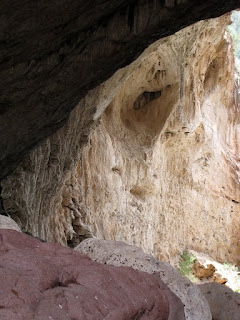 We all have wonders in our back yard that we never had the time to visit -- mostly because we didn’t make the time. Last year I resolved to stop running the rat race so hard and visit those places. Since then I’ve hiked in some ancient mountains near Phoenix: Piestewa Peak, South Mountain, McDowell Mountains, and The Superstitions. I’ve driven highways 60, 77, 87, and 17 past amazing roadcuts that reveal sedimentary layers -- twisted, intruded by volcanic sills and dikes, metamorphosed by a landscape that was accreted, uplifted, compressed, and/or stretched.

I’ve seen schist and igneous rocks that formed when terranes were sutured to North America about 1.7 billion years ago. They are topped by layers of limestone, sandstone, and shale that formed in the Paleozoic Era, when Arizona was covered by an inland sea. I’ve seen footprints of dinosaurs who walked in muddy riverbanks of rare streams that cut through a desert dominated by dunes. I’ve hiked through floodplains and basins full of sediment and conglomerates -- and ash from volcanoes. And now I’ve seen something everyone in Arizona should visit: Tonto Natural Bridge. Better visit soon, because it may close because of funding problems before you get the chance.

The oldest visible rocks under the natural bridge are the deep red rocks that look like solid play-dough. 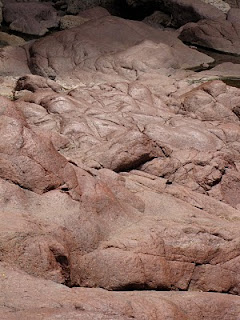 They are actually a volcanic rock known as rhyolite, a mixture with a lot of silica in it, stained red by hematite. They are generally thought to have formed about 1.7 billion years ago. A sandstone layer formed on top of this parent rock -- then the beds were faulted and tilted. Limestone formed up against that tilted ridge during the Paleozoic Era when a shallow sea covered parts of North America. You can find fossils from this era in the Payson area and below the Moggollon Rim. Finally, basaltic flows capped the whole shebang when Arizona moved over a hot spot in the mantle, about 30 million years ago.

A fault in the area broke the basaltic cap and allowed it to be eroded, forming a valley. Water from rain and melting glaciers percolated through the limestone and formed a travertine dam in the valley. The trapped water from a creek bored a hole through the travertine, and the bridge formed.

We hiked the Waterfall Trail to a spot where a spring tunneled through the side of the canyon and built new travertine structures with the aid of some moss. 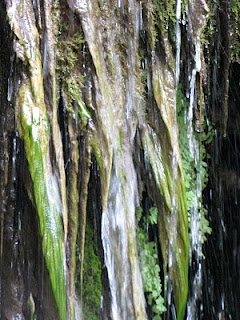 Then we walked around to the Anna Mae Trail and hiked down to the bed of Pine Creek. From there you have to pick your way through and over rocks, but it’s totally worth it. I went ahead of my hiking buddies (who were busily taking pictures), and had the good fortune to see the bridge in what seemed like complete solitude. A waterfall poured over the other side. The sight brought tears to my eyes.

Eventually, hikers from both sides of the bridge caught up with me -- we advised each other about which paths were the least treacherous. We made our way under the bridge and hiked out to the Gowen Trail side of the bridge, then out of the canyon. A storm was building on the horizon as we drove home again, reminding us of the erosional forces that helped form the bridge in the first place.

Arizona is struggling with the some poisonous politics these days -- it’s possible to forget the amazing beauty that surrounds us, and how incredibly lucky we are to live in a state that hasn’t been completely carved up and turned into piles of ash and rubble. State funds to maintain our parks have been raided recently, reduced to almost nothing. If we want to keep these sacred places, we need to craft legislation that won’t allow politicians to raid those funds again. But we also need to visit those places -- pay our fees, buy our year passes, shop in their gift shops, place donations in their boxes, sign up for their classes and events, volunteer for them . 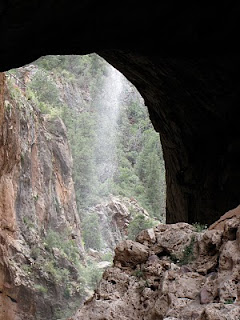 Tonto Natural Bridge only costs $5 to enter! You can drive up out of the heat of Phoenix in about 1 1/2 hours and have the experience of a lifetime.

Whether you live in Arizona or you’re just visiting -- take the time to see Tonto Natural Bridge. You’ll never forget it.