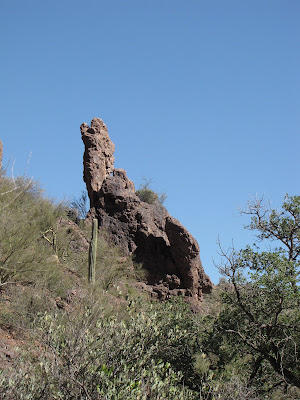 My husband and I just hiked one of our favorite trails: Peralta Canyon Trail in the Superstition Mountains. Each time we do this, the trail presents challenges, but also allows us to visit some old “friends.”

Take the Volcanic Tortoise. About the size of a Volkswagen Minibus, he is frozen in the act of climbing one side of the canyon. He may be the product of Caldera-type volcanic explosions that occurred between 8 and 15 million years ago, producing hundreds of feet of volcanic tuff (fused volcanic ash and breccia). If you've ever been to Frijoles Canyon to visit Bandelier National Monument, you've seen similar deposits. The holes in the deposits are from gas bubbles that were present as the ash fused and cooled. At Bandolier, the ash is Rhyolitic (it has a higher ratio of silica-to-Fe & Mg and tends to be colored tan to pink); in the Superstitions, the tuff mostly runs from Rhyolitic to Intermediate – though you can also find basalt there, suggesting that some of the magma in the original or subsequent volcanic activity was mantle rock. 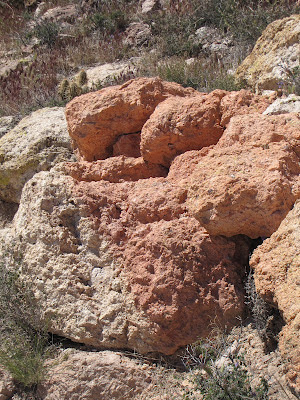 The tortoise looks almost black, though that may be from desert varnish. His jaws are open – maybe he was reaching for some yummy vegetation when he froze. He's at the lower end of the canyon, surrounded by thick desert scrub and saguaros. The vegetation and rock debris make it very difficult to venture from the trail (though some intrepid teenagers climb the hoodoos alongside it from time to time). That tortoise could munch down all day and still not make much of a dent in the brittlebush, creosote, and jojoba bushes.

Ernie and I find it challenging enough just to hike to the end of the trail and back. Ernie could go much faster if I weren't holding him back with my camera and my less-than-buff muscles. But what I lack in speed, I make up for in stamina – I can hike for about 7 hours, if I must, and if I get regular breaks. That's what I keep telling myself as every single person on the trail, young to old, passes me by. Alas. Good thing I'm not competitive, or I'd probably hurt myself trying to keep up with them. The situation also has its benefits; my SF-writer's brain thinks up gizmos that could help hikers with physical challenges (most of us, I suspect). Maybe a sort of body framework for hikers, with boots, knee-pads, elbow pads, and gloves? Something that would absorb the shock of each footfall, and maybe give us a boost as we're climbing? Imagine how far we could go, what we might see! Heck, some folks might even want to wear them when they're doing housework. Fashion could change drastically – we'd all end up looking like robots. 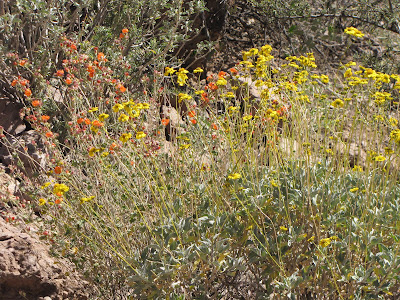 I long for this gizmo as I labor up steps that make my knees creak. People in their 60s and 70s smile at me as I step aside to let them pass. They've got hiking poles – I'm hoping that's why they're faster than me. And in the meantime, Ernie the Mountain Goat is forced to stop regularly, to wait for me to catch up. I also stop to take some photos, but I wish there was some way I could convey the wonderful smells of the desert in the spring. Some of the plants are fragrant even though they aren't currently blooming. A cool breeze blows, helping to alleviate the hot sun. And I can't help but ponder the hoodoos.

The most famous hoodoos in the Southwest are in Bryce Canyon, in Utah. They're composed of a mixture of silt, sand, mud, clay, and limestone that has seeped into the lower layers from above. The limestone caps on the formations keep the columns from immediately melting away from the top down – the sides erode first. Figures seem to be emerging from the monocline and marching into the valley. As moisture erodes them, they end up with a coating that looks almost like stucco.

But the hoodoos in the Superstitions are different creatures. They're composed of that volcanic tuff, so their sides are harder and straighter. Sometimes they almost look as if they were carved with a knife. Yet, they still have that characteristic hoodoo look, as if they were rock creatures who are engaged in an incredibly slow march. 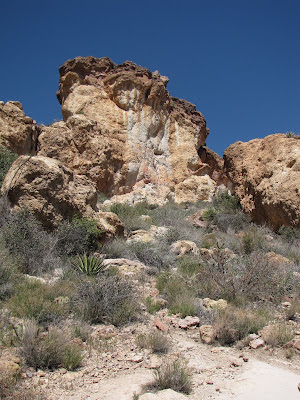 They line the top of the canyon on either side of the trail. Periodically, I stop to look at them, even talk to them (in polite tones). But I'm really looking forward to seeing one creature in particular, a goddess I call Belly Button Rock. I must thank her for letting me visit her enchanted valley, and hope for her blessing. I point her out to other hikers on the trail, who exclaim with wonder – they had never noticed her before, despite her profound presence (not to mention her fabulous midriff). Perhaps, in the future, they'll point her out to other hikers. 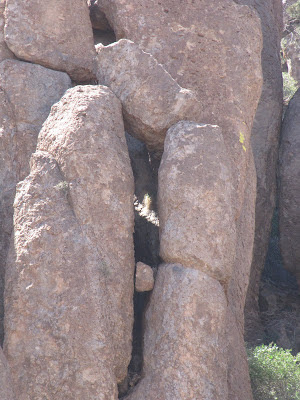 I stop to photograph some rocks that look like basin-and-range faulting in miniature. And I can't resist trying to capture a window of bright light shining through a formation. The last time I was here, I took hundreds of photographs – I was a budding geologist full of wonder. I still feel that way this time, but I don't need to snap as many pictures. Just as well, since we took 7 hours to complete the trail on the last visit, and it should only take 4 to 5. 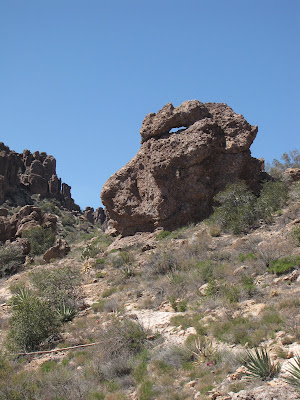 Labor up the switchbacks at the West end of the canyon, and eventually you'll wind your way around to the point where you can see the Blue-Eyed Baboon, a cheerful sentinel whose head pokes above the Northern side of the trail. Blue sky peers through a hole in the formation. Yes, the hills have eyes, and they are blue. 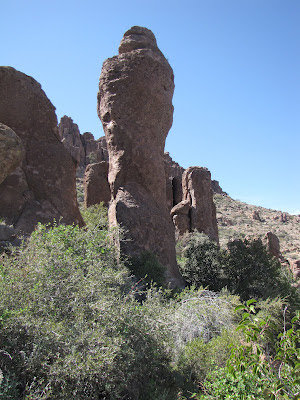 The end of the trail is Weaver's Needle, and you get to walk among some of the hoodoos. If you were intrepid, you could keep hiking until you reached the petroglyphs of the Hieroglyphic Trail. But that's a long time between restroom breaks, so Ernie and I turn around and face the challenges of the downhill walk, actually more painful than the uphill climb. That's when the knees, hips, and feet really begin to complain as your full weight comes down on them, step after step. I'm REALLY longing for that sci-fi hiking-framework gizmo now. But still happy with beautiful Peralta Canyon Trail. 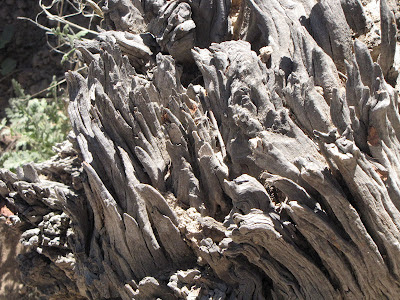 Still ready to go back again, every chance I get.

Posted by Emily Devenport at 6:59 PM No comments: