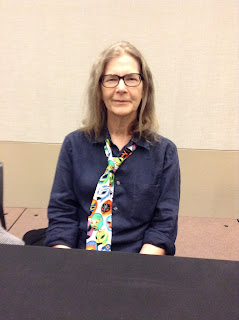 If you've read Medusa Uploaded, you've noticed that Oichi is a bit obsessed with music. I created a playlist for the annotated version of the book, but I thought some people might appreciate one with links. I've also included links to sites where good recordings can be purchased.

The list is probably not comprehensive. It may not even be entirely accurate. For the past several months I've been up to my eyeballs in the sequel, Medusa in the Graveyard, so most of my brain power has been hijacked. But I hope this list will provide a good jumping-off point for curious readers (who are also listeners).


Claude Debussy – Nocturnes, for orchestra (the best recording I've heard is on the Cala label, conducted by Geoffrey Simon with the Philharmonia Orchestra)


Gamelan music (try the album, Music from the Morning of the World)


Beethoven's 7thSymphony, 2ndmovement (Allegretto – though it has a lot more emotional impact when played slowly, like a dirge)


Gustav Holst – “Saturn, the Bringer of Old Age (my Default Majesty Music),” “Jupiter, bringer of Joviality,” and “Neptune the Mystic”


After you've checked out the Japanese Nō music on Youtube, look for The White-Haired Girl Ballet.


You may have heard Leopold Stokowsky's excellent arrangement of The Rite of Spring in the film score of Fantasia (the segment with the dinosaurs), but the original arrangement is pretty mind-blowing.


Duke Ellington – “Take the A Train” and “The Mooch”


I think I may have mentioned the main theme from the film score for Around the World in Eighty Days, composed by Victor Young. If I didn't mention it in this book, I definitely mentioned it in the sequel.


Irving Berlin – “There's No Business Like Show Business” (another piece that plays a big part in the sequel).


Sergei Prokofiev – scores from Alexander Nevsky and Ivan the Terrible


George Butterworth, “The Banks of Green Willow” (George died in the trenches in WWI, the same war that had such a profound effect on J.R.R. Tolkien)


I hope this list doesn't seem too long, and that you haven't gone cross-eyed trying to follow it. My ambition is to let people discover some new music or revisit old favorites. Once Medusa in the Graveyard is released (summer 2019), I'll do another one . . .