Zen and the Art of Desert Appreciation 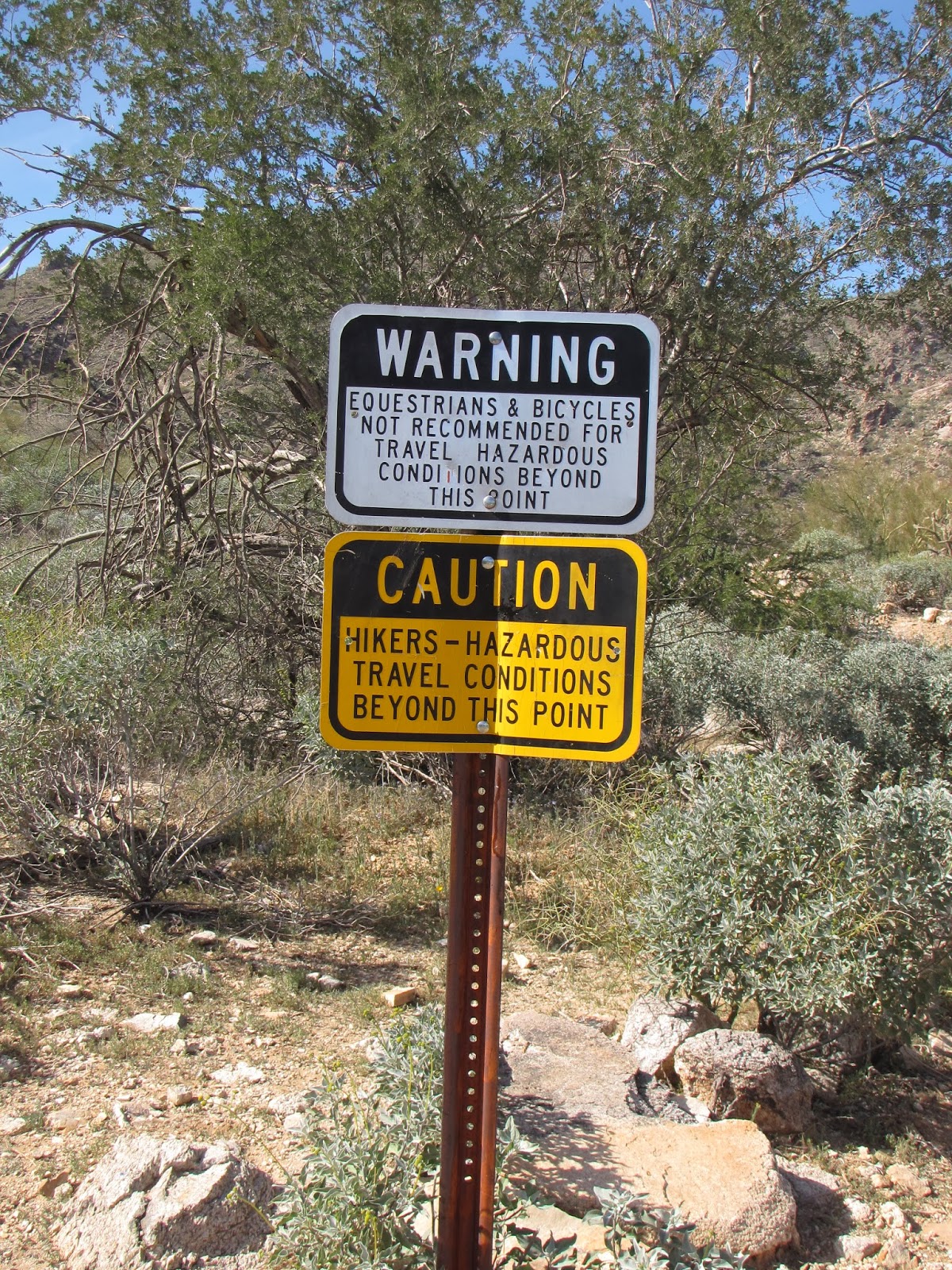 I'm a happy denizen of the desert, delighted by gnarly cacti, an abundance of tough creatures, and a lot of exposed rock – but I will admit that the desert is not for everyone. In fact, when I was a kid, I used to dream of living in a greener place. That was because I had never been to one of those greener places in the winter, and it was also before I had developed my passion for geology and its attendant dislike of landscapes that are “haired over” with green stuff that blocks my view of the rocks. Yet though my love of the desert has its scientific, geological/botanical side, there is another dimension to it as well, and that dimension is zen.

Zen is not a concept many people readily connect to the Sonoran Desert. Most folks picture garden shrines, moss-covered rocks, sapphire-blue pools and waterfalls when they think of zen (if they think of it at all). People don't tend to picture saguaros with twisted limbs and shattered, metamorphic-core mountains. But I would argue that zen is first thing you should think of when you're in a desert – especially in the summertime. When you are being blasted by that apocalyptic heat, in order to survive you sometimes have to stop thinking. You must simply be; it's the only way to endure the discomfort with any kind of patience. And that is a state of mind that usually only zen masters can achieve. That zen state of mind is the reason I was able to go beyond my scientific fascination with the desert and actually love the desert. 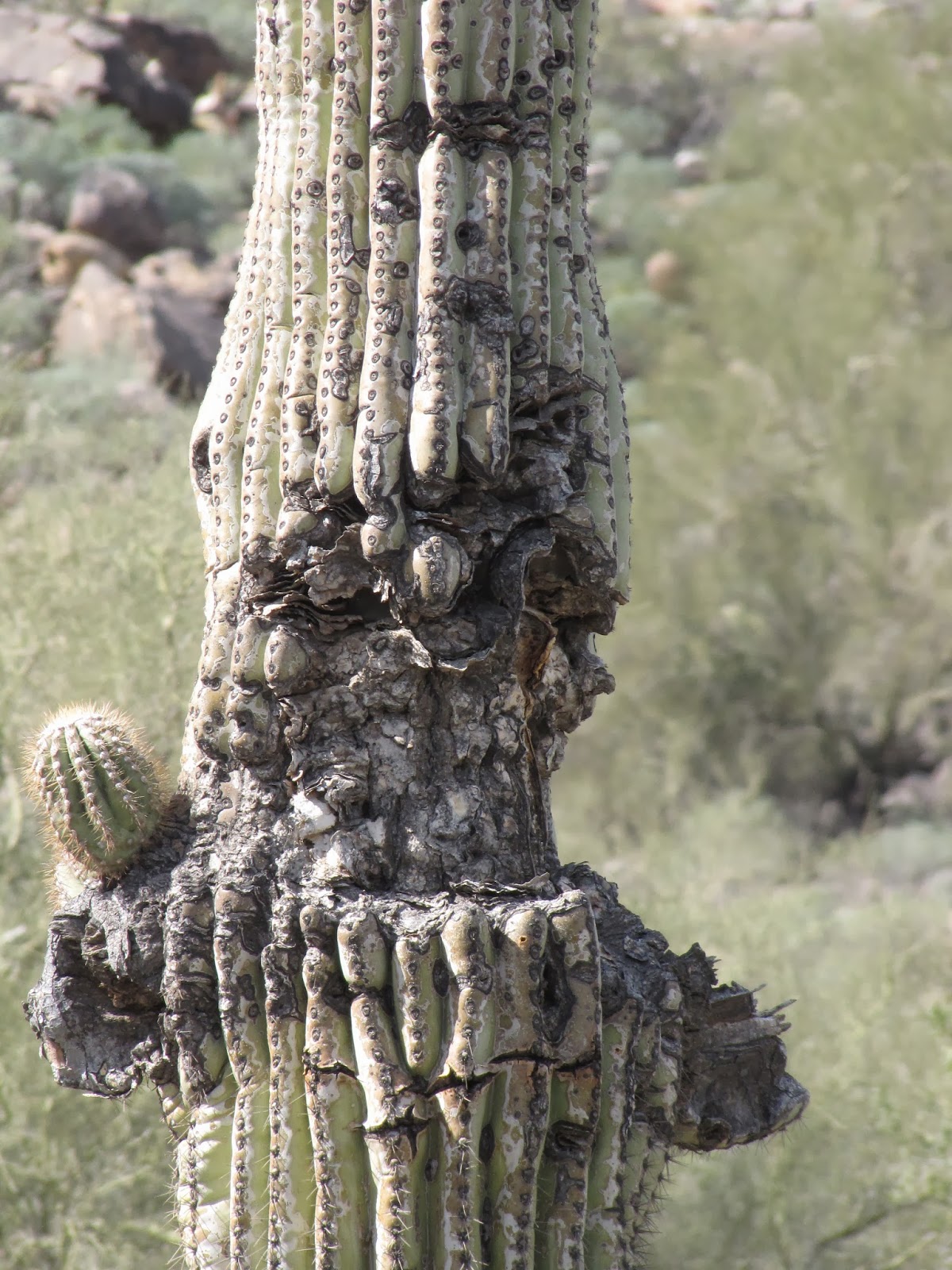 It was only when I was able to get past my discomfort, to sit quietly and observe the world around me, that I could see what was happening. 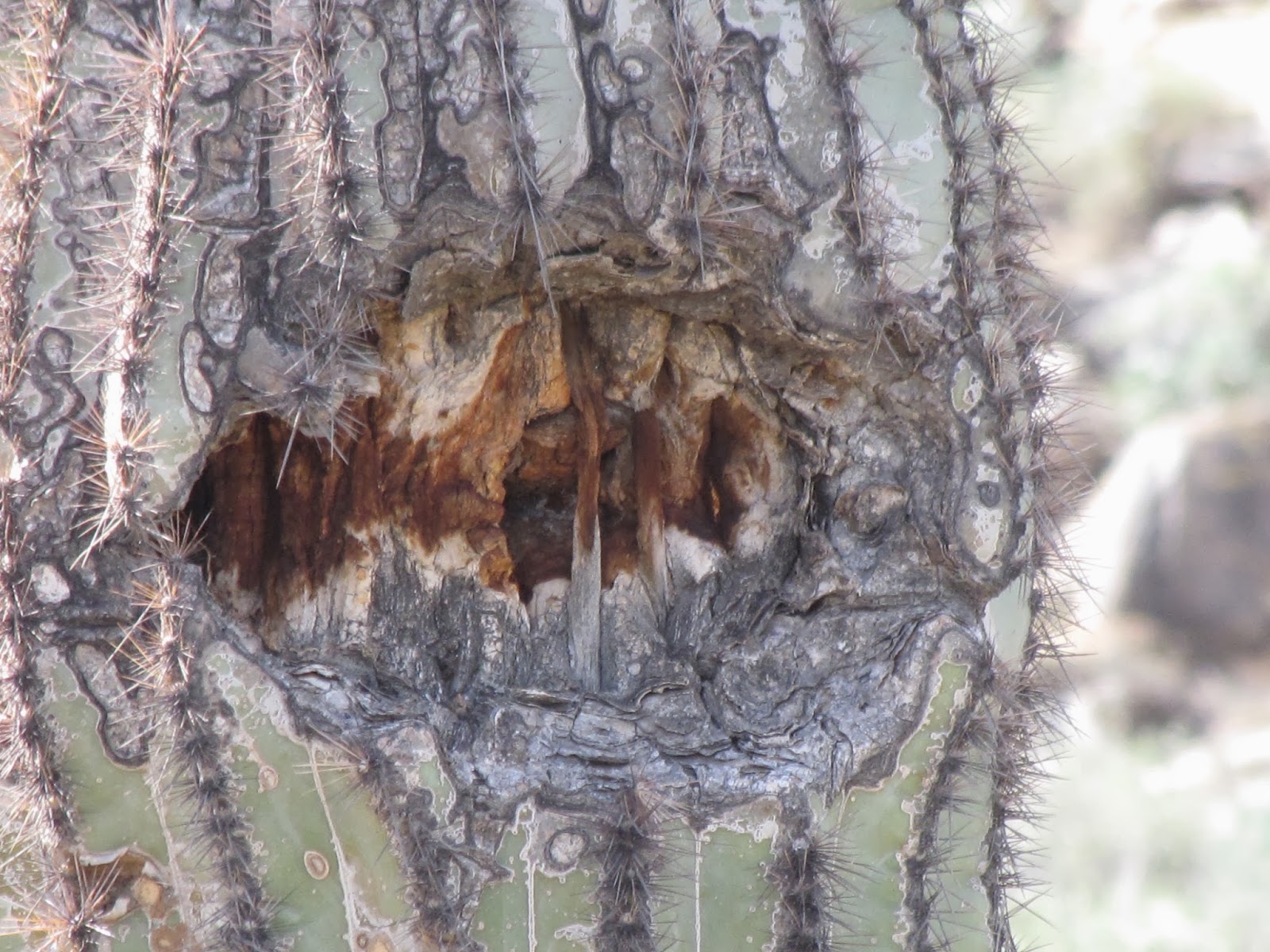 It wasn't until I shut down the noise in my head that I noticed the silence in the desert was full of sound and the emptiness was full of life. This is the sort of revelation that comes to you when it's 117° F, and you're sitting in the shade (where it's only about 105° F), sipping a Mega Gulp, thinking Wow – I could die out here, and suddenly you hear a bug that sounds like a tuning fork. That bug only makes that noise in the hottest, driest part of the summer, in the middle of the day. If you're in the right state of mind, that sound resonates with your soul. 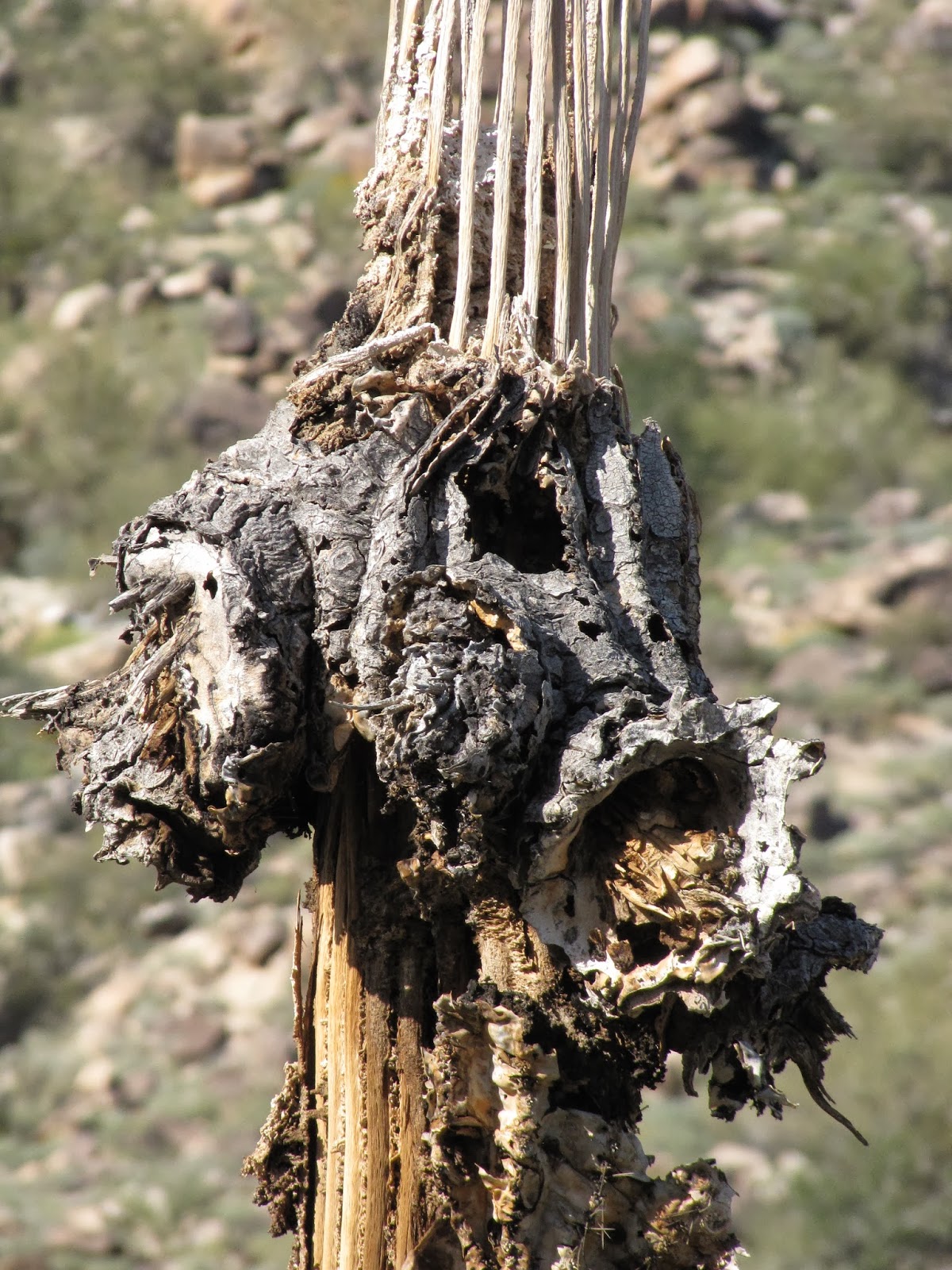 For some folks, one hot day that forces them to cling to life via a Big Gulp (at least 64 ounces worth) is enough to put them off deserts forever. But for some of us oddballs, it's like the gateway drug to a life of fascination with things gnarly, pointy, dry, and hot. 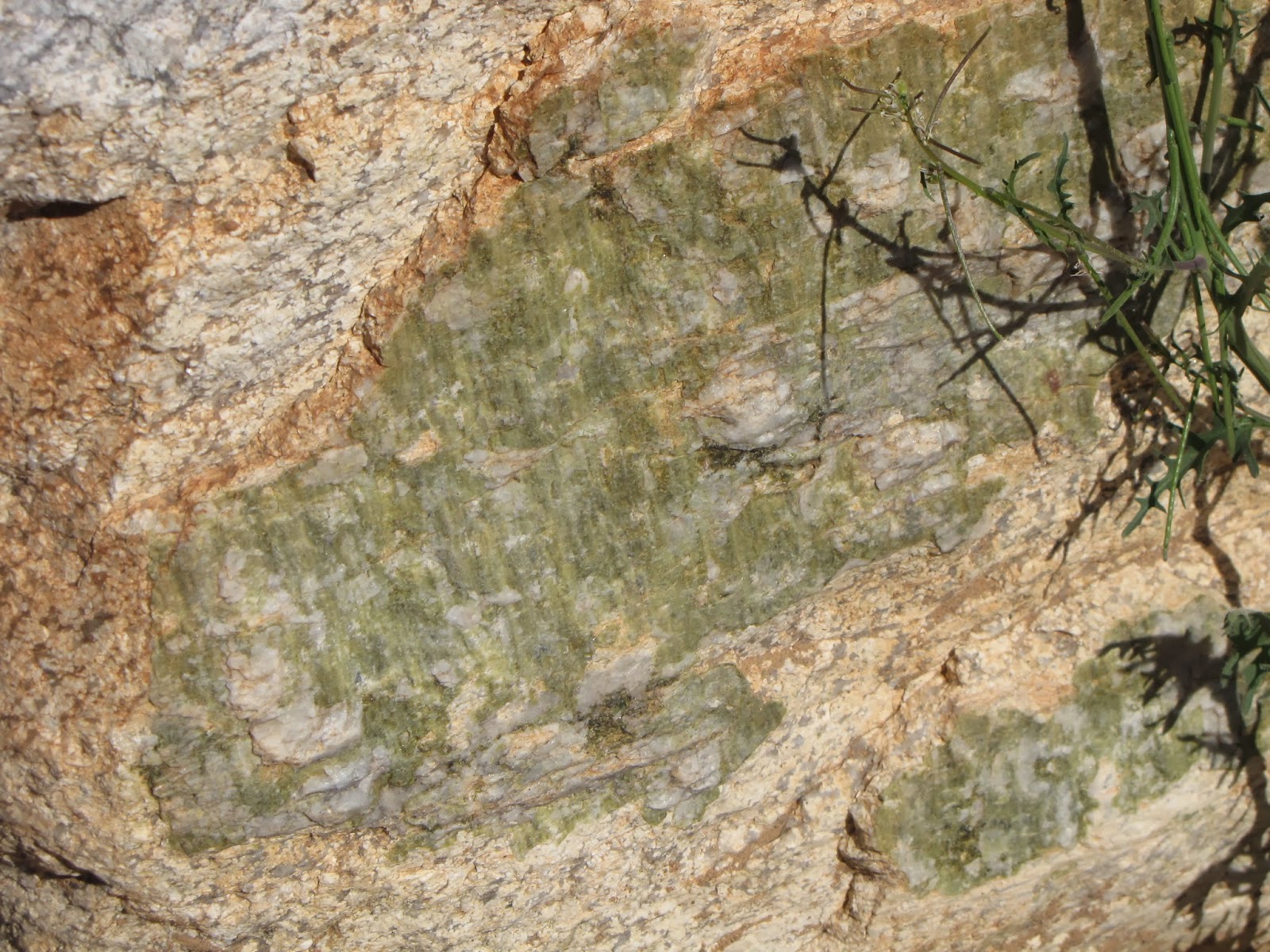 Here in Phoenix, Arizona, a desert junkie has many places in which she can satisfy her cravings. One of my favorites is White Tanks Regional Park. The White Tanks are a metamorphic core complex, meaning that early deposits of igneous and metamorphic rocks were altered by upwellings of new molten material, in this case in the mid-Tertiary period. The park is a haven for saguaros, petroglyphs, hikers, school field trippers, and mountain lions (not all in the same bus, of course). 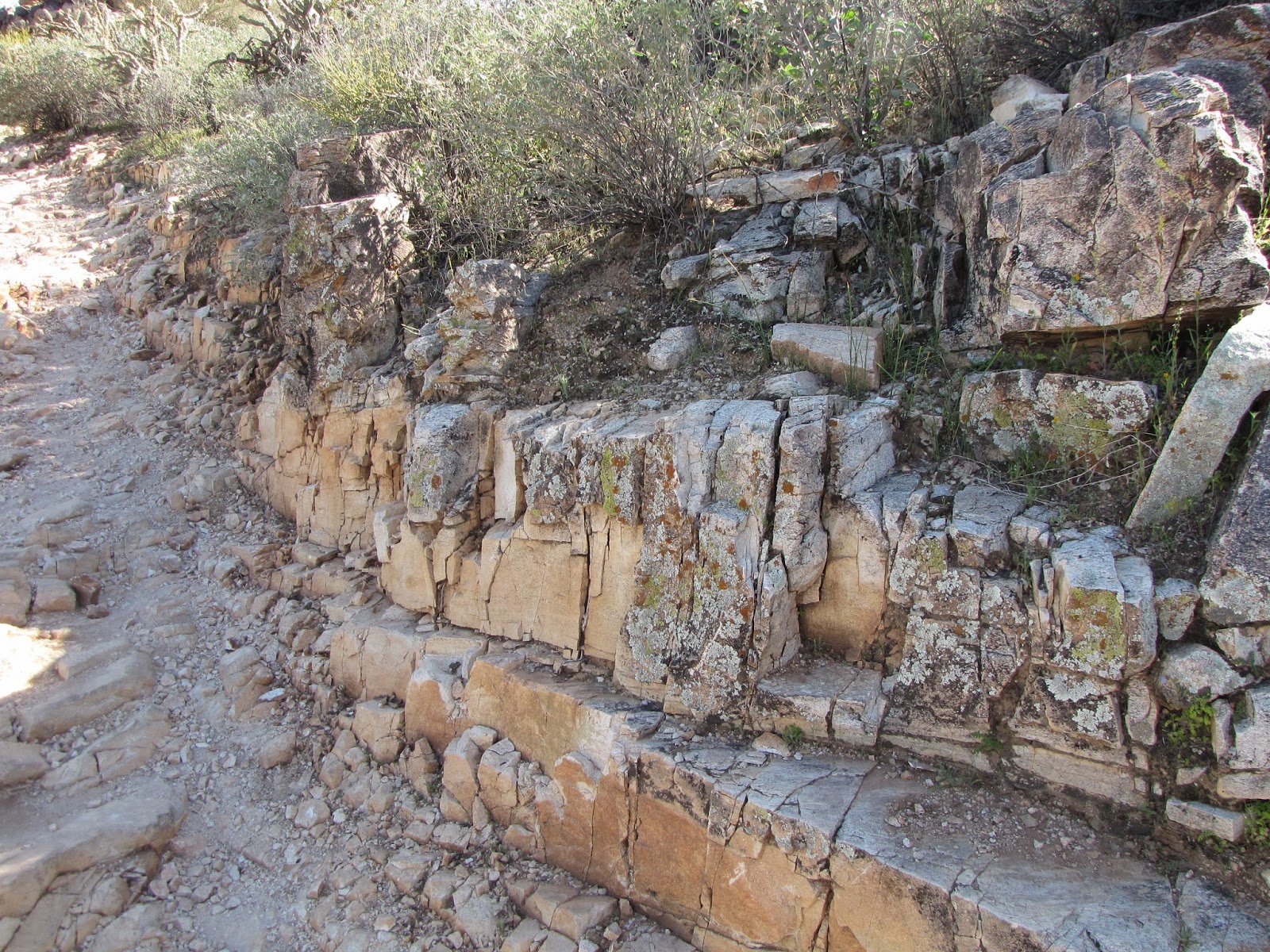 The hikes range from fairly easy to very challenging (the latter being the ones on which you could conceivably encounter the mountain lion). The best time to do them is from Mid October to mid April. Take a LOT of water if you're planning to hike for more than an hour, and if you're going any significant distance from the trail heads that have water fountains. Ernie and I usually take 1 ½ gallons of water each, (technically, we take 1-liter bottles, 3 to 4 apiece). 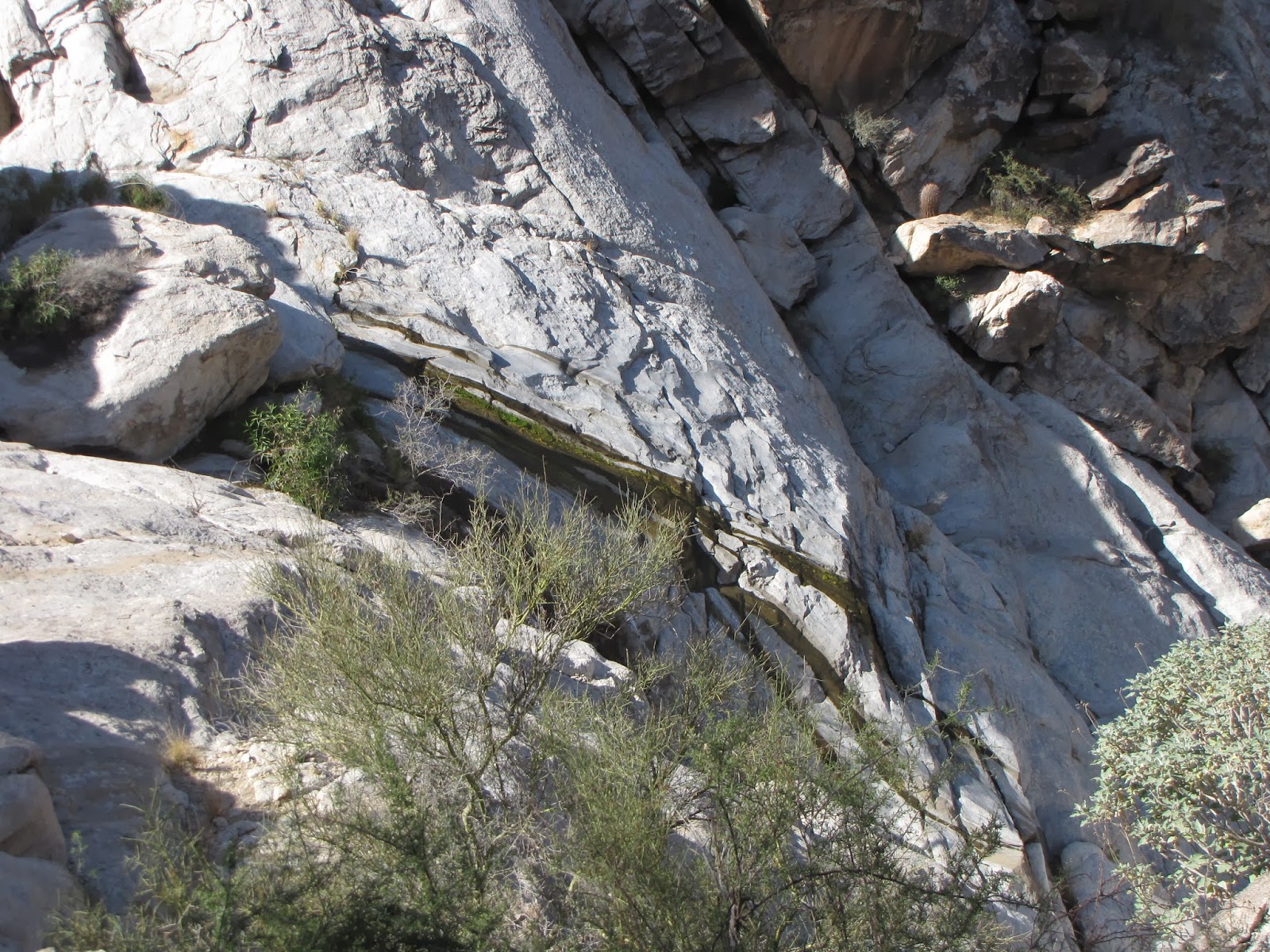 And don't forget to take a camera! It'll give you an excuse to stop and catch your breath at regular intervals. 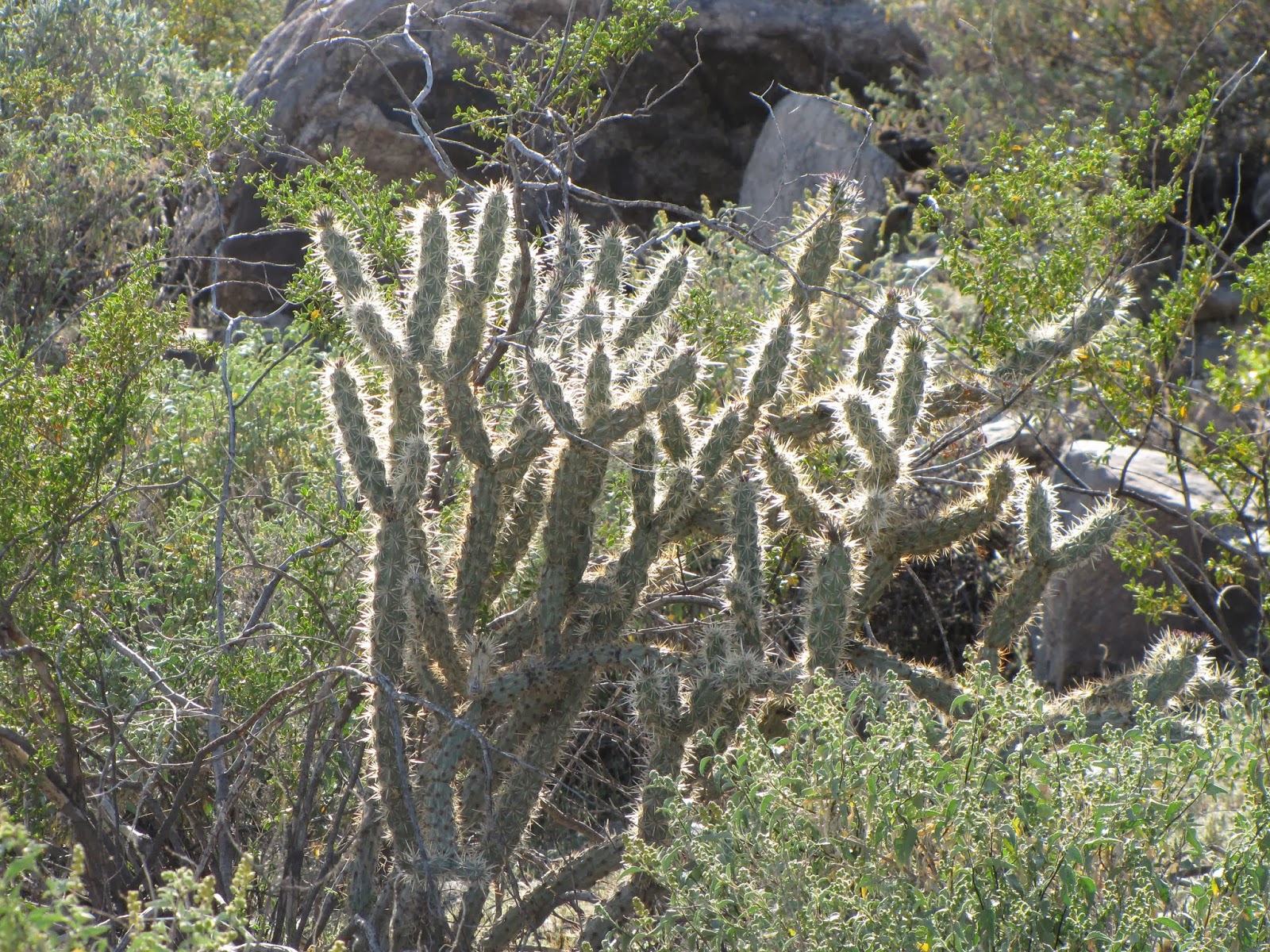 After all, zen only lasts so long. And then you need a Big Gulp. 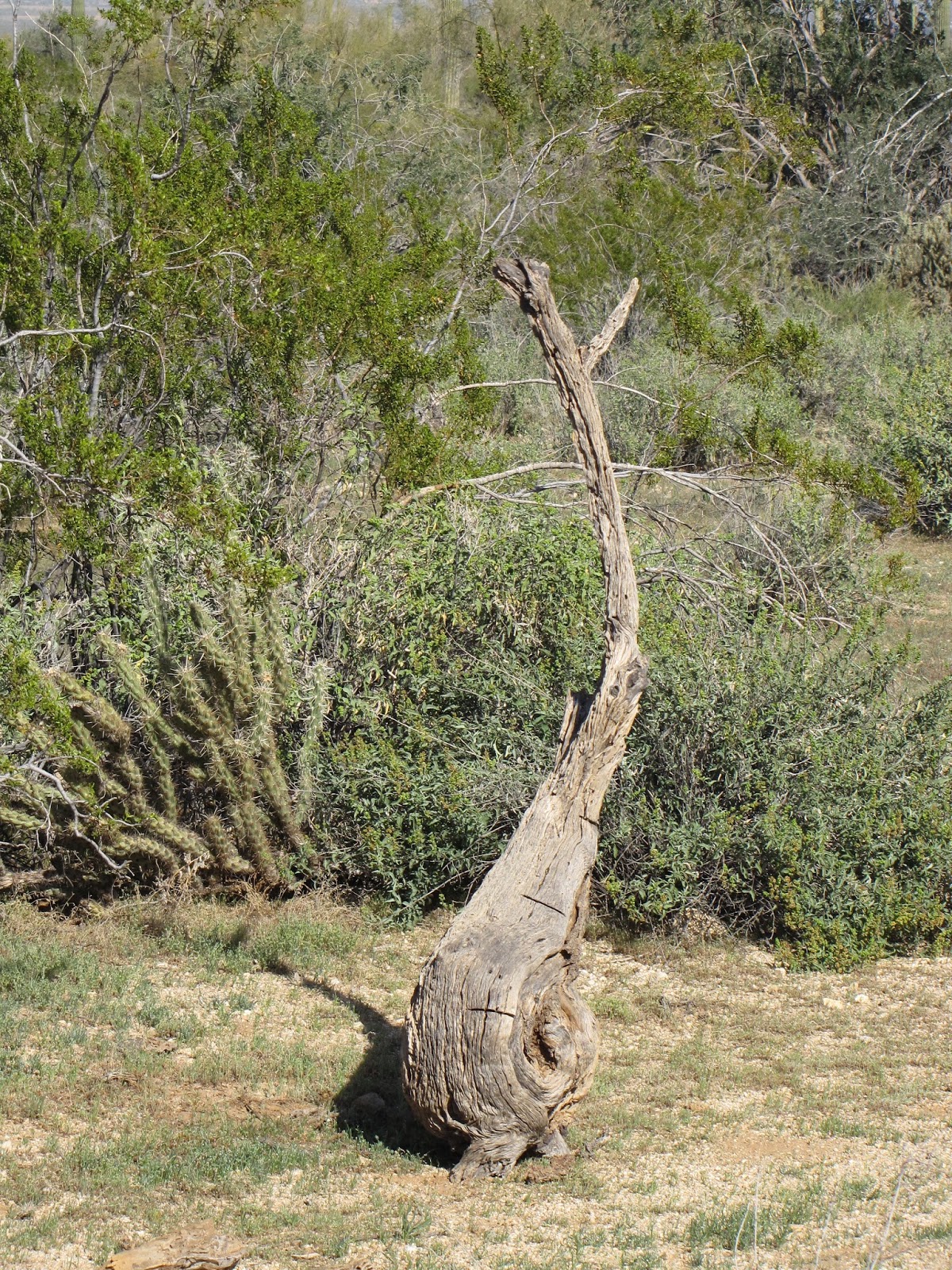 Posted by Emily Devenport at 10:16 AM No comments:

New Songs for an Ancient Instrument 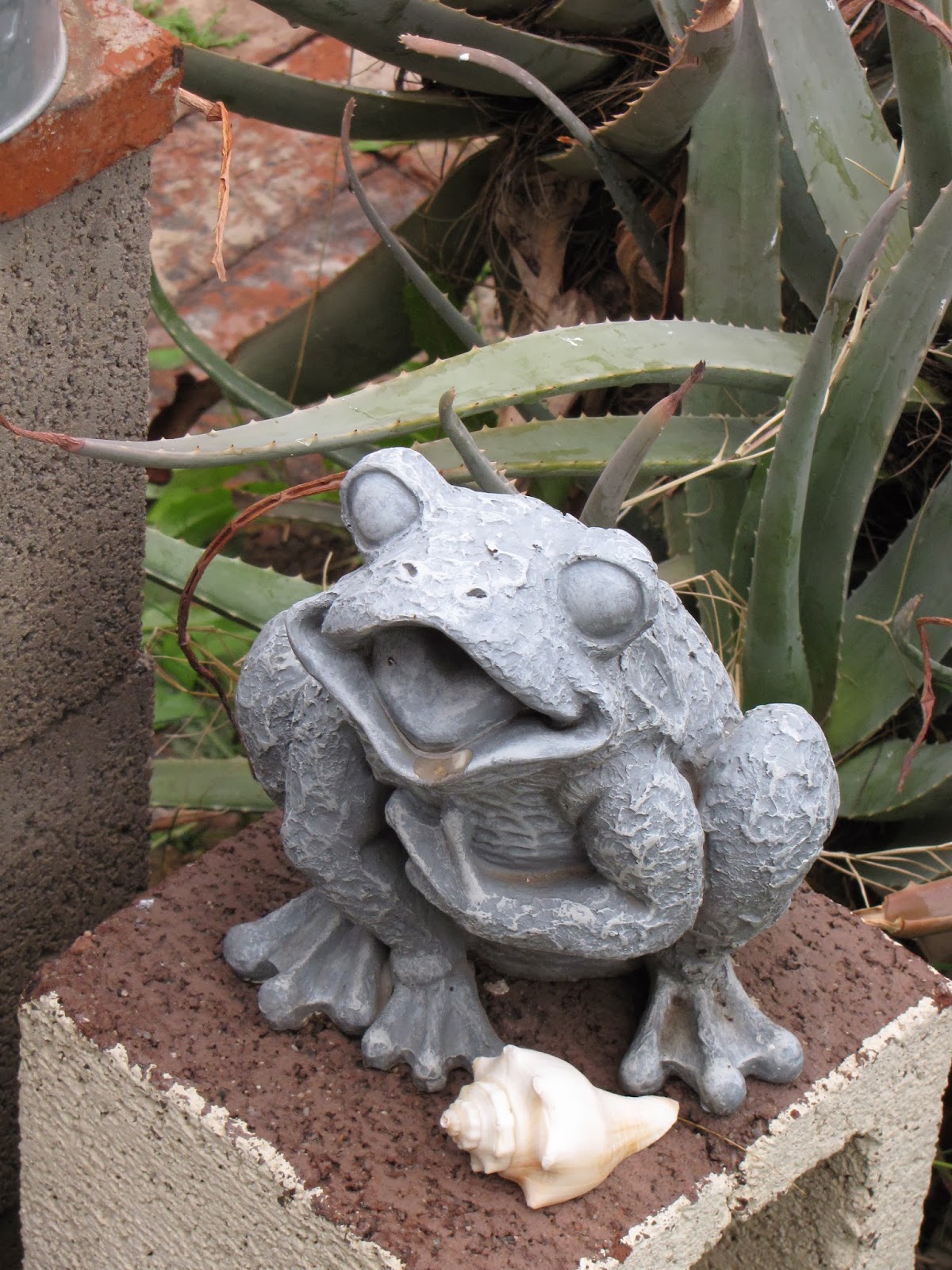 Check out Michael's new blog post about music and the price paid for loving it – just follow the link!

I have just written a brand new blog, revealing the complete story of how my interest in composing music first began, the tortuous teenage lovelorn loneliness which resulted in my very first musical composition at the age of 17...and some of the "magic tricks" I now use, in composing new music for my various models of the lyres of the ancient world!

Here is the URL of the new blog:

Posted by Emily Devenport at 7:33 AM No comments: 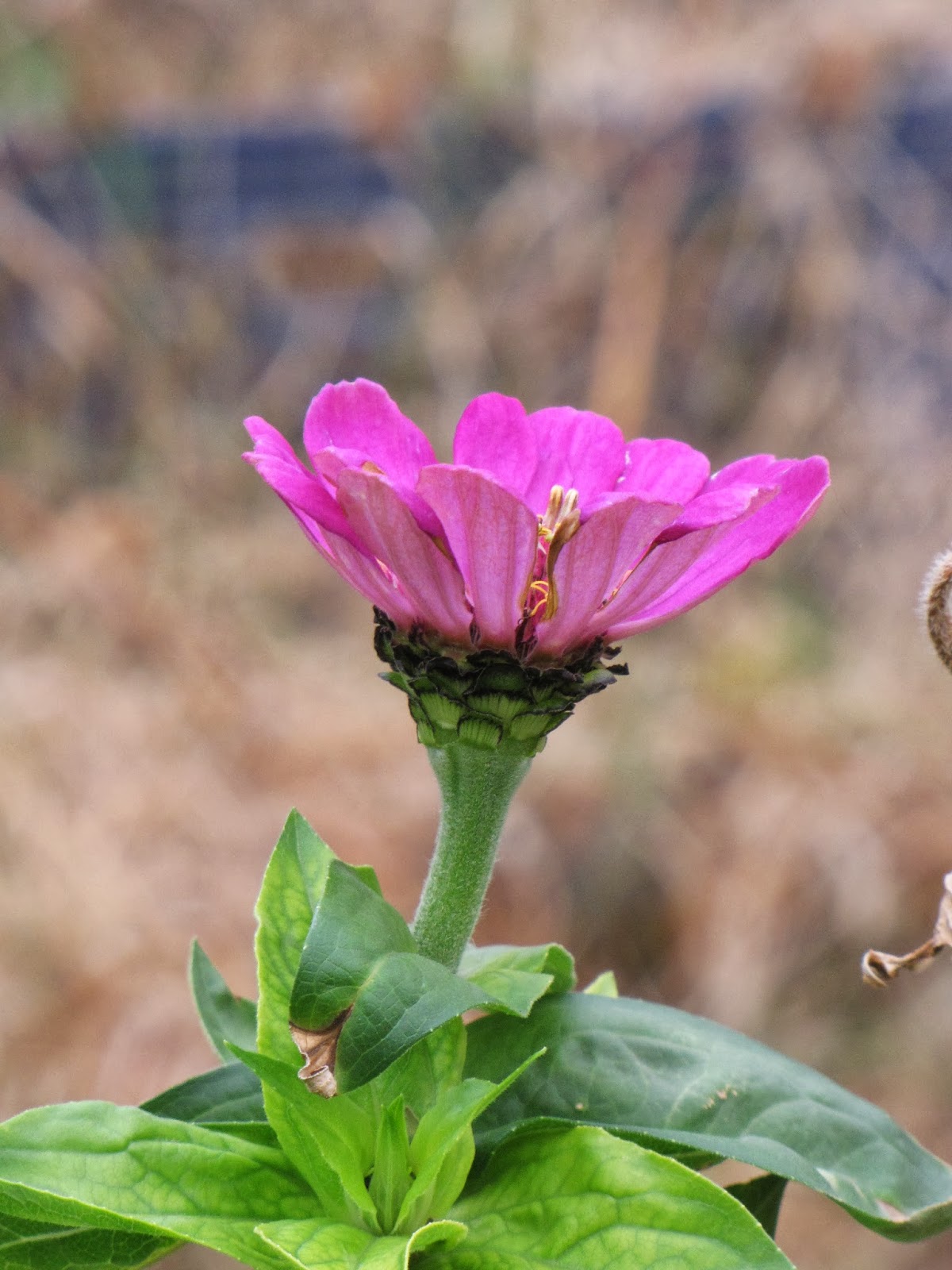 Check out Michael's new blog post about his discovery of the ancient Greek modes, and how they've continued to inspire his compositions. Follow the link below!

One of my greatest musical discoveries in my life, was to re-discover the long- forgotten magic of the original ancient Greek musical modes, once wrote about over 2300 years ago, by Plato and Aristotle...

The unique, individual character of these modes has been the back-bone of almost all of my original compositions for solo lyre since my first experimental release in 2010, which featured all 7 of these modes, in my album "The Ancient Greek Modes"
My brand new blog, detailing my experience of composing new music in the original ancient Greek Modes, can be read here.

Posted by Emily Devenport at 7:52 AM No comments:

Michael Levy's Transformation into Orpheus (But Without the Misadventure in Hell) 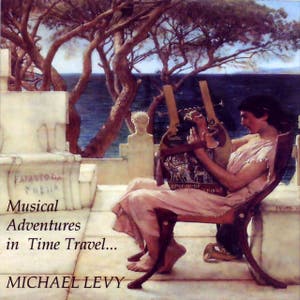 Visit Michael's blog and find out what drives a guy to not only love ancient music, but to seek reproductions of ancient instruments. After all, if you want it done right – do it yourself (sort of)! Follow the link below . . .

The Inspiration behind my "Musical Adventures in Time Travel"...

I have just written a brand new blog, detailing the complete story of how my fascination with ancient music began and what inspires me about the ancient world, the first time, as a child,  I imagined what the long-lost lyre of antiquity may once have sounded, the rekindling of my childhood fascination with this instrument - and the continuing story of how my albums came to be recorded, from the humble beginnings of my Youtube Channel in 2006! The new blog can be read here

Posted by Emily Devenport at 8:00 AM No comments: