A Holiday Release, a Recreated Kithara, and the Hurrian Hymn 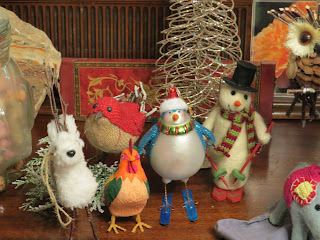 Michael Levy has a new album out in time for holiday gift-giving! Follow the links and get to ordering!


Kithara of the Golden Age
I am pleased to announce the release on all major digital music stores and streaming sites, of my new album, "Kithara of the Golden Age". The sequel album to "The Ancient Greek Kithara of Classical Antiquity", this album also features the wonderfully recreated kithara of the Golden Age of classical Greece, complete with its reconstructed 2,500 year old vibrato mechanism, handmade in modern Greece by Luthieros:  http://en.luthieros.com/product/cithara-of-the-golden-age-ancient-greek-cithara-9-strings-top-quality-handcrafted-musical-instrument  The album features original compositions in the original ancient Greek modes, in the wonderfully pure just intonation of antiquity.

Since the kithara is so suited to accompanying the human voice, although I am by no means a professional singer, as in my previous album featuring the kithara, I have added simple vocal lines, to hopefully provide an evocation of how the kithara once may have accompanied the singing of the professional musicians of ancient Greece.

Here is the brand new webpage I have just this minute created, featuring the free download link of the PDF booklet of detailed album notes, my first 'promo' video for the album now on YouTube and all the main purchase links on both the major digital music stores and streaming sites:

http://www.ancientlyre.com/ancient_greek_themed_albums/kithara_of_the_golden_age/
Any new album reviews on any of the major digital music stores would of course be like a 'libation to Apollo' in aiding my daily efforts as an 'independent artist', to honestly promote my lyre music to the rest of the unsuspecting world - please feel free to share with the rest of the known universe...thanks for you continued support in my ongoing musical mission, everyone!

Finally, in closing, during my recent updating of my website, I have also recently posted a brand new news bulletin, documenting the incredible chain of global events which have occurred, since one miserable February evening in 2008, I decided to upload my first YouTube video of my arrangement for solo lyre of the 3,400 year old Hurrian Hymn, the oldest fragment of written music so far discovered, in human history - as recently featured in the Daily Mail, Fox News network, Classic FM and even in the NME mainstream pop and rock magazine:

Amazing what magic can be conjured, from nothing more than a miserable 10 quid mono PC mic and quite possibly, the oldest known webcam in human history!

Season’s greetings, everyone - warmest wishes from the freezing UK!
Posted by Emily Devenport at 5:21 PM No comments:

The Good and Affordable Stuff -- Updated for 2016! 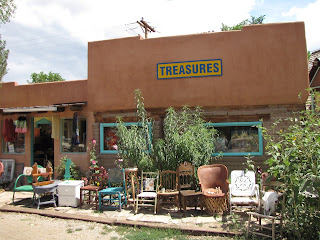 I posted the original version of this report a couple of years ago, but I thought I'd better keep updating it.  A few things usually change, and some things remain the same.  One of the things that stayed the same this year was price range (for the most part).  All but one of the shops that I visited had the same, ultra-low prices, ranging from  $1 per item to $15.

Our favorite used book store in Santa Fe disappeared, last year but this year we found a sign promising it would make a come-back -- so watch this space next year. Ernie made out like a bandit in the book department, finding good buys at all of the thrift stores we visited.

So here is the post that started this tradition: 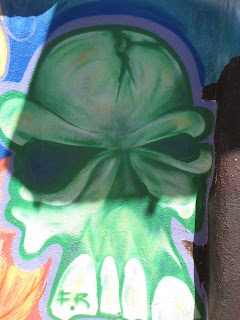 In the last quarter of the 20th Century, a gal used to be able to find wonderful little shops in Albuquerque, Santa Fe, and Taos. These shops carried handmade jewelry, unique clothing and shoes, art and folk art, perfume and lotions, books and nick-nacks, pots, plates, wind chimes, fossils – you name it. The cost of the items started at $2 and went up to a few hundred dollars, but you could get quite a lot in the $15 to $45 range. My mother and sister and I looked forward to visiting these shops every time we visited New Mexico.

But many years have passed since those days, and recently a woman came into the Heard Museum Book Store during my regular shift and asked me if there was a shopping district like that in Phoenix. She told me that visiting those quirky little shops used to be one of the highlights of her trips in the Southwest. Lots of cities had them; locally we had the Mill Avenue shops in Tempe, and Tucson had its own shopping district near 4th Avenue. Flagstaff still has something resembling a cheap-and-fabulous shopping district, but not to the extent you would have found back in the 1970s and '80s. “What happened?” the traveling lady asked me. “Was it the economy?” 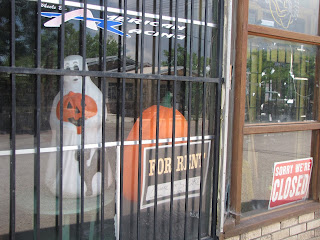 I suspect it was the opposite. Those shops were enormously popular. I think the landlords who owned that property decided they should raise the rents. They raised them so high, the owners of those little shops couldn't pay. In New Mexico, expensive jewelry, rug, furniture, clothing stores, and art galleries moved into those spaces. The top 5% of the population can afford to shop there now. The rest of us seem to be out of luck.

It's sad to see our paradise lost, but there are some alternatives for those who are willing to hunt a little harder. My search always starts with thrift stores. Prices there usually run from $1 to $15 for clothing, and quite reasonable for a gamut of other stuff. Places that advertise themselves as consignment stores or vintage clothing shops often charge more, but their items still cost considerably less than what you'll find in the expensive stores in the shopping districts. Second hand shops also run the gamut, price-wise, but are always worth investigating. And some of them carry new work by local artists and artisans. 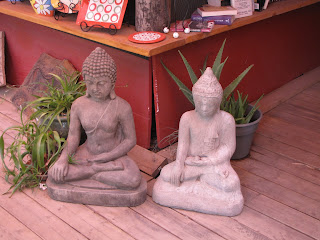 Here are some of the places my mom and I have discovered in New Mexico: 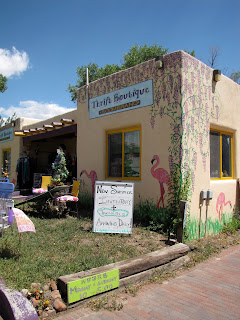 BOOMERANG THRIFT BOUTIQUE in Española carries a wonderful variety of hip clothing, including smaller and larger sizes. While we were there, they were running a sale, so we got our items for even less. The price range was $1.50 to $9.50. They carry an eclectic selection of other second-hand items as well. They're on the southbound side of HWY 84-285, near the southern end of town.


THE WATER STORE in Española is under new management and has re-opened as of this publication.  They have a thrift section stuffed full of clothing priced from $1 to $4. If you're in the area, it's worth checking to see what's going on with them – they're on the northbound side of HWY 84-285 that leads through the town to Taos. 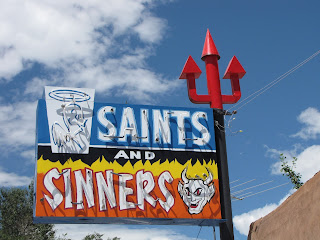 Habitat for Humanity Thrift Store in Española has updated its dressing room, so it's more comfortable to try things on in there now. That shop has one of the best selection of Ladies' pants/slacks I've ever seen.  I bought five pairs from them last year, at $1 apiece. 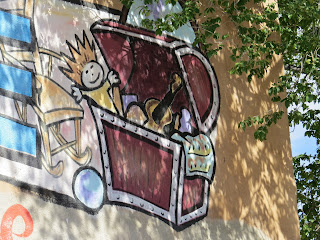 In Taos we always check out the COMMUNITY AGAINST VIOLENCE store on 1046 Paseo Del Pueblo Sur. From the road, you simply see a sign that says CAV. This year they only had half as much clothing as they did last year, but my mother and I both found a few things we liked, and they're worth checking out. 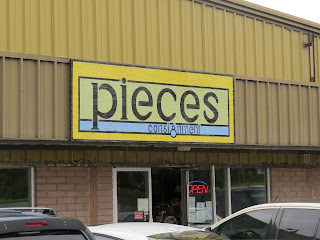 On the other side of the street at 1024 is a consignment store called PIECES that has a trendier selection than most of the other thrift stores.  Their prices are very reasonable, from $5 to $45.  I found several fabulous blouses there this year (2016), and my mom found two gorgeous skirts and a couple of blouses. 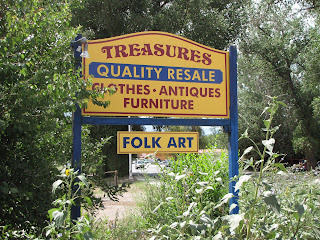 TREASURES, located much farther North on Paseo Del Pueblo, is always worth a visit, though we have only bought a few items of clothing there. She also carries antiques and folk art from local artists; she specializes in the quirky and unique items.  I bought two blouses from her this year, paying more than I usually do for thrift clothing, but they were gorgeous and would have cost far more in an upscale shop.  And she has a lovely little garden out front. Just up the road from her (going north) are a couple of affordable import stores, like the CAMINO REAL IMPORTS AND GIFT SHOP. They've still got that Jesus sale going on (see photo below). 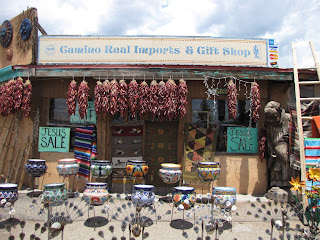 As you're headed out of town toward the High Road To Taos Scenic Highway, you'll see THUNDER LIZARD DIRECT CORAL IMPORTERS. They specialize in beads, so if you're a bead junky in recovery, don't go in there. 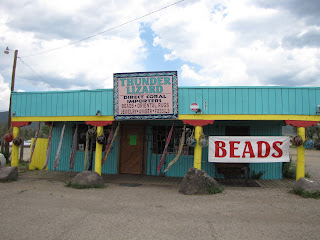 In Santa Fe, there are a lot of thrift stores on the southern end of town on Cerrillos Road, and you don't have to drive near the complicated tangle of the main plaza to visit them. These shops include GOODWILL, one of my favorite thrift store chains. I love the way they organize their stuff by color. GOODWILL discount days vary from place to place, so expect blouses to cost about $4.99 to $5.99 when they're not on sale. 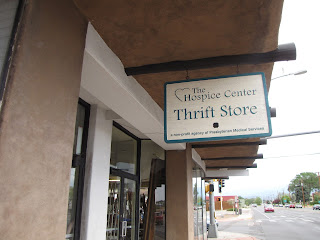 The HOSPICE CENTER THIFT STORE AT 1303 Cerrillos Road offers clothing and antique/collectible items, and their clothing is always 2nd-hand fancy stuff. They were having a 50% off sale the day we visited, so we got several gorgeous items for a steal. Call them at 505-473-0972. 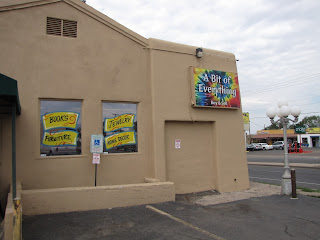 If you want a break from clothing shopping try A BIT OF EVERYTHING at 1836 Cerrillos Road. They don't have anything you can wear, but they're a 2nd hand/antique /collectible emporium that offers – you guessed it, a little bit of everything. You can call them at 505-983-0665. 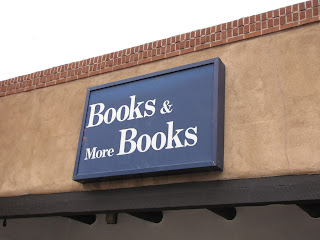 So yes, the halcyon days of cheap and fabulous, quirky and hip shopping districts are gone. But it's possible to roll with the punches. And though people who have to shop for smaller and larger sizes sometimes don't have as much luck when shopping for second hand clothing, thrift shops usually offer more than just apparel. These are the places you might find pretty dishes, garden décor, books, etc. Second-hand book shops are always worth investigating, and they could use your patronage. 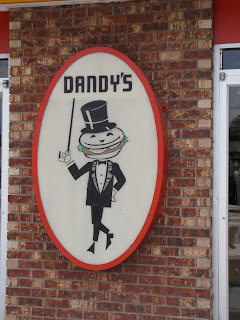 Posted by Emily Devenport at 3:07 PM No comments: