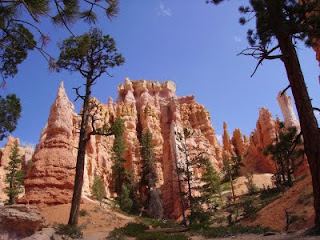 You don’t need to read Jack Kerouac to know that road trips can change your life. In August 2008, a road trip changed mine. 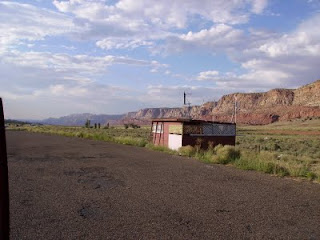 But here’s the thing, I’m not sure you can plan a thing like that. You can hope for it, and ever since the movie Easy Rider was released, plenty of people have. But me? I just needed a vacation. It had been years since I had gone out and actually seen a place, other than Disneyland. Not that I don’t love Disneyland, in fact I love that place as much as I did when I was a child, for no rational reason whatsoever. I love visiting Ernie’s family, too; they’re wonderful people, way better than I deserve. It’s just that when I was a kid, I used to visit wild places. And even as a kid, my soul responded to those places, my heart pined for them (even if they didn’t have pines). You know the religious feelings some people get when they’re in church, or looking at sacred art, or listening to the Mormon Tabernacle choir singing Hallelujah? I only get those feelings when I’m looking at a canyon. 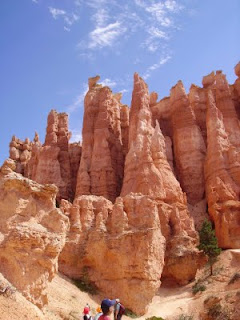 When I was a kid my mom took us to Yellowstone, Bryce, Zion, the Grand Canyon, and let’s not forget good old Oak Creek Canyon. But as an adult, I found it a lot harder to travel to those places. Or any places. Or to buy groceries and pay rent, for that matter, because I was a writer. Writers don’t have any money, so I had to get a day job. After that I was too busy working, and the years flew by.
Finally 2008 rolled around, and I noticed that WorldCon was in Denver. "Say," I remarked to Ernie, "wouldn’t it be neat if we drove to WorldCon via Utah and saw some national parks on the way?" 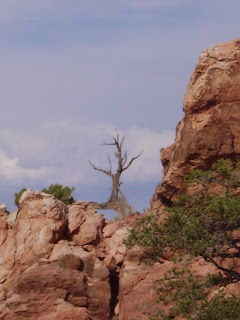 He agreed it would be nifty. And we managed to talk two friends into taking the trip with us, Chris and Nora. They were even willing to share a room when the rates were too expensive. So we picked our dates, and we plotted our course, and Nora called all the hotels to make reservations. Ernie and I began to take morning walks so we would be in shape to explore canyons, and finally the first day of the trip dawned. Chris and Nora drove up in a rented SUV Chris dubbed "The Battlestar Ridiculi," and we all piled in. 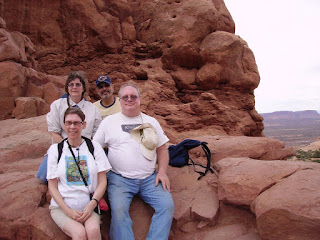 I should have had some clue what this was going to mean to me when I was almost too excited to sleep the night before. Jeez, how desperate for a vacation can you get! That morning I was in a daze, so happy I hardly recognized the emotion. And as we drove North on I-17 in the Battlestar, I thought, This is really happening! It wasn’t just something we talked about doing some day. We were On The Road. 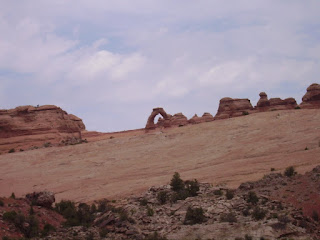 As we turned onto Route 89, we began to pass some of the formations of Vermillion Cliffs, and the music from Ralph Vaughan William’s Double Piano Concerto started to play in my head. Yeah, I know, most people think of the Grand Canyon Suite when they see Arizona, and I don’t blame them. But Vaughan Williams wrote music that evokes beautiful desolation, and I think that sums up Arizona and Utah perfectly. We skirted those formations for miles and miles, rank after rank of them, and I didn’t need to read a book, didn’t need to play an album to be entertained. 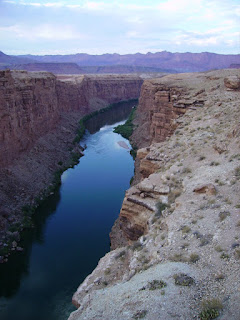 When we crossed the Colorado River, we stopped at a convenience store to buy sun hats, and then we went onto the bridge to look down at spooky bubbles rising from the depths of the river, which moved very slowly there. The sun was just beginning to drop behind some mountains, and it shone on the Eastern stretch of the river. For me, standing on that bridge was like standing in a temple. I felt awed by the silence of the place, by the sense of incomprehensible age. I was also scared of the height, and fascinated by the massive, concrete bridge with its steel struts. 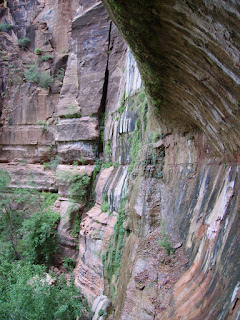 As we drove toward Kanab, Utah, I watched the light dying in the sky and wished the sun were coming up instead of going down. I haven’t felt that way since I was 10. And frankly, it’s a little nuts, because I really need my sleep these days. But that night, I just savored it. Pure happiness. And – dare I say it? Even better than Disneyland. 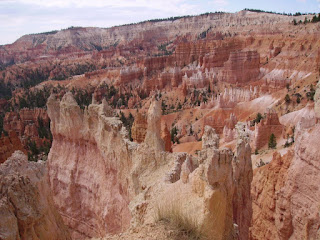 From that point forward, I knew my soul had just gotten a gigantic jolt, a charge that will last for the rest of my life. That first day we hiked in Zion, we visited Coral Pink Sand Dunes, we read all the roadside markers at the viewpoints and collected free literature. And I bought geeky t-shirts. The next day we drove to Bryce, possibly my favorite National park in the whole universe, and we hiked in the Queen’s Garden, Hoodoo Heaven. It was just outside Bryce that I was shooting pictures of clouds and captured the Cosmic Question photo I featured in a previous blog. 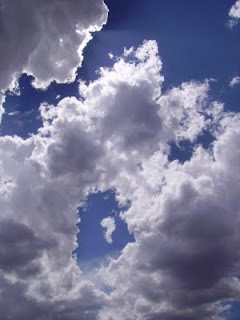 And even when Routes 12 & 24 ended up taking twice as long as we thought they would, I didn’t care. They took us through the Northern region of the newest national park, The Grand Staircase / Escalante. Once again, I was happy to just look out the window. I wish we could have seen Capitol Reef – we’re planning to go there in May 2010, but that night we hauled ass all the way to Moab, the wonderful town perched between Arches National Park and Canyonlands. What I saw in those wild places made me feel like a pilgrim in Mecca. 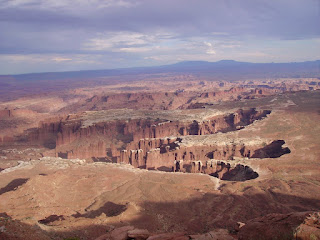 So I felt more than a little let down when we finally rolled into Denver for the convention. Though my buddies were so happy, I had to stop moping and enjoy nifty downtown Denver. And for a consolation prize, I got to see the rain going sideways because of a small tornado outside my hotel window. Cool!

By the time we left Zion, I already had the beginnings of a new novel in my head. By the time we left Bryce, I had begun to write a treatment for it. Every night in Denver I added more, and I had 100 pages done by the time we got back to Phoenix. I’m still working on the novel, but I have something important to do before I can feel confident that I can write it as well as it can be written.

I have to become a geologist. 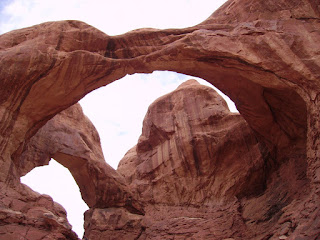 I don’t mean a working geologist, but I have to study geology, both in college and out of it. I want to learn everything I can about the subject, because I love it. And I want to keep going back to those places that inspired me, and see new places, and see old places with new eyes. Ernie and I have started hiking in and around Phoenix now, we’ve hiked the magical Piestewa peak, right in the middle of town, a place where the world seems to go away. We’ve hiked Peralta Canyon Trail and we’ve seen Belly Button Rock (and I fell in some horse poop, but it was totally worth it).

That road trip changed my life. It revived a passion in me that doesn’t war with my other passions, that adds to them instead of distracting me from them. And maybe most importantly, it allowed me to realize my own version of religion. Call it Canyon Religion if you want. Not a woo-woo, New Age kind of Canyon, but something very, very old. Something you feel when you stand on that bridge looking down at the Colorado River, something strong enough to overcome vertigo and fear of spooky bubbles.

Posted by Emily Devenport at 7:05 AM