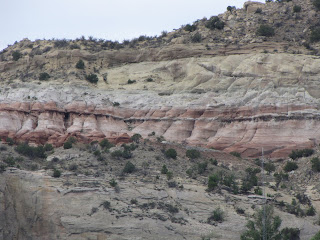 New Mexico is just not a big city kinda place. Even Albuquerque is more like an oversized town. Once you head North toward Santa Fe and Taos, you find a lot of towns dotted throughout the hills, many of them little more than dents in the road. Truchas is one of those dents.

The Truchas Farmhouse is an Inn that my mom fell in love with about 20 years ago. She makes a pilgrimage there every year, usually in August, just when we're starting to feel completely fed up with the heat in Phoenix. Mom loves the farm and the little casitas at the Inn, but she especially loves the lady who owns the place, Frutoza Lopez. Frutoza possesses a rare wit, and she and Mom like a lot of the same novelas (Spanish-language soap operas) and a lot of the same old Mexican songs.

Truchas was the inspiration for Siggy Lindquist's home town, in my novel Broken Time: the rugged hills, the streams and irrigation gates, and the little towns denting the roadside. The Farmhouse has its own stream, which passes under a bridge in front of the main house. 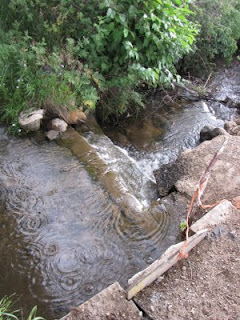 It also has a man-made pond out back, with at least two resident racoons – I surprised them this year when I trudged out with my camera and suddenly spotted them near a culvert. They disappeared into the pipe as quickly as they could. Unfortunately, I couldn't capture them on video. 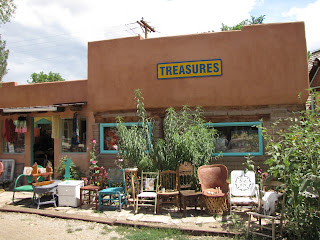 From the Inn, Mom and I venture out to surrounding attractions. We've got a couple of favorite shops we like to go to, but they're not the expensive galleries and clothing stores that took over Santa Fe and Taos. They're thrift shops, where the fancy stuff gets sold second hand. 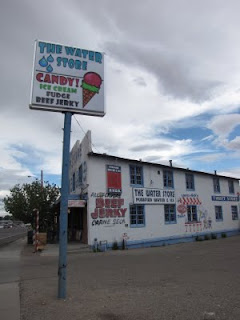 One of them is the second floor of a candy store in Española; items there run from 50 cents to $1.75. There are state and national parks to visit too.

If you drive along scenic route 14, you can see outcrops of tilted layers of welded tuff, superheated volcanic ash that fused into solid rock. Turn off the route into Cerrillos, and you can visit Cerrillos Hills State Park, which features several moderate hikes through a landscape of welded tuff & volcanic rock, scrubby trees & tough grasses. 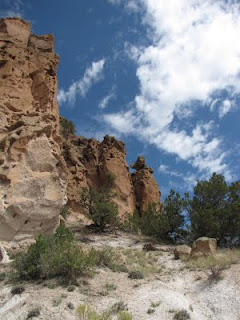 My favorite is Bandelier National Monument, below the Jemez volcano, which formed along the Rio Grande Rift. Jemez exploded twice within the last million years, spewing about 50 cubic miles of ash and rock. Bandelier National Monument is in Frijoles Canyon, which eroded out of thick layers of rhyolitic tuff, some of the same stuff you see along Route 14. The Canyon walls are tan, white, pink, and light orange, full of holes from gas trapped in the tuff that cooled and eroded into fanciful shapes. This fused ash formed a rock that ancestral Pueblo people found very useful for building material, so the monument contains ruins and petroglyphs too. This year, forest fires in New Mexico forced park officials to close all but a tiny portion of Bandelier. We didn't get to hike our favorite trail. But that just makes us more determined to come back next year.

Mom lived in Santa Fe when she was a little girl, some time during the early 1930s. It's changed so much since then, I think it breaks her heart a bit. Taos has changed too. Even I feel some of this sadness – when I was growing up in Arizona during the 60s, we only had about one quarter of the population we have now. Crappy apartment and housing complexes have sprung up everywhere, ticky-tacky places that are poorly built and crammed close together, and that all look alike. Beautiful hills and mountains have cities and towns creeping up their sides. This is not an improvement.

But we still manage to find the beauty in New Mexico every year. Mom will keep making her pilgrimage, and I'll keep tagging along. It's true that you can't go home again. 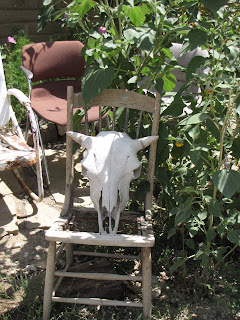 But you can certainly visit from time to time . . .

Posted by Emily Devenport at 5:36 PM