Heaven, Hell, And Other Devices 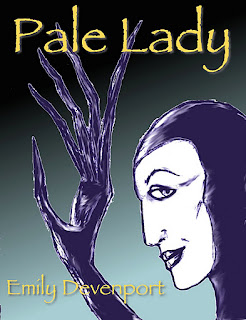 I've published a new ebook, titled Pale Lady, (cover art by Ernest Hogan) and this is the freebee coupon code for Smashwords: EG36Y. Just apply it when you're checking out, and it will reduce the price to $0.00.

Now that I've made the pitch, I have to make a confession. I can be very naïve when I decide what books and stories to write. Or maybe I should say I'm oblivious. I never consider how people may react, except to hope that they'll enjoy reading my work. In the case of Pale Lady, the novelette I just published on Smashwords and Amazon as an ebook, I didn't worry that people may assume the story is overtly religious until I was getting ready to publish it. Pretty funny when you consider that it's a story about a bunch of dead people whose souls have gone to Purgatory. Yep – I'm a pretty big dope.

I'm also an Agnostic. I have spiritual inclinations, but I don't want to belong to a church or a particular religion. I don't disagree with religious folk, and I don't disagree with atheists, either. I think they all make good points, but I'm happy to discover the mystery of the cosmos as I encounter it. Yet as a writer, I have to admit that Heaven and Hell make wonderful literary devices. Especially Hell. I have a feeling that the less you say about Heaven, the more accurate you're going to be. And God seems too complex a being to really capture as a character. The Devil, on the other hand, is a fairly down-to-earth kinda guy. And the ruined grandeur of Hell is irresistible. Dante's Inferno is much more readable than Purgatorio and Paradiso. Or at least, I think it is, because I only made it halfway through Purgatorio and couldn't finish it. The same is true of Milton's Paradise Lost. His description of Pandaemonium kicks butt, and I was fascinated when Adam asked an Archangel why the universe is so big if Mankind is the only intelligent race in it, and the angel told him that he just doesn't need to know the answer to that (apparently the mysteries of the cosmos are revealed on a Need To Know basis). I suppose I should read Paradise Regained some day, but should and will are two very different things. Besides, sequels hardly ever live up to the original.

I don't write about the Devil in Pale Lady. But I think he's a great character. Subtle he must needs be, who could seduce angels, writes Milton, in Paradise Lost. On the one hand, it's interesting to ponder the fallen Angel, Lucifer, a grand and beautiful super-being who felt confident enough to challenge the Almighty for supremacy (although I often wonder if he was just trying to show God that He was wrong rather than take over). High Fantasy writers use this sort of Devil to represent absolute evil, characters like Sauron from The Lord Of The Rings. Even in The Hobbit, the dragon Smaug has some of the Devil in his personality – Tolkien warns that talking to a dragon too long can get you into trouble.

I think it's the Devil's human qualities that end up intriguing us the most. He took that fall because of his hubris, and that's a flaw we all share to one degree or another. The characters in Pale Lady also get into trouble because of their flaws. But you can say that about any book.

So it's probably my setting that could cause the most misunderstanding. The concept of Purgatory is that you're seeking redemption – you blew it, but maybe you can fix it. Some might see that as an attempt to proselytise. But religious instruction is not my bag – if I'm going to preach, it's more likely to be about conservation. I wrote about these characters in Purgatory for only one reason: I dreamed they were there.

Dreams aren't the inspiration for every single novel or story I write, but most of the time they're at least a factor. In the case of the dream that inspired Pale Lady, I wasn't remotely aware that I was dreaming – the place I found myself and the problems I had were quite daunting. Once I woke up, I knew I had to write the story.

I find the concept of being perched between two extremes irresistible, maybe because I think it's the human condition. We're edging toward Heaven or Hell in our lives – not so much spiritually, but in terms of how we're managing things, how happy we make ourselves and others, what we do in the world and what we suffer. I often feel compelled to write about characters who are trying to escape difficult situations and find some measure of freedom and self empowerment. My personal experience is that escape from metaphorical Hell or Purgatory takes a certain measure of self sacrifice and courage. I suspect that if those metaphysical places actually exist, that rule could only be magnified.

So that's my shtick. I'm not pushing Jesus, Mohammed, Buddha, or any other prophet, and I'm not one myself. I'm just a writer who has odd dreams. I hope you'll find them entertaining.

One last thing – it was my intention to publish Pale Lady as a free ebook and to use it to promote my other books. But because of the way I published the Amazon version, I'm not allowed to offer it for free on Amazon. Since I have a contract with them not to offer the book at a lower price on any other site, I have to charge $.99 as the list price. That's why I'm publishing this freebee coupon. Please use it and pass it on to anyone else who may be interested. You'll only be helping me if you do so.

Plus you're more likely to go to Heaven. (Kidding.)

Posted by Emily Devenport at 8:05 AM

Email ThisBlogThis!Share to TwitterShare to FacebookShare to Pinterest
Labels: Dante, Milton, Pale Lady, Paradise Lost, The Hobbit, The Lord Of The Rings, Tolkien