Into The Great Semi-Known 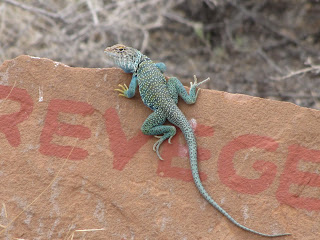 At mondoernesto, my husband, Ernie, wrote about our recent trip up North to Sunset Crater and Wupatki National Monument. This was one of those trips we needed to take to feed our souls. Money is tight right now, and these trips are much less frequent than they used to be. So we packed as much fun as we possibly could into one day, starting the trip at 6:00 a.m. and ending it at 8:00 p.m.

If I could, I would live on the road. Granted, I've never had to do that, and maybe you get sick of it pretty past. But in my opinion, you get a lot less sick of it if you can take your time (and if the money doesn't run out). After we got up in the wee hours and fed the hungry cannibals (both feline and canine), we got into our truck and hit the road. My heart was flying. 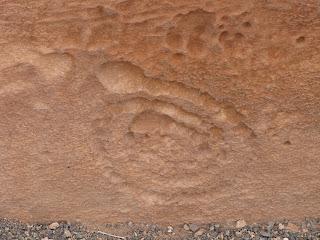 About an hour-and-a-half up I-17, off Exit 289, there's a turn-around that can take you in three different directions. If you go right, you'll get to Cliff Castle Casino. If you go straight forward(ish), you'll get to the cliff dwellings of Montezuma Castle. And if you go left, you'll end up at a combo gas station/fast food joint. I've come to love that odd little hybrid at the end of the left-hand turn. We always stop to get coffee there, get gas, and make a pit stop. It has come to symbolize the beginning of all journeys (or at least, the ones that go up I-17).

Montezuma Castle and Montezuma Well are both fascinating and beautiful destinations. A peacefulness pervades the scene in both places that leads visitors to assume an idyllic life for the people who actually lived there, which was probably true at least part of the time. Likewise, Walnut Canyon, which eroded out of the same top layers that compose the walls of the Grand Canyon, is also a happy destination. But we were bound for Sunset Crater and Wupatki, places where life could sometimes be less than idyllic. 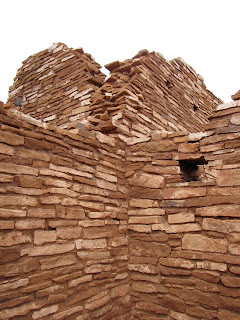 For one thing, around 1045 AD, a volcano went off. It was a small one, a cinder cone, but on the human scale that's plenty big enough. Sunset Crater is part of the San Francisco Volcanic field – the San Francisco Peaks are what's left of a composite/stratovolcano that blew itself up pretty much the way geologists would expect a stratovolcano to blow – out one side, like Mount Saint Helen's or Vesuvius. But the mix of magma in that general area is a little more complicated than that. The stratovolcano squirted out mostly intermediate volcanic rocks and pyroclastic flows, but Sunset Crater started as a rift eruption, and its magma was the low-silica kind you might expect to see on Hawaii, from one of its shield volcanoes. This low-silica magma had a high gas content, so it created a curtain of fire, blowing the runny lava high into the air, where it got whipped into cinders. 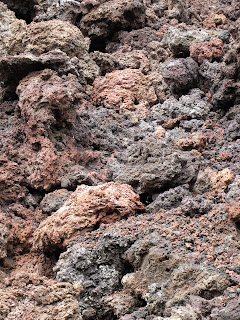 The eruption eventually became concentrated at one end and built a cinder cone. Near the end of the eruption, two types of mafic (low silica-high Fe & Mg) lava flows burst through the cone at the bottom: runny pahoehoe lava and chunky Aa. And for the grand (semi-)finalé, The volcano blew more gassy, mafic lava into the air, out of the top, and rained cinders down on the landscape. (Those darker cinders, higher in Fe & Mg, are called scoria.)

I say semi-finalé, because apparently hot magma continued to rise underground for a while, and this stuff melted enough of the surrounding rocks to be higher in silica. When it oozed through cracks in lava that was already cool, it acted kind of like toothpaste. You can see examples of this squeeze-y stuff in one of the cracks near the Lava Flow trail head. 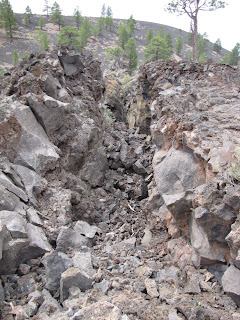 It's convenient to generalize about geological processes, partly to avoid confusing people and partly to paint a broader picture. But when you're actually confronted with the landforms in this part of Arizona, you have to admit there's a lot we don't know. The shallow subduction of the Farallon Plate near the end of the Mesozoic Era seems to have drawn volcanic activity farther inland than you would normally see it, which is why a stratovolcano ended up in Arizona. But something even more interesting may have happened. Arizona may have actually over-ridden the hot upwelling that was creating the rift in the first place.

If you look at the Atlantic Ridge System, you'll see it lies pretty much in the middle of that ocean. It's a classic opening basin. But the Pacific Ridge System in messier. The plates are moving apart at a faster rate, and most of the volcanic activity in the world is happening at the edges of those plates. Right in the middle of the Pacific Plate, a mantle plume is steadily blasting through, creating the Hawaiian island chain. Another plume created the Yellowstone Caldera. And if you look at New Mexico and Southern Colorado, you'll see that an ongoing continental rift has created the Rio Grande River Valley. The Colorado Plateau continues to rise. So geologists think we must be still moving over that hot, upwelling spot. Since peridotite and basalt have been found in Arizona and New Mexico, some of that hot stuff has to have come from the mantle. These are the nerdy thoughts that run through my mind as Ernie and I hike all over the Sunset Crater and Wupatki trails. In Wupatki, people used the little box canyons to divert water to their gardens. And though there's a lot of talk these days about how hot and dry it is there, 1000 years ago there was probably more ground water, simply because there weren't any gigantic communities nearby draining it. The cinders that lie on top of the soil keep rainwater from running off – they filter down into the aquifer, and emerge as springs. 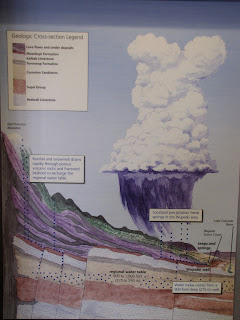 The stones used to build the dwellings were carved out of the Moenkopi formation, a wonderful mix of sandstone and shale that erodes into whimsical shapes. 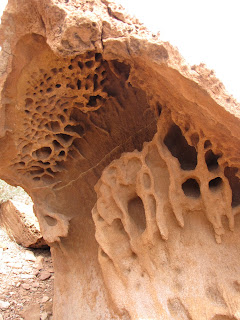 As Ernie and I hiked through the sites, I noticed that the sacred mountains could be seen from all directions.  Any argument about why people settled in the area must include those mountains.
The day was only half gone.  More adventures loomed on the horizon, like storm clouds . . . 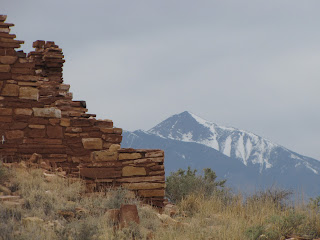