You're Using the Wrong Part of the Mesquite

When white people came to Arizona back in the 19th Century, they saw plants in the desert regions that seemed absolutely useless to them. The Indians who farmed and gathered in the riparian areas near the rivers tried to tell them otherwise. But white people know everything, and they figured they could just enlarge the ancient Hohokam canals and irrigate fields full of non-native crops. So they bull-dozed huge chunks of desert land and started farming. Being greedy cusses, they also appropriated river water that Indian farmers had been using, and now the Gila and Salt rivers are just dry, eroded beds in Central and Western Arizona.

In the years since, it has become apparent that there is a good reason why those Hohokam canals were abandoned. River water is full of salts that eventually saturate the soil it irrigates. Ground water, which is really fossil water that has been underground for thousands and even millions of years, has been drastically depleted in most parts of our country, thanks to persistent drought conditions. Our crops need tons of fertilizer to produce food, and more tons of insecticide to keep the bugs from eating them first. And the big agribusinesses are relying on narrower and narrower genetic strains for our food, engineered to resist the pests that feed on them, but even more reliant on fertilizer and water. 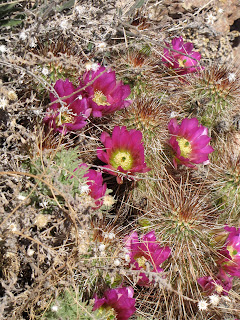 In the mean time, the humble desert still plugs on. It's seriously under siege by invasive species (including us), but parts of it still thrive. A few people eventually listened to the Indians, and now people in the Southwest are beginning to become aware that we have native plants that have been growing right here all along that are better food crops than the alien stuff we imported. In fact, one of those plants can be found in the barbecue section of any grocery store: the mesquite. But they're using the wrong part of that plant.

The mesquite was called the “Tree of Life” by Indians for good reason. It grows fast, requires little water, needs no fertilizer – and the bugs that attack it eat some of the seeds inside the pods that are produced every summer. And that's just fine, because the edible part is the pod.

Yes, those pods that people think are such a nuisance to rake up every year can be ground into a flour that is gluten free, higher in protein than most other flours (1g of protein per 2 TBS), low in carbs, and naturally sweet. They are gathered when they're dry, then ground into flour. The seeds are discarded. I had an Arizona Geography teacher who liked to mix the mesquite flour with buckwheat flour and make pancakes. There are many recipes online, as well as sources to purchase mesquite flour or even to get your own pods ground if you don't feel like doing it yourself.

Like the palo verde (which has an edible seed), the mesquite is from the pea and bean family, so people with a peanut allergy should avoid it. It's an excellent food source for the rest of us, along with prickly pear (the pads and fruit are edible), agave (edible hearts, like the artichoke), as well as tepary beans and other heirloom food seeds that are native to the southwest and our arid growing conditions. (Check out Native Seed Search for more information about them.)

Does that mean you shouldn't buy the mesquite wood for your barbecue? If you've got seed pods, you actually don't need the wood. You can put the pods in a foil pouch, make some holes for the smoke to escape, and set them on your barbecue coals. They'll give your BBQ the same mesquite flavor as the wood chips.

So you see, we've been using the wrong part of the mesquite all these years, and ignoring an important food crop.  Does that mean we shouldn't grow other, non-native crops?  I don't think so.  We just shouldn't grow them on such a large scale.  And we should be using southwestern heirloom seeds first, adapting our farms to fit our climate, instead of trying to force our climate to fit the crops.  Maybe we'll figure that out before it's too late.

Posted by Emily Devenport at 11:29 AM