Music for Writers (the SciFi and Fantasy Edition) 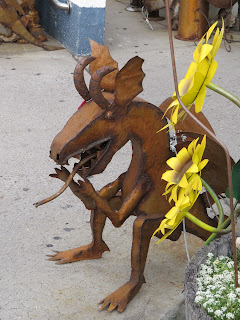 Lately people have been asking me to recommend music to listen to while writing. A lot of writers already have their favorites, but most people stick with what they already know. Classical music can be off-putting to people who don't hear it very often, because they think it all sounds like Bach and Mozart. I don't mean to cast a poor light on those composers, but they don't represent everything classical music has to offer. After all, most movie soundtracks can be described as classical in form (or jazz, which is a close cousin). So here's a sampler you can explore if you're feeling more adventurous.

Gustav Holst: Most people are familiar with The Planets, and it is, indeed, most excellent music for evoking fantastic images, but if you don't also listen to “The Perfect Fool”, “Egdon Heath”, and Beni Mora (especially the third movement, “In the Streets of Ouled Nails”), you're not getting everything you can out of Gustav Holst. Not by a long shot.

Ralph Vaughan Williams: I love The London Symphony from start to finish, but by far my favorite part is the 3rdmovement. It’s so rambunctious! You can say the same about The Wasps Suite, which was written to accompany a play; it has an optimistic, heroic tone. But, my goodness, Sinfonia Antartica! The symphony was adapted from the film score for Scott of the Antarctic. You can see that bleak, majestic landscape when you hear the music, but I feel more inclined to envision the landscapes of Mars.


Claude Debussy’s famous works are so well-known, I don’t see the point in listing them here, especially when I can recommend something far more magical – his Nocturnes.They conjure mystery, wonder, adventure; what more could a writer ask for? Well, perhaps joy, which is what you’ll hear in “Joyous Isle.”


Yolanda Kondonassis: While we’re on the subject of Debussy, Debussy’s Harp is simply gorgeous, especially Kondonassis’s interpretation of “The Engulfed Cathedral” and “Dances Sacred and Profane.” I would grieve for you if you never heard these, my imaginative friends.


Isao Tomita: Another beautiful interpretation of Debussy’s “The Engulfed Cathedral” is arranged for synthesizer for the album, Snowflakes are Dancing. Each song on the album is lovingly rendered for the Space Age, but it’s also suitable for those more inclined to Fantasy.


Mahavishnu’s album, Apocalypse, blends jazz and classical music. When I hear it (which is often, since it’s on my list of top ten albums), I always envision post-apocalyptic landscapes. “Vision is a Naked Sword” also provokes memories of intense thunderstorms in the Sonoran Desert.


Another of my favorite albums of all time is Gail Laughton's Harps of the Ancient Temples, inspired by the music of ancient cultures (including a couple that exist only in legend).  (Note: try the Laurel Website, for new copies.)


Chances are, you've heard the first movement of Rimsky Korsakov's Scheherazade, and that's about it. Most music samplers don't bother to move beyond that magnificent opening. However, if you saw Amazon's Prime series, The Romanoffs, you may recall the first episode, about the beautiful Paris apartment. The son (who hopes to eventually inherit that fabulous joint) turns on the radio and listens to gorgeous music. If you play Scheherazade all the way through, you'll get to hear that lovely piece, too. Once you have, treat yourself to The Golden Cockerel and Skazka (Fairy Tale), too.


Anatoly Liadov was not as prolific as some of his contemporaries – he liked to take his time. So we're fortunate he produced works like “Baba Yaga” and “Kikimora.” For those trying to envision something different from the European mythos that permeates the fantasy genre, try some Russian flavor from Liadov.


Jean Prodromidès was a composer of French film scores who isn't well-known in the U.S., but if you were one of the lucky kids who saw La Voyage en Ballon when it premiered over here in the 60s, you got to hear one of the best scores ever composed. This music is adventure, distilled. We have Jack Lemmon to thank for that – he bought the American rights. The best version of the movie is the one that has no narration, just action and music.


I'm probably not telling you anything you don't already know, but Bernard Herrmann's The Day the Earth Stood Still is the essential SciFi soundtrack, and Jason and the Argonauts is the essential Fantasy.


I searched for Georges Auric's La Belle et la Bête for 40 years before someone finally released it on CD, and that's when I discovered that the score had been lost among his personal papers that whole time. Someone found it when they were sorting through, after his death. As beautiful as Cocteau's images are in that movie, Auric's score is half the experience (at least!).


Igor Stravinksy's Rite of Spring was adapted for Disney's film Fantasia by Leopold Stokowski. Many have grumbled about his version, by I think it captures the essence of the piece. You can't hear that music without seeing the dinosaurs. However, if you want to see dragons, go with the original.


When you were a kid, you heard Sergei Prokofiev's Peter and the Wolf. Now that you're a grown-up – possibly writing a novel with characters in the military? – try the Lieutenant Kije Suite.


Sergei Rachmaninoff would be insulted if we included the work of his countrymen and not his majestically macabre masterpiece, “Isle of the Dead.”

Ottorino Respighi is one of my top ten favorite composers, and the album I've linked to for Pines of Rome is one of the greatest recordings ever made.  This music is a link to ancient Rome, and the wider world beyond it.  However, for pure ecstasy try "The Birth of Venus" from Three Botticelli Pictures.

Posted by Emily Devenport at 8:15 AM

Email ThisBlogThis!Share to TwitterShare to FacebookShare to Pinterest
Labels: music for writers