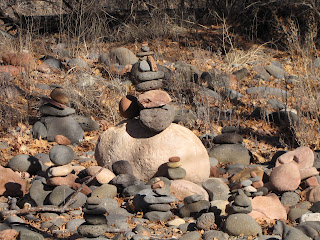 I'm sending this plea to everyone, but especially to my fellow Arizonans (because we're probably the only ones who can get out of our houses this time of year). My husband and I just got back from our second honeymoon, a wonderful roadtrip to The Petrified Forest, Meteor Crater, Walnut Canyon, the lava fields of Sunset Crater, the South Rim of the Grand Canyon, Oak Creek Canyon, and Red Rock State Park. And now I have a soap box to climb, I need to shout this and I need you to pass it on.
Visit your state parks! Buy a year pass and use it! And if you have a year pass (or even if you don't), put some dollars into the donation box in the visitor's center! 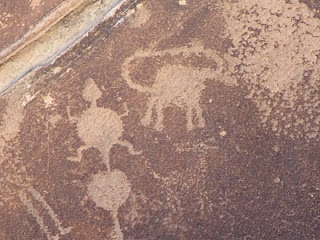 Many of the state parks in Arizona are about to close because of our crummy economy. Once they do that, it could take a while to get them up and running again. I'm afraid some of them may be sold off to hungry developers, who will turn around and build their Schmuck Manors on them. This is so unnecessary, because it wouldn't take that much moolah from each of us to keep them going. The year pass currently costs $50 ($80 for the National Parks -- buy one of those, too). In March it's going up to $75, still a bargain. You'll spend that much on a night out with your family, and you get way more bang for your bucks at the State Parks, because you can visit them over and over, all year long. 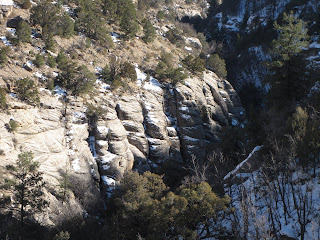 I've lived in Arizona 46 years, and I'm sorry to say that until recently I haven't spent much time at the State or National Parks. This January we visited many places I've been meaning to visit for years, and some I'd never heard of. My two favorites were Walnut Canyon National Park (if the Grand Canyon is too big for you, visit this wonderful little gem) and Red Rock State Park. Red Rock is on Hwy 89, up the road from Slide Rock State Park (one of the few that's earning money), it's on the desert side of Sedona. Turkey Creek and Oak Creek pass through it, plus it has dozens of seasonal creeks and washes. There are several hiking paths that radiate from the visitor's center. These paths are easy to moderate in terms of physical challenge, and the scenery is gorgeous. Like Sedona and Oak Creek Canyon, Red Rock is magical. If you have a spiritual bone in your body, you will pause often to contemplate and commune.
They conduct regular Nature Encounter Walks from the visitor's center too, you can walk with a ranger and learn to see all the stuff you didn't notice on your own. You can take a picnic lunch, make a day of it. 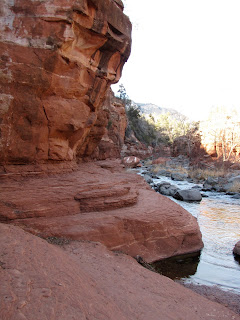 Most people don't think of visiting State Parks in the Winter, but in Arizona it's a great time to go. You don't face the crowds of summer, the temperatures are between 45 degrees F and 70 degrees F. You get to see more wildlife, too. At Slide Rock State Park, Ernie and I were able to walk along the creek much farther, because the water was lower. We encountered only about 20 people on the way (as apposed to the summer mob), and often we were alone for several minutes at a time. Take cash with you this time of year, because the booths at the entrance to the parks often aren't occupied in the off-season months, and they depend on the honor system of payment. Envelopes are provided for cash payments (usually $7 to $10 per car). If you've got a year pass, you can tuck a small donation into the envelope, instead. 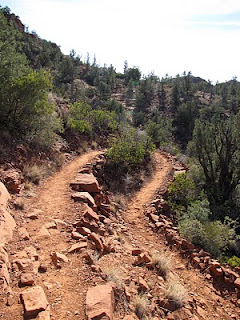 Those of you who live in or around Phoenix, you can start by taking Hwy 60 to the Boyce Thompson Arboretum. You'll drive past the Superstition Mountains, one of my favorite hiking spots. Hwy 60 passes some amazingly beautiful territory.
I spent the first half of my life being too busy to see what was under my nose. Don't make my mistake. Get our there and visit! Save our State Parks! I'm counting on you!
Posted by Emily Devenport at 8:58 AM