Geology Lessons From A Miner 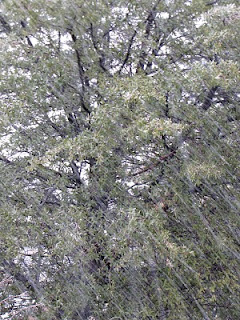 Enlightenment is a humbling experience.

Yeah, I know -- it’s not the biggest problem you can have in your life. But I want to be a geologist, not just a hobbyist, not a rockhound (no insult to rockhounds intended). Liking rocks and pondering what they are and how they got there is just the beginning of the process. Sooner or later you’ve got to commit, and then it gets hairy. You find yourself eyeball to eyeball with a roadcut that defies easy classification, and you feel like a total dope.

Highway 90 winds through Tombstone Canyon, past the Queen Mine in Bisbee, down through layers of grey limestone, red hematite, yellow limonite. If you go into one of the antique shops at street level and it features a bargain basement, you can see rooms carved out of natural cement. Now that I’ve been there, and I’ve taken the tour, and I’ve read the wall plaques in the mining museum, I have a good idea what the various minerals and rock forms were in Bisbee.

But as we drove in for the first time, I felt flummoxed. I had only seen light-colored limestone, and I didn’t have any acid with me (I shall remedy that, next time). I also had geology exams to study for, so my textbooks were the first things I unpacked. I had to keep reminding myself -- this is a VACATION. Have FUN !

Fortunately, curiosity rescued my mood. That and the well-stocked coffee station downstairs at the B & B where we stayed (aptly named THE SCHOOLHOUSE). If you’re planning a trip to Bisbee, I highly recommend this place. And a restaurant called SANTIAGO’S. And another eatery (for lunch) called CAFE CORNUCOPIA. And the Queen Mine tour, which (at the very least) will give you some idea what a miner’s job is like. 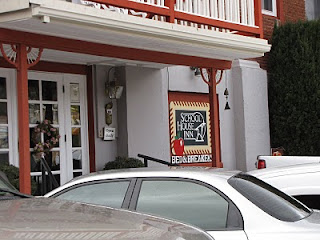 I found out (by cheating and reading info on the walls of the mining museum) that the geology of Bisbee was shaped by repeated marine transgressions that laid down layers of limestone, followed by volcanic activity that sent lava and superheated gasses into cracks and faults in the sedimentary layers. It was in these faults that the useful ores collected. As we progressed (mostly vertically) into the mine, I gazed at the walls of the tunnel and wondered if I was looking at rhyolite or limestone (probably I saw both).

My epiphany came when somebody asked the miner who was guiding the tour an innocent (yet foolish) question. This fellow worked in the mine for 21 years, and had become an expert in setting explosive charges. He had taken us into a large chamber that had been thoroughly mined of its useful ores. A fellow asked him, “Did you have a geologist to show you what ores to look for?”

The miner didn’t laugh. He said, “No sir. See that red material up there? That’s hematite. That’s the iron ore. That green material? that’s malachite, copper ore. That grey stuff halfway up that wall? That’s lead ore. And that vein over there is silver ore. I didn’t need a geologist to tell me that, it was my job.”

He never worried whether he could identify the rocks. He learned to recognize what he was looking for. And so will I.

It was raining when we came out of the mine. The rain rapidly turned to snow. I was oblivious to the discomfort, I felt way educated. That miner didn’t like his job, he did it because he needed to make a living. All he had to prove was that he could do his work well. I can do mine, too (especially if I have acid).

The next day we left Bisbee, land of winding, narrow, windy streets (I got rocks blown up my nose at one point), and drove to the Whetstone Mountains, home of the glorious Kartchner Caverns (where I saw a sample of limestone that was mostly black -- I’m SO confused). Ernie’s blog about that stop is way better than mine, so I linked it. I’m back home now, took those tests, and I’m getting ready to take two more. Gotta do the school thing before I can get out into the field with my bottle of weak acid. But I’ll get there. And I think I'll like my job just fine. Mysteries beckon, and my curiosity is stronger than ever.

Posted by Emily Devenport at 4:00 PM