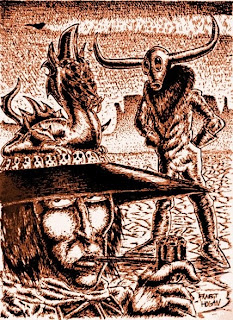 Reality TV shows usually leave me cold, but one show has captured my attention: Chasing Mummies, with Egyptologist Dr. Zahi Hawass. Dr. Hawass is a leading authority on Egyptology – that would be enough to get me to watch his show. But he also reminds me of my Uncle George, who was an Egyptian Greek. I get a serious bang out of watching him run his graduate students all over the Egyptian landscape.

But it's not all fun and games. The graduate students often provoke some well-deserved wrath. I can understand that the students seem extremely ill-prepared for the demands of field work. Even if you've worked sites in the U.S. And Central/South America, Egypt is a challenge unto itself. These students are lucky to have Dr. Hawass to guide them through this extraordinary experience. What actually surprised me the most was when one student, after crawling into the heart of the Great Pyramid at Giza, expressed the theory that the pyramid was built by ancient astronauts. Dr. Hawass was thunderstruck – but only for a second. Then the Wrath of Hawass descended upon this benighted young student. “That is stupid,” Hawass replied, and went on to thoroughly and succinctly refute the Ancient Astronauts hypothesis.

I could only shake my head when I thought about this privileged young student, who must have earned excellent grades in order to qualify for the program that delivered him to Egypt, just so he could voice his lame-brained hypothesis to one of the foremost authorities in Egyptology. Yowza. What was this guy thinking? How could he call himself an archaeologist?

But my own knowledge of the subject was lacking when I posed that question. I've since learned a bit about another wacky hypothesis that used to be all the rage in the Americas: that the mounds found all over the Eastern U.S. could not possibly have been built by Native Americans. Some lost super-race must have built them, after which they either moved on or were murdered by the Native Americans currently living in the area. Educated, intelligent people formulated this hypothesis. By expressing his belief in Ancient Astronauts to Dr. Hawass, the young graduate student was continuing a tradition of confabulation and disrespect that has always haunted the field of archaeology.

Math and the hard sciences can be proven with mathematical formulae and experimentation, both in the lab and in the field. But archaeology is one of those fields that has to combine the scientific method with a certain amount of imagination and inspiration. The evidence left for archaeologists to examine has often been tampered with and plundered by yahoos, idiots, and charlatans – they have to work very hard to preserve the integrity of sites. These are smart and dedicated people, and they try to err on the side of caution.

But intelligence has a negative side: arrogance. Smart people often underestimate other people. When early archaeologists began to survey the mounds and study their grave goods, they had little or no respect for the Native Americans who lived in the area. They reversed the scientific process and came up with a “theory,” then looked for evidence that would support it. When they found evidence to refute that poorly tested and unproven “theory,” they explained it away or stuffed it out of sight into drawers. Eventually, skull measurements confirmed that Native Americans living in the area were descended from the Mound Builders. Grave goods and excavated sites presented evidence that the pattern of agriculture, economy, and technology changed in the area, shifting the people into a different pattern of living.

The premise behind the Ancient Astronauts hypothesis is even dopier than the confabulations surrounding the Mound Builders. It is simply that ancient men weren't smart enough to engineer and build the pyramids. I would have thought this silly notion no longer held any power over students interested in archaeology. I'm sorry to learn that it does.

Posted by Emily Devenport at 9:49 AM

Email ThisBlogThis!Share to TwitterShare to FacebookShare to Pinterest
Labels: archaeology