Confessions Of A Fan Dancer Wannabe 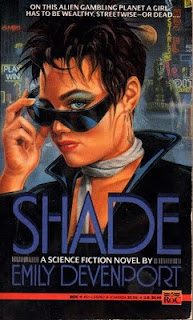 About 25 years ago, I was on a trip to New Mexico with my mother and my sister. We were staying at a Bed & Breakfast in Santa Fe, and one morning we sat down to breakfast with a couple of very nice ladies from North Carolina. Conversation started with what we were doing for the day, how beautiful New Mexico was, etc. But eventually, the subject at hand became what we did (or if you want to look at it another way, what we were).

My mother had a past she could be proud of – 25 years teaching Special Education, then subbing for the 3rd grade. (Now she teaches English As A Second Language for adults). My sister volunteered that she was a college student, working on her Bachelor's degree in Geology. (Now she teaches 3rd grade in California and lives in an Ashram – she spends several months a year living and volunteering in India). The whole time they were talking, my frantic little brain was scurrying around, trying to scare up something I could say that would not sound totally lame, disreputable, and/or pathetic.

I pretty much failed, because I am the Black Sheep of the family. I had already gone to junior college twice, trying to settle on something I wanted to do, but I didn't even have an Associates degree. I had no steady source of income, had worked a variety of low-paying jobs. The only thing I had going for me was the fact that I was a writer – but I wasn't published yet. In fact, I was on the brink of my first sale: a story titled “Shade And The Elephant Man” (which I later developed into my first novel, Shade). Charlie Ryan at ABORIGINAL SF had asked me for a re-write, and was looking at the result (I hoped) even as we spoke. What was I going to say to these ladies? I'm kinda-sorta on the verge of maybe selling a story . . .

My sister stopped talking, and one of the nice ladies from North Carolina turned to me. “Well then,” she said, seeing my extreme hesitancy, “you must be the fan dancer.”

Ha! I wish! The life of a fan dancer sounded exotic and glamorous. Fan dancers actually have dancing skills, you can imagine them waving their feathered half-shells in the courts of ancient kings. Or you might picture Gypsy Rose Lee, dropping her shoulder strap as she sings, “Let Me Entertain You.” You wouldn't picture the hard life of a nude dancer in today's men's clubs – a life that, frankly, seems more like the life I was really living at that time (metaphorically, at least). To be a fan dancer – how much better that sounded than the truth.

But I was on the spot. So I did what any self-respecting writer would do. I lied. “I'm a writer,” I said. “I just sold my first short story.”

My mom, god bless her, chimed in with her very high opinion of me, and the fact that what I wrote was science fiction (as if this were ultra-glamorous). The ladies were pleased, and it turned out that they liked science fiction too. Of course, they were Southern ladies, and this may have been a polite fib. But I can hardly point an accusing finger at them when I was the biggest liar at the table.

A week later, I returned home to discover that Charlie Ryan wanted to buy the story, and my lie turned into the truth. He bought two others after that. I sold a few more stories, and eventually I sold nine novels to NAL/Roc. I was also published in the U.K., Italy, and Israel. I just self-published two new novels as e-books, and I plan to do the same with my entire backlist. Nowadays, I'd have something good to tell those ladies. I'm even back in college, studying Geology (my sister had the right idea).

And I probably wouldn't have made a very good fan dancer anyway. Still, it might be nice to wave those feathers around, once in a while. Just for fun . . .

Posted by Emily Devenport at 2:15 PM