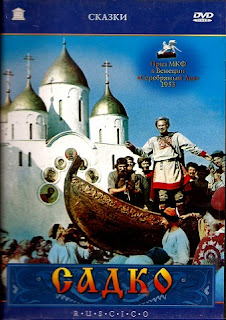 When you turn on the TV in the wee hours of the morning, you're never quite sure what you're going to get. Sometimes it's a shopping program, or an extended infomercial. Sometimes it's an extra-early version of an early news show. And sometimes you discover something magical.

That's how I stumbled on Sadko, directed by the Russian master of fairy tale films, Aleksandr Ptushko. Several years ago, my husband and I were working a difficult shift at Borders, and had to get up at GodAwful O'Clock in the morning (it was 3:00 or 4:00 a.m. – not my favorite time of the day). We had cable TV, and turned it on to watch the news. But we didn't have it tuned to the right station, and instead we ended up in the middle of a movie.

We were not in a movie-watching mood. But Sadko was so charming, we left it there and watched Sadko and his men going up to the sultan's tower where the Bird of Happiness was allegedly being kept. And this was when an amazing moment occurred. The Bird had the head of a woman, she was sitting on a perch in semi-darkness. She moved slightly, so the light fell across her face, and it was the most beautiful face I've ever seen. That image struck me right between the eyes (an interesting experience to have that early in the morning), and it has haunted me (in a good way) ever since. The bird lady was a wonderful special effect, I completely believed her.
Years later, on a whim, I looked the title up on amazon and was delighted to find it available. I've watched the DVD several times now, and it never loses its magic.

Granted, it's been ridiculed on Mystery Science Theater 2000. Not everyone who looks at Sadko will see its charm. To American eyes, it may look pretty corny. The dubbed version is BADLY dubbed, and many people don't like having to read subtitles. There's no CGI (since the movie was made many decades ago in Soviet Russia), and the leading lady is a little plump by modern standards.

But her face is truly lovely, and her voice is even more beautiful. I love hearing the actors speak Russian, and the sets and mattes for the film remind me of the work of the Russian artist Nikolai Roersch.

Sadko is based on the Russian folktale, and was also the subject of a symphonic poem by Nikolai Rimsky-Korsakov. The movie is really a glimpse into two lost worlds: the world of fairy tales, and the world of film makers who have more creativity and ingenuity than money. It never forgets that it's a folk tale, never loses touch with the roots of the audience for whom it was made. In one scene, Sadko hires a crew for his ships based on how much vodka they can drink without falling over and whether or not they can withstand a punch in the chest. Also, being able to wrestle a bear is a plus. You'll be happy to know that no actual bears were harmed in the filming of that segment – a guy in a bear suit takes all the abuse.

When the movie was packaged for American audiences, they called him Sinbad, but Sadko is a way nicer guy. He is a musician who plays the gusli, but unfortunately also has political opinions. When he sees the suffering of the poor, he wants to do something about it. He doesn't totally succeed, but he gives it the ol' college try. He tries to find the Bird Of Happiness so he can take her home to Novgorod. What he finds is a far stranger, more dangerous creature, possibly a siren. She lulls people to sleep with her beautiful voice, so the bad guys can come and kill them. She belongs to the sultan, so I imagine she's fallen on hard times and is forced to work for her keep. She must spend her days sitting on her perch, in the darkness, contemplating the lost Golden Age. Sadko almost falls under her spell, but rouses himself at the last moment. He realizes he's been chasing a rainbow, so he decides to chase it home again.

His adventures aren't quite over. He still has to play his gusli for the Tsar and Tsarina of the Underwater Kingdom. When the undersea revelers make waves that threaten ships on the surface, Sadko breaks his gusli and escapes to find his true love in Novgorod.

In fairy tales, courage and love win the day. Sometimes a movie can capture that same magic. That's why I love Sadko, unreservedly.

Posted by Emily Devenport at 8:00 AM