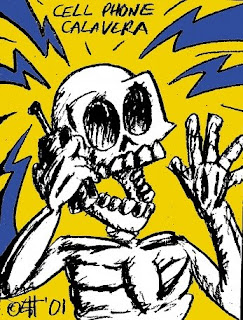 Let's face it – latchkey kids are the perfect target for a haunting. We're all alone. We're hungry (and sick of cheese sandwiches). And we've seen all the monster movies - we know that evil forces are out there, just waiting to gobble us up.

But what are you going to do? Mom and Dad are working to keep a roof over our heads, and we're too old for babysitters. So we walk home from school, let ourselves into our scary, empty houses, check in the closets and under the bed (baseball bat in hand) and settle down in front of the TV and/or game thingee with a crummy cheese sandwich. We find some diversion to keep us from freaking out until more people come home and turn the empty house back into a haven.

If you were a ghost, wouldn't YOU pick on that kid? Plus, you would have the advantage of surprise. In an ordinary neighborhood, who's expecting a ghost? We don't have a lot of abandoned mansions nearby. We're kind of expecting to get attacked by monsters of another kind.

I think my neighborhood was typical in a lot of ways. It was suburban, and we had a resident monster. She was called Mano Loco, and I suspect she was a spin-off of La Llorona, the vengeful spirit of a woman who killed children. Being a kid myself, I took that very personally. But sightings of Mano Loco were rare – the monsters we were most likely to encounter were human. And as a kid gets older, our expectations change. When you're 5, you think Frankenstein is going to get you. When you're 10 or 11, you're more likely to expect the crazy guy with the knife. 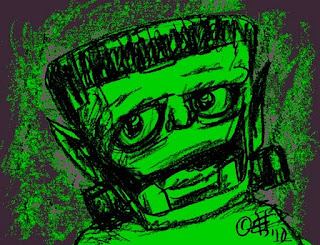 I think I almost encountered that guy once, or his close cousin. I got home from school one day with a really big problem – I had to go to the bathroom so bad, I almost didn't get the front door unlocked in time. I rushed into the house without even closing the door – the only smart thing I did was to lock the bathroom door.

As I sat there taking care of my business, my mind started nagging at me. You didn't close the front door, it warned. Bad idea.

Still concerned with more pressing matters, I brushed that off. No one's going to break in, I said with 99% confidence. It's not like crazy guys are waiting behind the bushes outside the house 24/7 . . .

Maybe they aren't. But I heard a sound in the hall, and then I saw shadow feet in the gap under the door. I ran to the door (I can't remember if I tripped over my shorts or not) and grabbed the doorknob just as it began to turn.

You may remember, I said I had locked the door. So why was the bad guy on the other side able to turn it? Because this oddball doorknob was designed with a hole in the center – if you inserted something into the hole, you could press on the mechanism and turn the knob, opening the door. This is an important point for two reasons: 1., if you couldn't turn the knob, you couldn't unlock the door, and 2. You actually had to have a knob like that to know how to get it open. Which means that the person on the other side of the door, attempting to ambush me in the bathroom, was probably one of my neighbors. I was only 10 or 11 at that time, but I grasped that little detail immediately, and to say that it freaked me out is a serious understatement. 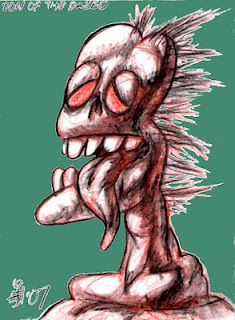 I held onto that knob for dear life. The person on the other end kept trying to turn it. Fortunately, this was not comparable to arm wrestling – my desperate strength was just enough to keep the knob from turning. I'm not sure how long this contest of wills went on, because I think I was suffering from time dilation by that point. I just hung on until the galaxy stopped spinning and time itself came to an end.

Then I peeked under the door. No one stood there anymore. It took me a while to work up the courage to come out. When I did, I fled and stayed at a neighbor's house until my mom came home. 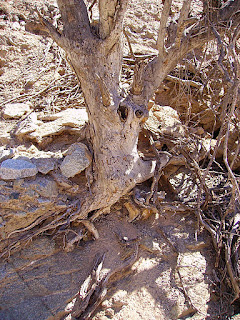 I never did figure out which neighbor tried to ambush me. And from that point on, I felt more than a little paranoid about being home alone. I think that may have been what attracted the poltergeist.

Poltergeists are “mischievous ghosts.” They like to move stuff around, to occasionally throw things, and to make loud noises. I had a friend who was trying to clean up her mother-in-law's house – the woman had been a pathological pack rat whose home was stuffed to the rafters. My friend had a lot of trouble making progress. She would sort books into separate piles, leave the room for a moment, then come back to find the books had been re-shuffled into one giant, precarious stack in the middle of the room. That's pretty typical behavior for a poltergeist.

My ghost only had one trick up its ectoplasmic sleeve. It demonstrated that trick to me one day after I came home from school. I was standing in the family room, setting my books on the table, when I was overcome by the certainty that someone was in the house with me. I turned, listening as hard as I could. Then something began to come down the hall toward me, stomping its foot and snapping its fingers as it came. 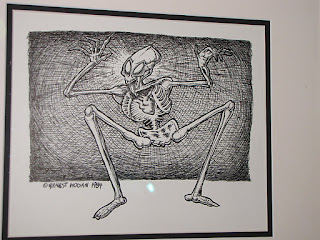 Let me clarify something. The noise I heard was not the sound a human foot and human fingers would make. It was grotesquely amplified, as if freakin' Godzilla were stomping his way down that hall, headed straight for me. And the snap was like the sound high voltage wires would make as the giant, mutated Komodo dragon walked straight through them. It went like this: THUMP! SNAP! THUMP! SNAP!

That line of THUMP-SNAPS would be a lot longer if I had actually hung out to listen to them. Instead, I ran out the front door as if my tail were on fire. I ran to my friend's house. And if this were a movie, this would be the part where I told my friend what happened, and she didn't believe me. That's what happened in real life too. So of course, I had to take her back to my house and show her. 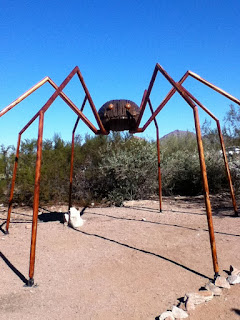 No, really. We were that dumb. You would have been shouting, “Don't go back into that house, don't go up those stairs, don't go into that basement!” I didn't actually have a basement or any stairs, but if I had, I'm sure we would have climbed and/or descended to our doom. We went back into the house. We stood in the family room. We waited for a long time. Nothing happened.

She smirked at me and said, “See?”

And then something in the hall went, “THUMP! SNAP! THUMP! SNAP!” moving right toward us.

I think she may actually have gone airborne at that point. She zoomed out my front door with me right on her tail. But I admit, even in the midst of all that terror, some little part of me was saying, I told you so, with a ridiculous amount of satisfaction. 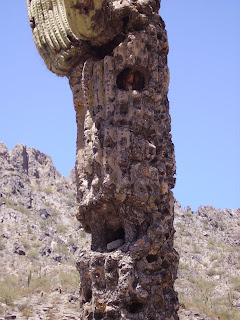 So for months afterward, I tried to avoid being home alone. But the THUMPSNAPPER still managed to ambush me a few more times. Each time it happened, I zoomed out the front door before I could get a good look at the supernatural prankster. And each time it happened, I had no trouble getting away. But then something unavoidable happened. I got sick. 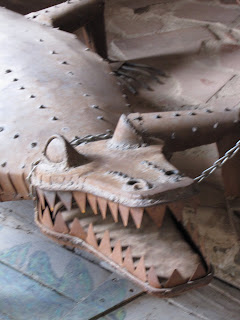 I had to stay home in bed. And I was so sick, for a few days I didn't even think about the THUMPSNAPPER. I just sort of faded in and out of consciousnesses, halfway listening to the TV set on in the background.

Finally I got to the point where I was feeling better. I was wide awake in the back bedroom, watching some game show. And suddenly I heard the THUMPSNAPPER coming.

But this time, it started at the other end of the hall, between me and the front door. I couldn't get out. I looked at the window, and for one moment I contemplated trying to climb out.

Instead of doing that, I hid behind the door. And I didn't cower there. I waited, because I wanted to finally confront this thing that kept terrorizing me, that kept chasing me out of my own house. I had had enough. I was ready for a showdown. 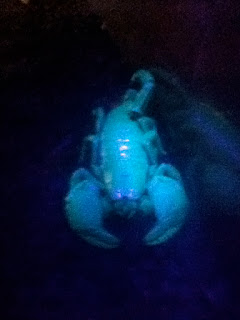 Well – almost ready. I hid there as the noise came closer, my heart pounding. It reached the end of the hall and stopped there. It was on the other side of the door. I could actually feel a presence. And finally, I screwed up my courage enough to look.

Nothing was there. The THUMPSNAPPER had simply evaporated. That's when I knew that my poltergeist was nothing more than a loud noise. It could startle me, it could annoy me, but it couldn't hurt me. Its reign of terror was over. I never heard it again.

Years later, I was reading a book about ghosts and saw the word poltergeist. I had never heard it before, and I didn't know the word back when I was actually being haunted by one. I read something interesting about those noisy ghosts. The noises they make often sound unnaturally amplified. That's when I realized what had actually haunted me, years earlier. The THUMPSNAPPER was a textbook case, though it never threw anything at me. It was more playful than mean.

So if your kid tells you about something that scared them, something they never saw but that made REALLY loud noises, believe them. Tell them what a poltergeist is. Maybe they can confront it and make it go away. Or it may get bored and go away by itself.

Or it may just hang around indefinitely, waiting for the right moment to go . . . 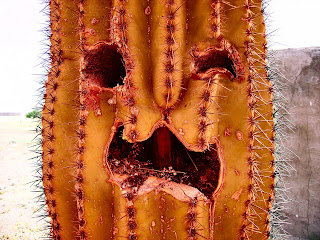 Posted by Emily Devenport at 8:00 AM