Anyone who worked in a music store back in the Days of Yore (when we could actually play what we wanted instead of suffering through the programmed stuff) will tell you that one of the great pleasures of that job was introducing customers to great albums they would not have otherwise known. When I worked in the music department at Borders, many years ago, HMS Donovan was one of the albums I loved to promote.

Most people only knew the Donovan who sang “Mellow Yellow,” a delightful song, but hardly the full range of Donovan's repertoire. And very few people may recall his cameo appearance in the movie, If It's Tuesday, This Must Be Belgium, in which he sings “Lord Of The Reedy River.” That this incredibly romantic song is included on HMS Donovan is a testament to the emotional range represented by the album. It was produced as a present to his young daughter. But, though it contains children's songs and poems, there is nothing tame about them. You have only to listen closely to the song of “The Walrus and the Carpenter” (from Alice In Wonderland) to know that. 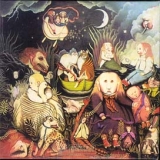 A tantalizing rumor that has persisted for many decades is that at least Paul McCartney and possibly also John Lennon did backup vocals (as the doomed Oysters) for “The Walrus and the Carpenter.” This is hard to confirm, because the vocals were altered, probably mechanically or (my own whimsical theory) possibly by having the performers inhale helium. This theoretical collaboration is hard to dismiss, considering that a version of “The Walrus and the Carpenter” is on a Beatles bootleg album. Donovan isn't credited for singing on that bootleg, but he did work with the Beatles from time to time. McCartney did backup vocals for Donovan's song, “Atlantis.” And Donovan helped McCartney finish writing the song, “Yellow Submarine” by coming up with the lyrics, “. . . Sky of blue, and sea of green, in our yellow submarine . . . “ When the Beatles traveled to India to visit the Maharishi, Donovan went along.

Another interesting thing about the album is the artist who did the cover and the interior art (in the earlier printing, a bonus poster was included) – a fellow who simply called himself Patrick. Patrick also did the art that was supposed to appear on the Beatles album that eventually became the White album. Needless to say, this did not happen, and the art was eventually used for The Beatles Ballads and the EMI Dutch release of a love songs album, De Mooiste Songs.


My brother, David, researched Patrick some more and discovered that he is the Scottish artist and playwright, John Patrick Byrne. He is well known in Scotland and has published a children's book, Donald And Benoit. Mr. Byrne doesn't seem to play up his connection with the Beatles, so a fan set up a website for him. To quote from the bottom of the home page: "This is a website dedicated to the paintings of the Scottish artist John Byrne, the true renaissance man from Paisley. I thought about calling it 'ohforgodssakewhycan'tIfindJohnByrnes paintingsonthenet.com,' but, sadly, the domain name was already taken."


One last bit of trivia about Mr. Byrne -- his significant other is Tilda Swinton.


As for the other album whose cover Mr. Byrne painted, YouTube lists many of the songs on HMS Donovan. Unfortunately, the one for “The Walrus and the Carpenter” seems to have been recorded with a hand-held microphone off of someone's turntable, using a scratched LP. This version of “Jabberwocky” is much better.

And one of my all-time favorites, “Henry Martin,” is also well represented.

There are 28 songs on the album, and most of them can be sampled on YouTube. Once you've heard them, you may decide to download the songs from itunes. If so, it's an investment you won't regret.
Posted by Emily Devenport at 3:06 PM