Rear Window: The Most Perfect Movie Ever Made Making a list of the top ten of anything seems futile. Lists like that are subjective – what I like may make others go, “Meh.” Also, what makes this week's list may not make next week's. Plus it's probably not reasonable to limit lists to ten choices – Top Ten is an advertising gimmick that we've all bought into a little too readily.

Having said that, I have to admit that there is one good reason to make a list of your top ten favorites of something, and that's to give exposure to things you like, promoting them to people who may enjoy them. That's why I've decided to list my top ten favorite movies. My real list of favorites is way too long, but I'll pick the ten that occur to me as I write this. They're in no particular order – but there is one movie that I consider to be the most perfect movie ever made, so I'll put it at the top of the list. It's Alfred Hitchcock's version of Rear Window.

A perfect movie has to take the best possible advantage of its medium, which is primarily visual. It has a finite amount of time to tell its story, so each frame has to count – there can be no unnecessary scenes or shots. It has to have an excellent cast. And the story has to be good enough to make you keep your eyes on the screen the whole time, wondering what's going to happen next. If it isn't a silent film, the score has to complement the visuals rather than detracting from them. If you can do all that, you've made a perfect movie.

If you watch Hitchcock's Rear Window, you may be deceived into thinking that not much thought went into it. It's so seamless, you can't see how clever it is. There are two sets, and they blend into each other. The whole shebang – Jeff's apartment, the courtyard, and the other apartments the main characters can see into – was filmed on a big soundstage. The sounds and music in the movie are ambient, what you would naturally hear if you lived in one of those apartments. This enhances the reality of the setting, and puts the characters and story in the forefront. We're really there with 'Jeff' Jeffries, a world-traveling photographer who's laid up with a broken leg and going stir crazy. That's why we're able to see, almost from the beginning, that things are not what they seem.

The screenplay is based on Cornell Woolrich's short story, “It Had To Be Murder.” Woolrich was one of the best American short story writers of the 20th Century, a master of suspense. John Michael Hayes' adaptation is perfect, and I suspect it was shaped as much by the cast as it was by the necessities of the movie medium. Grace Kelly owns the role of Lisa – I think it's her best role ever. She's so believable, you know she lives beyond the story, having adventures well into her 90s.

Jimmy Stewart made several great movies with Alfred Hitchcock, including Vertigo, an almost-perfect movie. Vertigo is marred by an info-dump scene in which Kim Novak's character writes a letter explaining a plot point. The studio insisted this was necessary, because the executives who saw the first screening were too dumb to figure out what was going on. If Hitchcock could have lived long enough to see the “Director's Cut” videos that have since become the norm, I'm sure he would have insisted on releasing a version without that dopey letter scene in it. 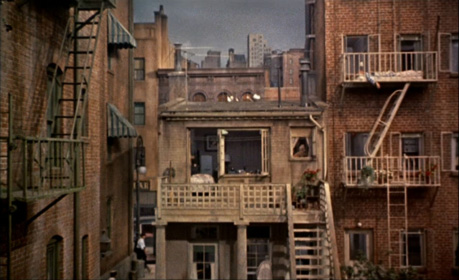 Fortunately, Rear Window made it to the final cut without that sort of tampering. Complementing Kelly and Stewart is a cast of veteran character actors. Thelma Ritter shines as the visiting nurse, Wendell Corey makes you believe he's a police detective who also fought in WWII. The actors who play the neighbors whose antics are so fascinating really seem to be living the lives of those people. And Raymond Burr is one of the scariest movie killers I've ever seen.

Though Burr is a big guy, he's not an ax-wielding, snarling, macho kind of killer. He's clever, quiet, and sneaky. You don't get a hint of the violence he's capable of until someone actually confronts him. Even then, you get the feeling he'd rather not mix it up with anyone, he just wants to get rid of the multiple packages that used to be his wife and get on with his new life.

Stewart's character is also not a macho guy, though he has a lot of courage. He's never afraid to say what he thinks, but even if he didn't have a broken leg, you get the feeling Burr could have kicked his butt. That's what makes the final confrontation between the two so suspenseful.

One terrifying moment that stands out in Aliens is the scene where the door to the freight elevator opens. You suspect the Queen alien is crouched in that shadowy space, but you don't know for sure until you see the light glistening on those dreadful teeth. In Rear Window, the cinematographer manages to achieve that effect with Raymond Burr's glasses as he steps into Jeff's darkened apartment. Somehow, this nerd gear is transformed into something really creepy and threatening. Burr manages to make the salesman sound both pathetic and dangerous when he demands to know who Jeff is and what he wants.

Rear Window doesn't have a formal score, unless you count the title sequence (“Juke Box #6”), a delightful crime-jazz piece written by Franz Waxman in the heyday of the great movie scores. Otherwise, music plays on the radio, or is sung by drunken partygoers, or is tinkered together on a piano by a struggling songwriter in his rooftop studio. The song he's working on eventually becomes an integral part of the plot, and by the end of the movie it's “Lisa's Theme.”

The plot threads are woven into a satisfying conclusion, and Jeff and Lisa reach a believable accord in their relationship. The ending of the movie is every bit as perfect as the beginning. That's why Rear Window will always make my list of top ten greatest movies.
Posted by Emily Devenport at 4:08 PM