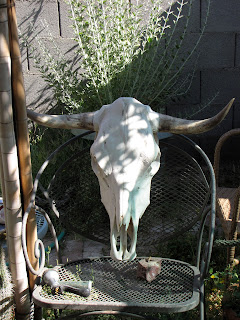 In a perfect world, Ernie and I would be traveling around Arizona at will, staying in cheap motels, ogling weird and wacky roadside attractions, and hiking mysterious realms. This may occur after we retire, but for the time being we have to be satisfied with day trips.

On Mondo Ernesto, Ernie wrote about a couple of those day trips: ROAD DAZED, DEEP IN THE HEART OF ARIZONA and UP CAVE CREEK WITHOUT A PADDLE. His illustrations probably do our adventures more justice than my photographs, but here they are anyway. 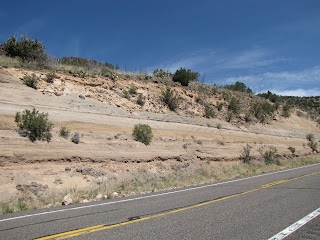 Behold HWY 260. It runs East-West (and in some places North-South) between Camp Verde and Payson. It does so at the edge of the Mogollon Rim, which might give you the idea that it skirts a distinct scarp for a good part of the way. But there is very little of the Mogollon Rim that is actually a recognizable rim. HWY 260 winds among hills, buttes, mountains, and valleys in the Transition Zone, and often the only indication that you've climbed onto the rim is a change in climate from high desert to scrubby juniper forest. As we got closer to Strawberry, the trees became ponderosas, and we saw snow on the ground. 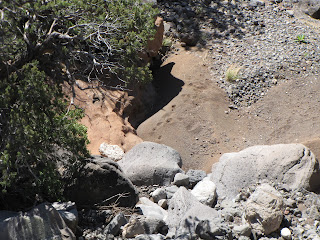 When you look at the road cuts, you can see that much of the area along HWY 260 was shaped by volcanic explosions that laid down layers of ash. I resisted getting out to lay hands on the stuff as long as I could, but finally succumbed. Along about this time, Ernie spotted footprints that he felt might belong to the Mogollon Monster. Take a close look – this is the only photograph that definitively proves that the Mogollon Monster wears high heels. 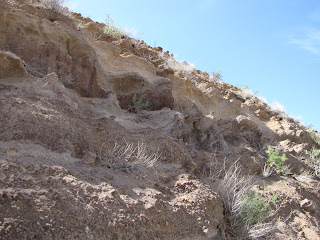 I had some half-baked plans about exploring fossil Creek, but the road was closed, so we headed over to Tonto Natural Bridge. I was still recovering from a bug that put me in the hospital a couple of weeks before, so we tried crawling along the creek that flows under the travertine bridge. We were doing fine until we got to a part where we had to get into the water if we wanted to continue. Ernie wisely advised that we turn around, but I thought we'd only have to go in up to our knees to get where we wanted to be. A few moments later, I was up to my waist. Ernie said he wouldn't follow, his wallet might get wet. That's when I remembered my wallet, which had to be emptied of a few ounces of water once I climbed out again. 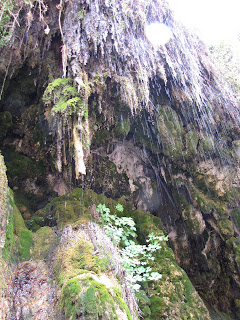 Drying out after falling into a creek takes an amazingly long time. By the time Ernie and I had driven HWY 260 into Payson and settled at the slightly mis-signed El Sierra Mexican Restaurant, I was still damp around the edges. But the food quickly made me forget my discomfort, and fortified us for the diagonal trip home on HWY 87 to Phoenix, through dazzling displays of wildflowers. Were would we go next? When we saw the sign that said HAZARDOUS MATERIALS MUST EXIT, did that mean us? Fasten your seat belt for the next installment – monsters lurk beyond that rim, and some of them are wearing spiked heels . . . 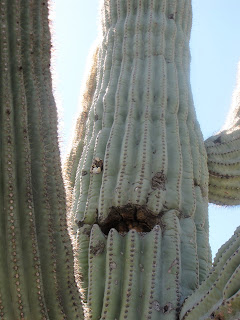 Posted by Emily Devenport at 8:28 PM