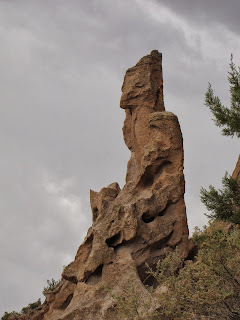 We have some interesting examples of continental rifts in the world, as well as spreading ridges in oceanic crust – and since these are both examples of diverging boundaries, geologists are justified in assuming that similar processes are involved in rifting. But that's a hypothesis. Observations of the process of rifting in the real world are revealing that continental rifts are more complicated.

One reason may be that oceanic crust is denser, but thinner than continental crust. The difference between them is demonstrated when the two types of crust are driven together. Continental crust is fat and buoyant, so the immense pressure pushes the thinner, denser oceanic crust beneath the continental crust (subduction). Water vapor that subducts with the oceanic crust allows it to melt at lower temperatures than it normally would, and the partially melted stuff rises through the continental crust above the subducting slab. As it rises, the reduced pressure allows it to melt further, where it also melts some of the surrounding continental rocks. It may pool between sedimentary layers, forming plutons, sills, and dikes that cool underground, or it may extrude onto the surface and form volcanoes. That's what can happen at a converging zone. But at the other end of that zone is a rift.

Oceanic rifts are ongoing projects – upwelling convection currents in the mantle inflate and stretch the crust above, causing fractures. Magma squeezes through fractures, forcing the crust apart even further, and forming spreading ridges. You might think that the magma would cool and plug the holes – something that happens quite often when magma extrudes onto continents. But the plug is temporary. The centers of those new dikes are weak, and they fracture from the pressure of the uprising heat, allowing more low-silica magma to flow into the new fracture.

Silica is sticky stuff. Magma with a higher silica content is less runny. At oceanic rifts, the runny, lower-silica magma is a lot less likely to clog up the dikes and vents through which it is welling. That low-silica magma actually cools at higher temperatures, and water is present to speed that cooling. But when magma cools, it shrinks, and fresh hot stuff can well up around it, gradually forcing the rift zone apart. You can actually observe the whole, extrude-shrink-extrude-again process in the nifty pillow lavas that form around oceanic volcanoes as magma hits the water, instantly cooling to form a shell, which bursts at its weakest point and forms a new blob when more molten rock is forced into it. (If there was a cable channel just for watching pillow lavas form, I would sign up for it.)

Oceanic rift zones seem to last as long as the upwelling convection currents that drive them (a phenomenon called slab pull may also be involved, with the weight of the dense continental crust being subducted into the mantle possibly pulling the plate from the other end). But continental rift zones may require more oomph to keep them going. Theoretically, the African Rift is doing the same thing that the Arabian Gulf is doing, forming a basin as the crust spreads apart that will eventually open up to form a new sea. The Atlantic Ocean formed that way when Pangea broke apart. Since spreading ridges in oceans are faulted all the way down to the mantle, you could expect that a continental rift would also have faults that run that deep. Evidence for that can be found in low-silica volcanic rocks in the Southwest U.S. Arizona even has a shield volcano, the sort of volcano one would usually expect to find above a mantle plume forming an island chain (like Hawaii). Yet the volcanoes along the U.S. Rift are not all of this type. Likewise, the volcanoes that have formed along the sides of the rift zone in Africa are a grab bag of different types, anything from volcanic vents and relatively flat volcanoes, to giant composites like Kilimanjaro. 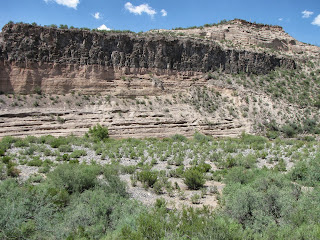 What this suggests is that sometimes low-silica magma is reaching the surface along these rifts (often creating extensive sills and dikes along the way), and sometimes it's mixing with the continental rocks it encounters on its upward journey and melting that stuff, introducing more silica into the mix and building composite cones at the surface, or cinder cones, or volcanic domes, or even creating plutons that cool underground.

Besides the silica ratio, another thing that determines the size, shape, and explosiveness of volcanic features is the amount of volatiles in the mix – gases. High silica/low gas mixes produce volcanic domes that extrude almost like toothpaste. Low silica/high gas mixes produce cinder cones. An intermediate mix can produce a composite volcano, like the one above Flagstaff, Arizona (far inland from where you would expect to find such a structure). The super-volcanoes of the Western U.S., Yellowstone and the Valles Caldera, are very high-silica caldera volcanoes that fractured the crust overlying them with expansion caused by heat, which allowed gases to escape through the cracks, widening them further and causing a collapse. The collapse of that surface material into the caldera produced titanic explosions. The rhyolitic tuff (fused ash) of Bandelier National Monument in New Mexico was created by an explosion from the Valles Caldera. Compare all that complicated stuff to good ol'oceanic rifting, and it just seems like such a straight-forward process in comparison. 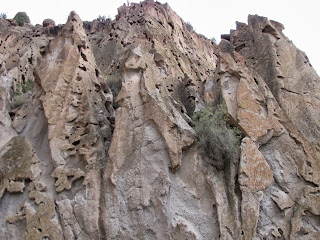 Continental rifts seem like a lot more work. Maybe that's why continental rifts sometimes seem to just stop. The rifting had some oomph when it started out, but the upwelling current shifted, or the plume stopped, or the older part of the craton, where the crust is too thick to be rifted, moved over the whole bubbling mess. (The tectonic plates, including continents, move gradually but steadily over the upper mantle.)

One failed rift is the North American Mid-Continental Rift (extending from Lake Superior to Oklahoma), which seems to have pooped out about a billion years ago. At that time, we were part of the supercontinent Rodinia, which split up about 750 million years ago. Two other supercontinents formed and broke apart after that. Eventually, North America will collide with Asia, and the rifting will start somewhere else. 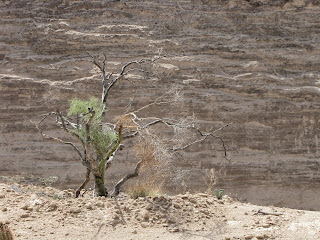 Posted by Emily Devenport at 9:39 AM