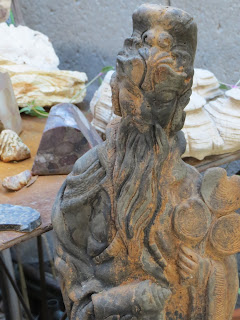 Listen up all you Spock fans and cosmic music lovers – here's your big chance to explore the soul of the Vulcan and your own cosmic roots at the same time. And if you're willing to do some promotion for Michael Levy, the experience is free! Such a deal! Click! Promote! Enjoy!

I am pleased to announce the release on all major digital music stores and streaming sites today, of "Ascension of the Lyre"; my most ultra-experimental album...ever!

This album is my most visionary recording project to date, attempting to ascend the lyre of antiquity from oblivion, onto a psychedelic musical odyssey through the solar system and beyond, into the music of our far distant future...

Inspired by the otherworldly sound of the "Star Trek" character, Spock's "Vulcan Harp", the title of this highly experimental album features a pun on the ancient Greek legend of the ascension of Orpheus from the Underworld (as depicted on the album cover - the most famous lyre player in the literature of classical antiquity) and my musical mission in this album: to literally ascend the lyre from its previous status as a dusty, long-forgotten ancient museum relic; onto a new musical journey into the 21st century and beyond!

I attempt this almost Herculean feat by literally creating for my recreated lyres of antiquity a new voice, by transforming their ancient timbres with a host of contemporary studio effects, magically metamorphosing the sound of the lyre into a 'musical spaceship', evoking cosmic visions of strange and distant worlds...

The album already has an extended review, which can be read here.

Here is the link to my brand new webpage, which lists all the major digital music stores and streaming sites from which the album can be purchased, the YouTube 'promo' video can be viewed and from which a PDF booklet of the detailed album notes can be freely downloaded:
http://www.ancientlyre.com/new_age_ambient_space_music_album/ascension_of_the_lyre/

As an 'independent artist', without the benefit of a record company to promote my music, for the first time ever, I am actually offering the chance to receive this album for free - in return for promoting the release on my behalf!

Great ways to promote the album, are in the form of online blog posts, album reviews on major digital music stores such as iTunes or Amazon and social media shares about the album, including links to streaming sites such as Spotify etc.

If anyone would like to become my 'promo agent' for the this album and in return, to receive this release for free, simply drop me a line!

Thanks once more, everyone, for your invaluable support in my ongoing musical mission to put some lost ancient soul into the soulless, modern musical world...
Posted by Emily Devenport at 7:41 AM