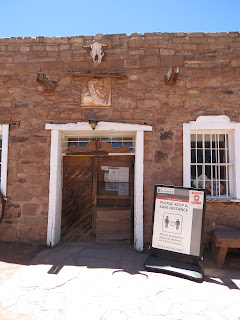 Ernest Hogan has posted his account of our road trip through eight Western states on Mondo Ernesto, and that has prodded me into linking my blog with his and telling my own version of the tale. Road-tripping is America’s favorite pastime, especially post-COVID, but it’s an odd landscape we’re all driving though these days, with high gas prices and wildfires throwing obstacles in our paths. We solved half that problem by picking up my brother Michael’s hybrid Prius in Flagstaff (it gets 50 mpg), but we quickly discovered that our plan to take AZ 89a north to hook up with the 160, which would then take us to the 191, was not gonna fly. Monster fires on either side of 89a forced ADOT to close that highway to everything but emergency vehicles. In honor of that semi-apocalypse, it seems only fitting that I post a photo of the ponderosa outside Michael’s house in Flagstaff, which survived a fire about 20 years ago. 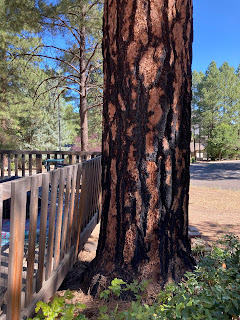 Michael had been expressing wonder for weeks that gas prices in Phoenix were so much higher than he had seen them anywhere else (except for California). The Shell station on the corner near our house had the price of unleaded at $5.99 per gallon at one point, but it had settled down to $5.69 by the time Ernie and I started our trip (as of this writing it’s at $4.59, and I’m harboring fond hopes that it will drop below $4 by the end of the summer). Our spirits were high, but we could tell there were some political tensions brewing over the world in general and the U.S. in particular, what with the hearing about Jan 6 being held in D.C., the war in Ukraine, and the Supreme Court getting ready to hand down a decision that looks like it might change the usual course of elections in the midterms. I was happy to be taking a step back from all that, though I couldn’t escape the wildfires up north. We decided to drive east on I-40, then take 191 north all the way up through AZ and Utah. It turned out to be a wonderful (if somewhat confusing) route. We needed to consult our Arizona Road Atlas when 191 fragmented near the northern border of AZ, seeming to go left when we needed to go right. We sorted it out and headed for Blanding, Utah, where we thought we would get the best Navajo Tacos in the world for late lunch/early supper. 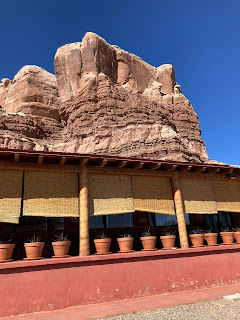 Alas, we were thwarted in that ambition. Twin Rocks Café was closed for the day, due to staffing issues. The lady there recommended the Cottonwood Steak House, where this Jackalope resides. 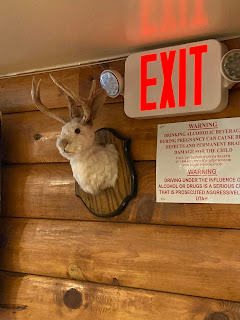 Our ambition was to get to Grand Junction, Colorado, by 9:00 p.m., and we made it just about on the nose. Michael had already checked into the room – our intrepid driver was on board, and we were ready to take the road by storm, lattes and fast-food chicken sandwiches in hand. It was odd to have so much sunlight left in the sky at 9:00 p.m., but it turned out to be handy on this trip. We often did so much shopping, driving, and sight-seeing, we needed that extra light as we motored into each stop at the end of our day. 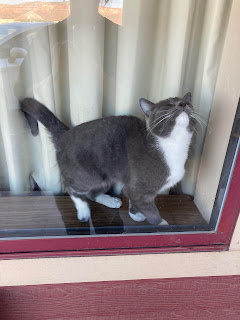 On the morning of our second day, we met a hotel cat. We snagged some Einstein Bros Bagels and coffee, and drove north to Dinosaur, Colorado, named after Dinosaur National Monument, which is technically in both Colorado and Utah. The part that people visit is in Utah. 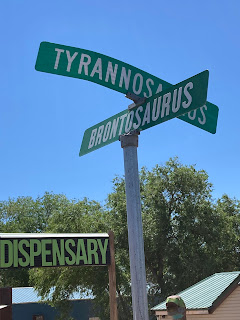 Considering how hot it is this summer in so many parts of the world, this ice-cream-eating dino must be a popular guy. 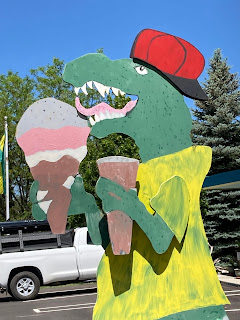 The formations out of which the dino bones have been excavated were sand bars that formed after a mega-flood, sweeping up the poor, giant creatures and burying them in a mass, prehistoric grave. I’m assuming that eventually the bones in the topmost section began to stick out when the sandstone around them eroded away, and people recognized what they were seeing. 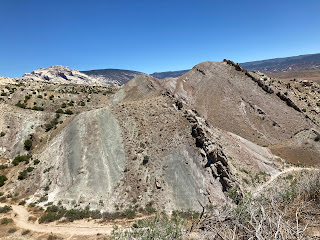 It was the jackpot, because several intact skeletons were in there. The visitor’s center features some bronze reproductions of some of the dinosaurs that were removed. 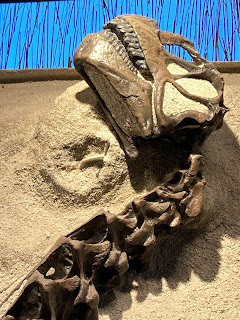 There’s a hike not far from the old dig site (which has its own museum), and of course we had to trek that way, snapping pictures as we went. 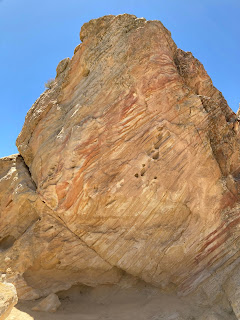 Michael had his ideas about what we should photograph (he’s a director, not a cinematographer), and once we were done with the dig site, we also had to find the petroglyphs and hike up to them, as well. They were worth the effort. 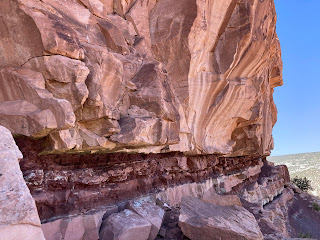 We captured ancient spirits in our infernal phones. 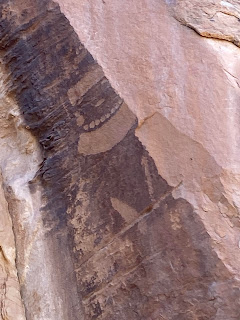 When we drove to nearby Vernal, there were plenty of things in town that also needed to be documented. 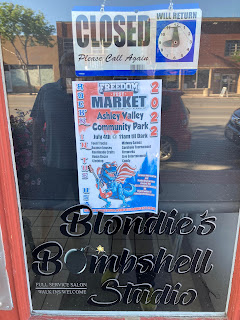 We stayed at the Dinosaur Inn (this was de rigueur) and ate supper at what the clerk assured us was the best Mexican restaurant in town, Raza Mexican. It was kind of a huge meal, and we should have probably split a plate, but it was good. 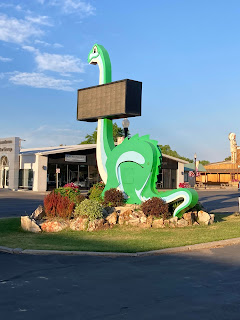 We would be off to Idaho and the City of Rocks the next day. Things were just getting started . . . 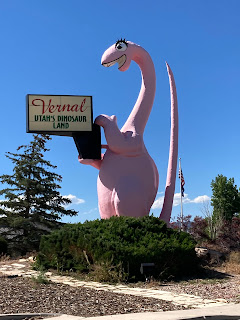 I admire the hanging baskets you can see on city streets in Northern Utah and in Idaho. We could never get away with those shenanigans in Arizona. 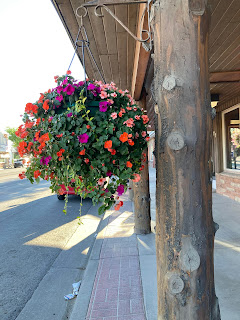 There’s a lot more to this trip. Follow if you dare. 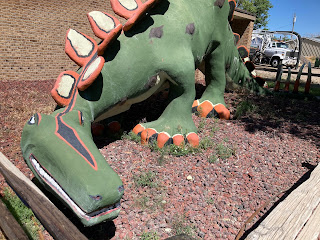 Posted by Emily Devenport at 1:00 PM