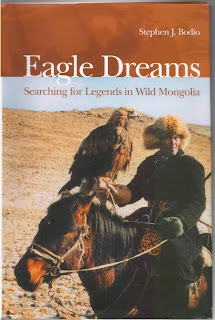 I have proof positive that NATIONAL GEOGRAPHIC warps young minds, causing kids to grow up to be explorers, adventurers, world travelers, and writers. When Stephen Bodio was a kid back in the fifties he opened a magazine and saw a photograph of a Kazakh nomad and his hunting eagle. It haunted and inspired him for decades until he finally got a chance to go to Mongolia and find those nomads. His adventure is recorded in his book, Eagle Dreams. On the cover is yet another photo of a Kazakh nomad and his hunting eagle, and that photo haunted me until I could track down this book.
Now I hope to do the same thing to you.
Don’t get me wrong, I’m not a hunting enthusiast. I’ve got nothing against people who hunt for food, it’s just that I don’t know a lot about the subject. I’ve got lots of other time-consuming hobbies, like rockhounding, hiking, and recipe-mangling, and there’s only so much time in a given day. Also, I am way too sentimental about animals, and if I had to actually kill the cows I so love to eat, I’d be relying on fish, eggs, and cheese to get my protein fix. It’s my love of birds that drew me to this book, from the tiny hummingbirds with the big attitude to the semi-fabled Harpy Eagles of Africa. Couple that with a picture of a nomad descended from Chingiz (Genghis) Khan with a gigantic Golden Eagle perched on his arm, and you’ve got my attention.
Bodio’s account of his journey is not a long one, though it took him decades to realize his dream. Like many adventurers, his path is oblique, almost accidental, and he ends up in Mongolia mostly because he maintained contacts with editors who could eventually send him there. It’s a story of persistence and resourcefulness – and courage as well, not because the nomads were a danger to him, but because he encounters unknown cultures, labyrinthine bureaucracies, and harsh living conditions. Once he manages to make the trip, he employs natural diplomacy, patience, and intelligence to win the trust of the nomads. He never brags about any of this; Bodio tells his story with self-deprecating humor. Neither does he bog the story down with too much terminology, it’s easy for non-birders (not to mention non-world travelers) to follow.
Bodio’s story packs a lot of good information into 216 pages, but more than anything else, the story inspired me. I’m not as resourceful as Stephen Bodio and probably not as brave, and I doubt I could win the respect and trust of Kazakh nomads who hunt with young eagles – though I might be able to amuse their wives by mangling a recipe or two. But I am a fellow traveler, and his account makes me want to venture out more, even if it’s just into the American Wilderness.

Take a good, hard look at the cover of this book. But be warned, it has unexpected side effects. May cause dreams.
Posted by Emily Devenport at 9:02 AM