Hal 9000 Was Not the First Computer Heavy In Movie History 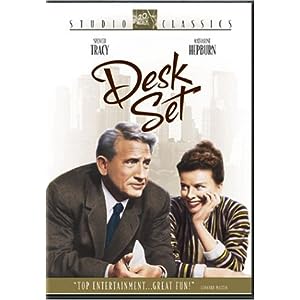 Most people who write a best movies list that includes a movie with Katherine Hepburn choose something other than Desk Set. They may prefer Pat & Mike or Adam's Rib, titles that are much better known. Almost certainly, they would name The African Queen, which deserves to be honored.

In fact, The African Queen will be the subject of my next blog entry. And of all the romantic comedies that Katherine Hepburn and Spencer Tracy made together, Desk Set is my favorite – for one simple reason. It's a science fiction movie.

No, it doesn't have ray guns, space ships, or aliens. But it satisfies one of the most basic criterions of a science fiction plot: it's about how technology changes the lives of people who use it. In this case, it's about a civilian application for an early computer, the EMERAC (probably based on the UNIVAC and the ENIAC). Spencer Tracy plays the efficiency expert who is adapting the computer for a business interface, and Katherine Hepburn is the head of the reference department at a New York Magazine that will try to integrate the big computer into their operations. Since the computer processes questions and is supposed to come up with instant answers, the reference staff is understandably nervous about their jobs.

This is one of the main conflicts in the story. The employees in the reference department are all female, and you get a glimpse into the lives of an earlier generation of working women. The wonderful Joan Blondell is Peg Costello – who, like the other gals in her department, is single, independent, and older than people probably expected a working woman to be in those days – old enough to be married, in other words. They have to be ingenious to make ends meet, but you get the feeling that none of them have met a man for whom they would be able or willing to give up their independence – except, possibly for Hepburn's character, Bunny Watson. She does have a fella she's serious about: Mike Cutler, played by Gig Young. But he keeps putting her off until his career takes off, something it always seems to be on the verge of doing. By the time the computer shows up, he's starting to take her for granted.

That's the other conflict in the story. Because Tracy's character, Richard Sumner, is quite charmed by her. He's fascinated by the way the women perform their jobs, especially by the way their memories work. He notices that Bunny uses association as a memory tool. And he enjoys the quick, witty responses she comes up with when they talk. I suspect he also notices her trim figure and dazzling smile, but he is so unassuming and courteous, this is more of a conclusion than an observation.


Bunny tries very hard not to like Richard – after all, he's programming the electronic monster that will make her obsolete. But something between them just seems to click, and pretty soon the luke-warm boyfriend begins to notice that he's got competition. Suddenly he's not so inclined to take her for granted. But will he rally in time?

If you're familiar with the pattern in Hepburn-Tracy movies, you already know the answer to that question. But the characters are so likable, you just can't help getting caught up in their lives. And in the meantime, the big computer is looming over everybody's job, until the day when it generates a bunch of pink slips for the reference department. Neither love nor computerization goes smoothly for anyone in this film.

But in the end, you cheer for both. Desk Set is not a grand film that forever changed the art form. But it is an irresistible snapshot of a particular time and place, a moment of change in American business and American romance. I watch it at least once every year, so I can take a brief vacation to that time and place. That's why it goes on my list of the best.
Posted by Emily Devenport at 11:03 AM