Shadows Of A Lost World

Many people would put a movie by Akira Kurosawa on the list of top ten films, and that choice would be justified. There are quite a few Japanese filmmakers who have earned a place on that sort of list. But for me, the first movie that always comes to mind when I think of great Japanese films is the horror classic, Kwaidan, directed by Masaki Kobayashi.

Based on the ghost stories collected by Lafcadio Hearn, Kwaidan is spooky, gorgeous, and fascinating. It takes its inspiration from classic Japanese illustrations of ghost stories. The last time I watched it I realized something amazing – this lavish production was filmed entirely inside a studio. This includes a segment depicting sea battles.

The first segment, “Black Hair,” is not my favorite, but I like it more every time I see it. I think it depicts the true experience of a haunting, which is always more psychological in nature. A samurai is sick of poverty, so he abandons his wife and marries the vain daughter of a wealthy nobleman. His fortunes immediately improve, but he can't forget the wife he so callously abandoned. Eventually this obsession with the past wrecks his new life, and he goes home again to salvage his old life. But what is waiting there for him? I love the gorgeous, moody sets in this one. I especially like the character of the spoiled new wife. She isn't likable, but she's very interesting. 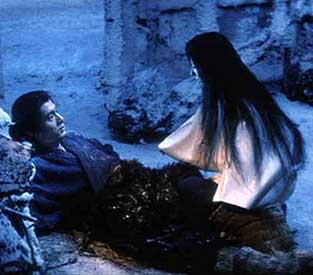 The second story, “The Snow Maiden,” has a lot in common with European fairy tales. A man witnesses a fey creature killing another man. She almost kills him too, but she falls in love with him and can't bring herself to kill him. Instead, she makes him promise never to tell anyone what he's seen. The actress who plays this creature manages to make her really scary, just with her body movements and facial expressions. I think she takes her cues from classical Japanese theater – at times her expressions are mask-like. The same actress manages to look warm and kind when the fey creature imitates a human woman so she can marry the man. The outcome of this union also mirrors European folk tales – I won't reveal it here. I love how this segment uses stage techniques for its special effects.

My favorite segment is the third, “Hoichi The Earless,” and I suspect that's the case for most viewers. It has spectacular battle scenes, and the way they're narrated is particularly brilliant. Hoichi, a blind monk, is a very talented balladeer, and he knows the story of the Dan-no-ura battle from beginning to end. As he performs this ballad, the scenes are enacted. The camera alternates from live-action segments (entirely filmed inside the studio, though they're sea battles) to painted panels depicting the battle. You could consider this the most kick-butt segment of the movie. But I like it for more oddball reasons. To me, the ghosts in this segment aren't just shadows of that battle and that ruined clan, they depict a lost age. The remarkable formality of their lives, the protocol dictating their day-to-day existence, is marvelous and awe-inspiring – and lends credence to Shakespeare's assertion that all the world is a stage.

An interesting detail from the battle is a scene in which a woman leaps into the sea with the young emperor rather than risk capture by their enemies. This woman is steely in her resolve, a stark contrast to the weeping young woman who quickly follows them into death. It took me a few viewings to realize that the stern woman who orders her followers into the sea must be the dowager empress – the boy's grandmother, rather than his mother (the mother must be the weeping woman). As the mother of the deceased emperor, she would have had absolute authority until the boy came of age. Because of that battle, the boy never gets the chance, so she takes him into the sea to save honor, which she prizes above all else. Under the circumstances, I can't blame her.

After that amazing third sequence, the final story, “In A Cup Of Tea,” is a bit of a let-down. I think the purpose of that sort of story in a book is to bring the readers back down to earth and end on a humorous note. But in the movie, I often find myself running out of patience with it before it's over. It probably should have been placed at the beginning instead of the end.

Despite that minor flaw, Kwaidan still rises to the top. It will always fascinate and chill me. It will always be on my list of top ten movies.
Posted by Emily Devenport at 9:06 PM