In this age of ghost movies that rely on “boo” tactics and images of people being thrown around rooms, a very important fact has been mostly forgotten: a good ghost story is not about the ghost. It's about the people being haunted by the ghost. If it's done well, the audience will eventually realize that the ghost is not the only thing haunting those people – possibly not even the most frightening thing.

The Haunting is the best example of that kind of ghost story. The book (The Haunting Of Hill House), by Shirley Jackson, is one of my favorite novels – and the original movie, filmed in 1963 and directed by Robert Wise, is one of the few adaptations that actually does justice to the source material. In fifty years, very few movies have been made that can rival it in spookiness. And the wonderful thing about it is that no high-tech special effects were used – it was all great location, good acting, lighting, choice of film stock, camera angels, sound effects and music, and on one occasion a broom handle applied to an old-fashioned, moulded door. You never see a ghost. 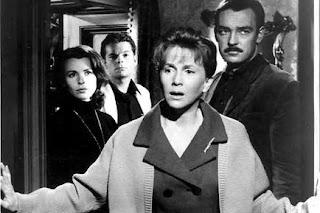 So how can a movie that never shows a ghost be spooky? It starts with a good story and some troubled characters. The premise in the beginning is that some places are just bad. Maybe they started out that way, maybe someone made them that way, or maybe it was a combination of the two. Somehow a sediment of despair, sorrow, and fear has accumulated there, and it affects everyone who visits. The focal point of this wrongness is Hill House, a place built by an extremely authoritarian man whose version of Christianity makes the Puritans look like a bunch of free-love hippies. He wasn't content just to build an imposing pile of a house – he has to make sure that the place is a maze, both mentally and physically, where people are lost and eventually trapped. The angles are deliberately off by a few degrees; doors will silently swing shut if you've left them open.

The real setting of Hill House was a hotel in England, a beautiful place that is made sinister by lighting, special film stock, camera angles, etc. You get a glimpse of how nice the place really is when you look at the scenes done in the breakfast room and the music room. Turn the lights down and focus on some of the details of that house that would seem charming and quaint in the daylight, and suddenly you see faces among the leaf patterns on the wall and doorknobs that look like they're watching you.

Add the right characters to this setting, and things just have to happen. Professor Markway (Richard Johnson) is the perfect guy to get the ball rolling. He's a scientist to the core, looking for observable phenomena that can be recorded and analyzed. He believes that what seems to be supernatural is really natural-but-misunderstood. His wife (played by Lois Maxwell) does not agree – she is not only skeptical, but aggressively so, and very annoyed with him for embarrassing her in the upper-class circles in which she runs. Luke (Russ Tamblyn) is a spoiled rich kid who is simply hoping that he can make a profit on the old pile once he inherits it. Theo (Claire Bloom) is able to sense the thoughts and feelings of others, an ability that has often made her unhappy. And then there's Eleanor.

Unfortunately for Eleanor (Julie Harris), she has something in common with one of the ghosts of Hill House. This similarity makes her especially vulnerable to the house. On top of that, she's a sheltered woman who was never able to spread her wings until this odd trip in which she gets to belong to the team of investigators. She falls in love, and the love can't be fulfilled.

I've always thought that this team of characters could have carried a TV series for at least a couple of seasons, if it were well-written. TV executives would probably balk at the cost of special effects for such a show, but that's the irony – CGI ruins ghost stories. The old-fashioned, clever, and inexpensive effects of this movie are the best sort of effects to use for story lines that rely on the psychology of the characters – and the psychology of the audience. When you watch The Haunting you believe you've seen things that were actually never shown.

That's true movie-making genius. And that's why The Haunting makes my top ten list.
Posted by Emily Devenport at 2:38 PM