Cosmic Dad And His Robot 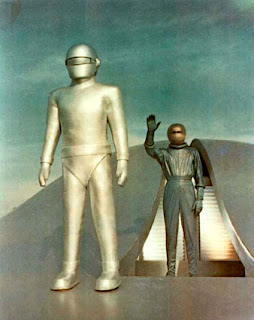 In my previous Best Movie blog entries, I've mentioned scenes that I believe to be the heart of those films, the essential expression of their nature. In La Belle et La Bete, it's the scene where Belle and the Beast walk together in the garden for the first time. In Bad Day At Black Rock, it's the scene where Macreedy delivers a karate chop to Trimble, proving that one-armed war veterans should not be underestimated by small-town thugs.

In The Day The Earth Stood Still, it's the scene where Klaatu signals Gort with the flashlight, then enters his spaceship, while Bernard Herrmann's incomparable score plays in the background (a segment called Nocturne/The Flashlight/The Robot/Space Control). With no dialog, it manages to convey a supreme sense of wonder as we're invited into that alien ship to glimpse the Unfathomable.

Like Rear Window, The Day The Earth Stood Still has no wasted scenes, every frame counts. The difference is that the score forThe Day The Earth Stood Still is an integral part of the movie – it's essential to help tell the story. Movies like this are one of the reasons music videos eventually became so popular – images and sounds, when combined, are powerful storytellers.

In a way, it's surprising this movie ever got made. It's based on a classic science fiction story, “Farewell To The Master,” (Harry Bates, 1940) which has a very different plot. Only the basic premise of an alien visitation remains the same, and the fact that there's a robot. These are nerdy elements, and in those days they were usually relegated to the realm of the B movie. YetThe Day The Earth Stood Still was made by an A-list director, Robert Wise – which is why it also earned an A-list composer for the score, and an excellent cast and script (Edmund H. North).

Many people have seen a parallel to the storyline of the film and the Jesus parable, with Klaatu as the Messiah. At one point, he is killed and resurrected. But though Klaatu is ethical and wise beyond Human standards, his message is not one of joy and peace. Basically he's on Earth to tell us, Look, you're a bunch of destructive yahoos. If you're so petty and foolish that you have to keep killing each other, that's your business. But if you bring your conflicts out into space, we'll blast you into oblivion. The choice is yours.

He doesn't deliver that ultimatum until the very end of the movie – up until that point, most of the humans he encounters spend their time proving that his lack of faith in us is utterly justified. People react fearfully, and the government fails to approach Klaatu with diplomacy (they opt for the Scorched Earth approach). A few of the people he meets manage to win him over. You never get the impression that he hates us, just that he's disappointed that we can't grow up and get a clue. Heck, I'm disappointed by that, too. Being a member of the Human Race is like having a cousin who's a great guy – unless he's drinking.

Both Michael Rennie and Patricia Neal give their characters extraordinary depth. They come from a time when “The Theater” included plays acted on stage. In the early days of Hollywood, casting directors recruited heavily from a stable of extremely well- trained and talented character actors from that earlier tradition. This is one of the things that puts the Day The Earth Stood Still in a category above many of the Science fiction B films of that era (fun and imaginative though they could be).

The special effects are fairly minimal – just some minor animation when Gort disintegrates guns and tanks (also a soldier or two when the going gets tough). Everything else is camera angle, lighting, great editing, perfect music. I'll take these old-fashioned psychological effects over CGI any day.

Beyond the fact that it's a great Science Fiction movie,The Day The Earth Stood Still has a personal dimension for me. The first time I saw it, I was about eight years old, and my father didn't live with us. He and my mother had divorced a few years before, but I didn't know that. He served in the air force, and the Viet Nam war was still going on. I knew my father was deployed there, so I assumed he wasn't home because he was fighting in that war. I was only half right.

In the movie, Klaatu befriends a boy. His behavior toward that boy is fatherly, and I've always sensed a bit of romance between Klaatu and Patricia Neal's character. When I saw Klaatu get into his ship at the end of the movie and fly away, leaving the woman and her boy behind, it broke my heart. It still does, every time I see it. Posted by Emily Devenport at 8:48 AM