If you've never seen Bad Day At Black Rock, you may assume someone named Bad Bart is prominently featured in the story, along with a shootout at high noon. You'd be wrong on both counts. You'd also be wrong if you assumed it was an old-fashioned Western. It's more of a new-fashioned Western, set in an Arizona town that's little more than a dent by the side of the road, just after WWII. That great war may seem like a simple background detail at the beginning of the movie. It's anything but.

Bad Day At Black Rock is a hard-boiled mystery/action/thriller starring Spencer Tracy as Macreedy, a one-armed war veteran who has come out West to fulfill the dying request of a fallen comrade. His destination is a small town that is barely more than a train stop, so you would think the folks who live there would be happy to see visitors. But they have a big secret weighing them down, and they can tell this particular visitor is going to get right to the heart of that secret.

Every time I see this movie, I try to figure out where it was filmed. Some of the rock formations look like Southern Arizona. It was actually filmed in the Mojave, but it could be one of several Southwestern locations, a desert with vast, empty space between each town. Space may represent freedom in some circumstances, but in this case it's more of a prison for Macreedy, who can't survive that huge stretch of arid desert if he isn't in a train or in a car with plenty of gas. Since he's arrived on the train, and it won't be back for a few days, he's got to survive until it does – and that turns out to be a huge challenge.

The Bad Guys know Macreedy is a threat to their secret from the moment he gets off the train, yet they underestimate him – and the audience may feel the same way, at first. Macreedy lost an arm in the war, and he's one guy against many. He has courage and integrity, and he's smart, too – possibly too smart for his own good. He asks few questions, but those questions are too perceptive. He sees the trap closing around him, but he doesn't knuckle under. Instead, he keeps thinking. He reacts calmly to the bluster of bullies and never shows them the fear they'd really like to see. This keeps them guessing long enough to buy him a little time. But will it be enough? 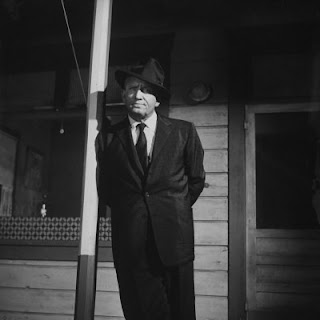 You may think you know how things are going to turn out, but Macreedy has at least one trick up his sleeve that will have you cheering. He is a hero, someone who learned to fight in the war. If this movie had been made after 1970, it probably would have been spoiled by having Macreedy beat all the bad guys up with kung-fu expertise. Hollywood has really lost its ability to depict heroes realistically. True heroism is when you're facing down unfair odds and getting your head handed to you on a platter, yet you still try to do the right thing.


The score was composed by Andre Previn, who "deals in the realm of creating tension and release in his sonic dramas," according to reviewer Lindsay Planer on Allmusic.com. The casting of Bad Day At Black Rock is a who's who of great character actors. Ernest Borgnine is a perfect bully. Robert Ryan is chilling as the Boss behind the scenes, the guy who has always run the show in that unhappy little corner of the world. Anne Francis is best known for her role in Forbidden Planet, but she shows a much broader range here as a woman trapped between a rock and a hard place. Dean Jagger is a ruined marshal who regrets trading his soul for the bottle. And no one could play Macreedy better than Spencer Tracy. He's another actor from the Golden Age of Hollywood, when they were willing to cast leading men who didn't have perfect faces and bodies. It's the force of his personality that makes him stand out from the crowd.

As we get further into the 21st century, those of us who grew up in the shadow of WWII are starting to die off. Many young viewers may miss the point of Bad Day At Black Rock – that a Japanese-American soldier wants his father to have the purple heart he earned fighting for his country. The internment camps are still discussed in history class, but if you don't know someone who went through that, if you didn't go through it yourself, it's hard to understand why someone got killed because of what was going on back home – or why the killers would kill again to keep the secret. This movie is a window into those times. Look through it, and maybe you'll understand why Bad Day At Black Rock is on my Best Movies list.
Posted by Emily Devenport at 7:28 PM