Where Is My Beautiful Beast?

Jean Cocteau's La Belle et La Bete is on a lot of Best Movie lists, sometimes for snooty reasons. After all, it's foreign (that'll get you 4 stars right there), it's French (there are a whole class of movie critics who like nothing but) – and it's relatively old (made just after WWII), so it qualifies as a “classic.” But sweep aside all that pseudo-intellectual noise, and you're still left with a magnificent movie.

I discovered it accidentally. Most of the people I grew up with, went to school with, worked with, never knew it existed – and if they had known, they might have thought it was dumb and boring because there weren't any car chases or explosions. Plus you have to read subtitles – what a bummer!

But there are times in your life when you're ripe for magic. I was fourteen, and I had my own (black & white) TV in my bedroom. I loved that thing, because it showed me worlds far outside my little Phoenix suburb. One night I was surfing (in this case, actually turning a dial), and I landed on our local PBS station. I saw a beautiful woman entering what looked like a haunted castle. Disembodied arms held candelabra in the entryway, and she glided along the hallway outside her bed chamber as if the floor were moving. There was no sound, and when she turned to run from the castle, she moved in slow motion. When she got to the courtyard, she was confronted by a magnificently dressed man with the head of a lion. She fainted. He picked her up and carried her back into the castle.

That was IT, my friends. That scene was like an arrow to my heart. No way was I going to touch that dial until the movie was over. It replayed the next night, so I watched it from beginning to end. No other attempt to film the story of Beauty And The Beast has even come close to it. No other attempt ever will. There are several reasons why. 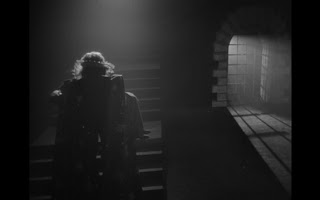 Maybe the essential reason is Jean Cocteau. He was like an author writing a book. This makes sense when you consider that he was a novelist, painter, playwright, and poet, besides being a filmmaker. Though he was a poet, he knew that pursuing poetry too enthusiastically can cause it to elude you completely. And I suspect that the romance in La Belle et La Bete was more personal for Cocteau than it ever was for other directors who filmed the story of Beauty And The Beast. Of all the characters in his film, the one he seemed to relate to the most was Belle, played by Josette Day. In his book about making the movie, Diary Of A Film, Cocteau wrote a little note about Josette. He said she looked like he had when he was younger. When you consider that his lover and lifelong friend Jean Marais played both the Beast and the other man who loved Belle (Avenant), this little note takes on extra significance.

Considerable credit for the look of La Belle et La Bete belongs to Christian Berard, the art director, and Henri Alekan, the cinematographer (just two of of the artists/technicians who deserve credit). According to Cocteau's own diary, he did not always agree with his team, and often felt frustrated with them. Yet he persevered in his collaboration with them, trooping forward even though he suffered from bouts of illness. The production was an expensive challenge, he really had to improvise to get supplies, line up shooting locations (many of the beautiful garden scenes were shot at the Chateau de Raray), and design special effects. Though it may seem like filming the production in black & white was an artistic choice, he indicates in Diary of a Film that he would have preferred color – it just wasn't an option in post-war France. It's hard to say what that color production would have looked like – the black & white turned out gorgeous. The acting is superb.  And the folktale was originally adapted for print by two Frenchwomen, so perhaps Cocteau was sensitive to what was between the lines. But two things that really make the movie stand head and shoulders (and mane?) above other versions are the “creature” design for the Beast and the beautiful score by Georges Auric. The Beast was so splendid in his velvet outfit and starched collar, so perfect as a lion, it makes you sad when he eventually metamorphoses into a man at the end. This outcome is not helped by the fact that Jean Marais is wearing those silly pantaloons that look like the little tents that go on the end of Thanksgiving drumsticks. Legend has it that Marlene Dietrich, after witnessing this transformation during a screening in Paris, asked, “Where is my Beautiful Beast?” I'm inclined to agree. 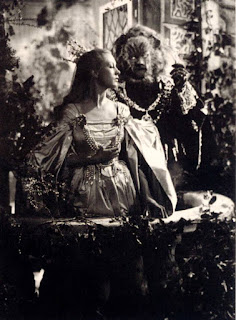 Georges Auric's score is also on my list of top ten scores. I love it from beginning to end, but one segment haunts me – the scene where Belle and the Beast walk together in the garden for the first time. There's something timeless and magnificent about that scene – I think it's the heart of the movie.

Great books, music, and movies are made by brilliant people who are unique because they are a product of their particular place and time. That's why other attempts to reproduce what they've done are unsuccessful. No one will ever write a fantasy likeThe Lord Of The Rings, because Tolkien was a British man who was born in South Africa near the end of the 19th century, emigrated to England, and eventually served in the trenches of World War I. Likewise, Cocteau and his team of filmmakers had their unique experiences and vision (not to mention their own Great War). The result of their collaboration is a movie that will be loved as long as people are still watching movies. It's magic truly is timeless. 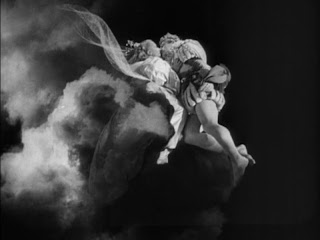 Posted by Emily Devenport at 10:23 AM