Confessions of an Online, Real-Estate Lookie-Loo 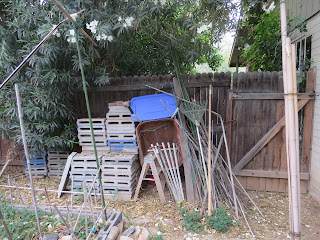 The first time I went house hunting, online real estate sites were fairly primitive. This was only fifteen years ago, so it seems funny to talk about the magnitude of change in computer processing power, internet speed, and usability of websites as if I were talking about the difference between WWII fighter planes and the most current stealth fighter jets, but that analogy may be the best. The rate of change and improvement in internet services is dazzling.

But even back then, I was impressed. You could see pictures of homes in your price range and sort the data based on square footage, number of baths and bedrooms, whether there was a fireplace or swimming pool, and other features. The best site was run by a local news station. I quickly became addicted to it.

The only problem was the site always froze up my computer when I was on it for more than half an hour. This was frustrating, because I found it more entertaining than TV. I would have been on that site until my eyeballs melted, comparing details of homes for sale.

When we were ready to buy, I hired a realtor. We visited many of the homes I had viewed online, and they often turned out to be not as nice in person (to put it kindly). And the house we eventually bought was not one of the homes I had seen online, mostly because the listing was only a couple of days old.
We've been happy in our place, and we expect to be here until my retirement, around 2027. A long time in the future, right? So you would think it would be pointless to look at real estate websites right now.

But I find the siren call of these sites irresistible. The listed homes have an undeniable mystique. Your home is the place that belongs to you – your domain, your castle, the place where (ideally) you're safe and comfortable, where you can express your creativity.

Owning a home for fifteen years has taught me that home can also be your money pit, your responsibility, your albatross – sometimes your nightmare. This is apparent when you look at the photos people have posted online of the homes they're trying to sell.

Which brings me to the other attraction of looking at homes online: the side-show aspect. The parade of neglect, bad judgment, wretched DIY projects, and even more wretched professional upgrades can have you clutching your face in horror one moment and laughing until you cry the next. It's better than anything reality TV has to offer (including the shows about looking for homes).

I always look at properties that are close to the range I hope to be able to afford. You would think I would want to see how the other half lives, but the high-priced homes seldom live up to their hype. The affordable homes reflect the realities of the way people really live. That's why scoping out the real estate for sale in a town can be even more informative than checking median incomes, crime rates, and weather averages. Who can afford to live there? Are they able to maintain their home? Do they need heavy security bars or shutters? What kind of flood/fire damage can be seen? (Is the new carpeting hiding blood spatter?)

All of that is important, but it's just the tip of the iceberg. Though my curiosity drives me to check out the choices, I've become hooked on the general weirdness. Here are some of the observations I've made in my obsessive search for a home I'm not even going to buy yet, in no particular order of importance.

1. It turns out that a little town named Bisbee, AZ has the best selection of houses in my price range. This seems like fate (probably because I haven't seen any of these homes in person).

2. Price doesn't necessarily determine the quality of a house (especially in Bisbee). You may think that higher-priced houses would also be higher quality, but this often means that you're paying for the location, or that expensive (and often appalling) remodeling has been done. Which leads to this observation:

3. Most (if not all) kitchen remodels are way overdone. Yes, it is possible to have too much granite and tile, usually in bold colors that only the original owners would like. True, the real estate agent will often suggest this sort of upgrade, but many people feel overwhelmed when it comes to choosing colors/patterns/textures, and you can end up with what my boss likes to call "Tuscan Everything."

4. Bathroom remodels usually aren't as scary as kitchens, but plumbing can be kind of odd, with toilets, sinks, and tubs crammed together so tight you have to wonder how anyone got in and out of there – or placed in really weird spots, as if the bathroom were designed by someone who knew absolutely nothing about plumbing (a very high likelihood, considering the current DIY craze).

5. The worst color in the world to paint an ENTIRE ROOM is dark red. But many people apparently love bold colors that no one else could stand, including truly awful shades of orange, yellow, purple, green, and in one memorable case a patriotic red-white-and-blue theme. (Oddly, some of the folks in Bisbee make those colors work.)

6. All laminate wood flooring is not created equal.

7. People who have remodeled their homes to make them more attractive for prospective buyers are really fond of tile flooring. Miles of it. Everywhere. Some of it the color of intestines.

8. An amazing number of people will buy a beautiful, vintage house, and then "update" all of the charm and beauty right out of it. Damn their eyes.

9. The vast majority of murals painted on the walls of children's rooms are both poorly done AND scary.

10. Your taxidermy projects are not a selling point. With the rare exception of stuffed jackalopes. (If you have one of those, try to stage the photo as if the jackalope broke into your house and took a selfie.)

11. People will sometimes decide to take out a wall in order to open a room up, but fail to consult an architect, and then discover that the wall was a load-bearing wall, but they've already destroyed most of the wall anyway, so they take it out and put in a supporting post that just stands there in the middle of the new room looking awkward and totally ruining the effect they were going for in the first place.

12. A lot of people think they're really good at landscaping, and they're just so wrong.

13. Having a fireplace is not necessarily a good thing, especially if the bricks over the top of the fireplace are badly charred from the time that you built the fire too high in there. This tells prospective buyers that: a.) you're a danger to yourself and others, and b.) your heating system is crappy.

14. Original wood floors are nice, as are wood ceilings, but it's possible to go overboard with wood in other parts of the house. Like bamboo that's been glued to every possible surface.

15. That trend where you stencil words on the walls, like in the dining room or in people's bedrooms? Stop it. Stop it NOW.

16. Yes, I know that you're still living in the house because you can't move until you sell it. But for pity's sake, rent a storage unit and dump 75% of your stuff in there. Don't leave it piled all over the place so it's visible in all of the photos you're hoping will sell your house. This is particularly true of your DUCK DYNASTY posters.

17. If you're anything like me, even after you've put 75% of your stuff in storage, your house is still going to look too crowded. Because:

18. Deep down, we're all just a bunch of bears with furniture.

I hope some day I'll be able to turn my lookie-loo web surfing into an earnest search for a house where we can retire. I know once that happens, most of the fun will go out of the process, but those real estate sites will still give me a good idea what's out there. There is one thing, however, they will never be able to tell me. If I move into one of those homes, will I be able to see the stars at night? Being able to see the Milky Way is more important to me than having a fireplace.
For me, that's a deal breaker. 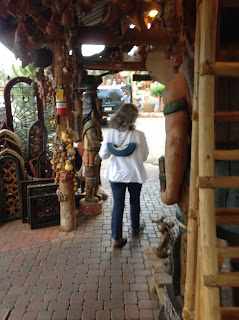 The photo at the top of this page is what our side fence looked like before it was torn down and replaced with a block fence.  Just so you don't think I feel all superior and stuff . . .

Posted by Emily Devenport at 4:42 PM