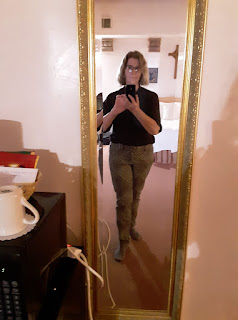 Economists have various indexes they like to use to gauge the health of the economy, but I'm a working-class gal, and I've got one that tells me more than any graph could: the Thrift Store Index. Basically, it's a measure of how many cute pairs of pants you can find in a group of thrift stores in any given year. It's a also a measure of how many of those thrift stores can continue to stay in business from one year to the next. Right now, that index isn't looking too good in New Mexico. 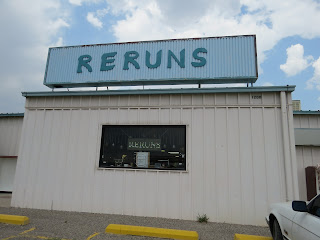 I'm a fiend for thrift store clothes, probably because I'm greedy. Why have a sensible, skinny closet that only contains what you need when you can have a fat, overstuffed closet that requires serious excavation in order to actually get at the clothing entombed therein? Is there any thrill that equals driving home with a trunk full of pretty new finds (for which you may have to buy new hangers)? All of this becomes even more silly when you reach the point in your life where you don't have as many places to actually wear that wonderful, hip stuff you just scored. I mean hell, once you're getting close to retirement, do you even need to change out of your sweat pants? 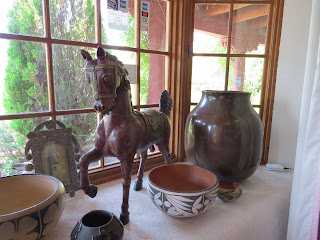 All of that is beside the point, however, because despite common sense, the heart wants what it wants, and this is the case even during a plague-induced recession -- possibly even more so when trends that you may have been seeing for several years in a row are clarified. In New Mexico, I've seen a steady decline in the economy for at least five years, while Arizona's economy has improved. Even the delightful Pie Town is losing customers. 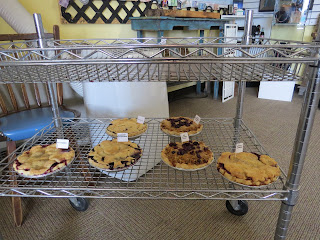 Arizona and New Mexico are next-door neighbors, but they're different in a few critical ways. Arizona has larger cities, including growing communities of tech workers lured away from California. Chunks of New Mexico are controlled by the Federal Government for very good and top-secret reasons, (even without Area 51), and those jobs pay pretty well, but most other people in New Mexico work service jobs or have small farms. The mining industry has pretty much left the state, and New Mexico's other claim to fame, it's art community, is struggling in the new century. Younger people don't tend to collect art, and older people are at the point in their lives where they're downsizing their households and trying to sell off the art and Indian jewelry they once collected with such enthusiasm. There are casinos in New Mexico, but they support various Indigenous communities and are dependent on traffic, which has slowed a lot in recent years. And the minimum wage in New Mexico is currently $7.50 an hour. It's due to go up starting in 2021, and that may help working-class people in New Mexico -- it certainly has in Arizona. But I suspect the art crowd has decided New Mexico is old news. They're the ones who were most likely to get tired of their pretty, expensive, hip clothing and donate it to thrift stores. That's how that trickles down, and that spigot is going dry. 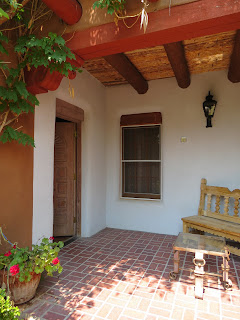 That leaves New Mexico with plenty of what it already had: tradition, culture, Indigenous communities, national and state parks, amazing geology, fabulous food, and serious tenacity. If the fat cats abandon the place, it has a chance to rediscover itself. I'll keep going there at least once a year. That says something. 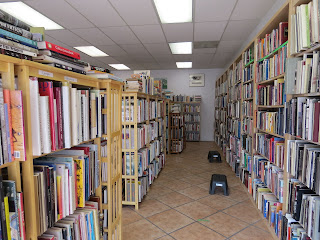 As for the thrift stores, New Mexico still has 'em, and you should still look for them. Also used book stores, little art galleries, amazing restaurants, and the Very Large Array of radio telescopes near Socorro.
Reruns is in Grants. I got the cute pants in the photo at the top of this post from the Habitat for Humanity thrift store in Espanola. The pretty horse and the shot of the gorgeous front door came from The Inn at the Delta in Espanola, and the yummy pies can be found at The Gatherin' Place Cafe in Pie Town. The book store is in Santa Fe, Books of Interest. 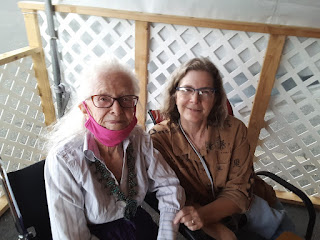 The photo of my mom and me was taken on the outdoor patio of Los Potrillos Restaurant. We celebrated her 99th birthday there. And the bull pictured below is from our delightful hotel in Santa Fe, the Silver Saddle Motel. 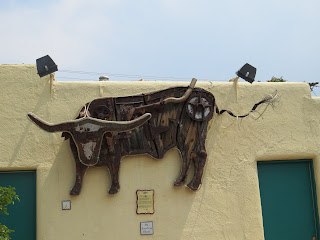 Posted by Emily Devenport at 4:39 PM