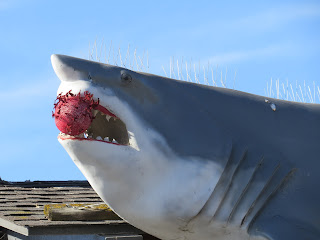 I try not to have too many expectations when I'm on road trips, because you've just got to let those happen to you if you're going to get the most out of them. This is especially true when I've got my 99-year-old mother in tow, since I have no idea how much longer she's going to be on this Earth with us. She actually did have some expectations – she thought we were going to New Mexico, since that's the trip she most often takes with us. She adapted to the idea of heading up the West Coast with my brother Michael, who drove us through some of his favorite places, past wildfires and Coronavirus hotspots. The plan was sketchy and spontaneous, but Michael has a genius for that kind of adventure. For the last 40 years or so, he has driven all over the country to craft fairs, selling the wooden drum boxes and playable wooden furniture he makes in his workshop in Flagstaff, Arizona.

Ernie and I spent the night before our departure staying at the workshop, and I'm enthralled with it. It's full of lumber and fabulous gizmos. 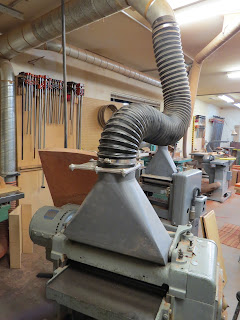 Michael is fourteen years older than me, and has spent much of his life working as a craftsman. He has also raised three children and put all of them through college (though they got some scholarships as well, because they're wunderkinds). The three older siblings in my family have been like parents to we three younger ones, but in the past forty years, that has been a distant relationship, because all of us have been working like fiends to make a living and tend to our families. So even though we've kept in touch often enough to have a general sense of what's going on with each other, we haven't truly gotten to know each other as adults until fairly recently. The catalyst that's brought us closer together is my mom. She's probably in the last year of her life. I'm her main caretaker, and my brothers and sisters have begun to circle the family wagons in order to ease things for Mom and to give me support as caretaker. Our trip up the West Coast was part of that.

I had never been up the legendary HWY 1 before, and I was thrilled about going. I especially liked the fact that we would be on the road during election week, which otherwise would have had me glued to the news, obsessing and worrying about the outcome. I don't think I've ever been more invested in an election, and maybe I never will be again (I can hope), and I really liked the idea of prowling beaches, forests, and thrift shops while all the brouhaha went on without me. And it mostly did -- I'll have more to say about that in a future installment. But that first night, I couldn't get enough of my brother's workshop. It looked so 1940s sci-fi. 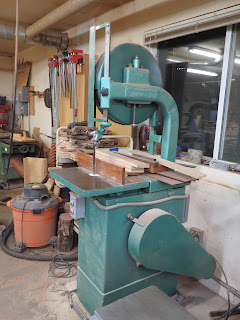 Michael sells a lot of his drums on his website these days, so business road trips may become less common for him in the next few years. COVID 19 has decimated the craft fair business, and it may take a few years for it to come back. Oddly, this disaster has made it easier for Michael to spend time with family, and that's why we were able to go on this election-avoiding pandemic road trip in the first place. It's an ill wind that blows no one any good. You can argue that this particular wind also blew a president out of office, and the fact that he orchestrated that disaster himself makes me feel even less inclined to look sideways at any bit of good luck that comes my way as a result. These are some of the things I contemplated as I stood outside my brother's workshop in Flagstaff, Arizona, and looked at the Milky Way at 6:00 a.m. on October 30, 2020. We had rented our car the night before, and I nick-named her Nevada, since that was the state that issued her license plate. She was a Chevy Malibu, quite spiffy and (we would discover) fuel-efficient. All we needed to do was pack and buy our morning lattes (Michael and Ernie both prefered their coffee black, but you get the general idea).

Bear claws would be de rigueur. We were about to become experts at packing that trunk, due to extra baggage acquired at many thrift shops along the way. 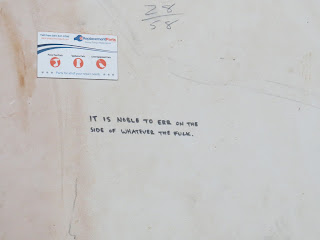 Posted by Emily Devenport at 10:40 AM