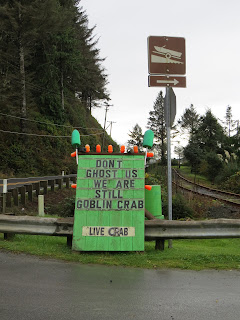 My husband Ernie is way better at chronicling trips than I am, because on top of taking lots of wacky photos with his phone he also takes notes. And draws cartoons. Plus when he blogs about our trips, he's a lot more succinct, combining several days into one post. Usually I do that too, but there's something about this trip that makes me want to be annoyingly detailed. Here is Ernie's first installment of our Pandemic Journey. 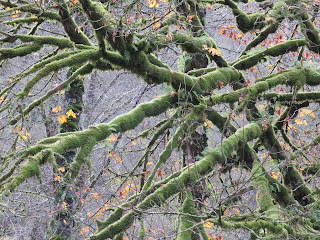 Our Journey North on Friday, Nov. 6 took us from Oregon to Washington, which surprised me.  After the long, long California coast, I wasn't used to states that are so short. I'm sure a lot of the states in the northeast would seem more like city states to me. 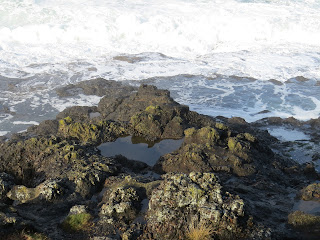 The farther north we drove, the wilder those shores got. They sort of tampered with the Zen metaphor of human lives being like waves on the shore -- the wave breaks, then returns to the ocean. But on the shores I saw, waves created inlets, estuaries, tidal pools. There's probably a Zen metaphor for that, but I'm a dabbler, not an expert. The notion of becoming a tidal pool once my wave has broken on the shore is quite alluring to me. 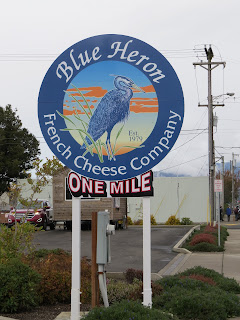 We were three days past the election by then, and the question was no longer whether Biden would win the election; the question was by how many ECs. CNN was pretty sure it would be 306. The nutty accusations were just beginning to pile up, but I give those swing-state officials credit. They followed procedure and made sure every vote got counted. I don't think most of us really understand just how dedicated election officials are to their jobs. They're heroes. As Ernie and I sat in our hotel rooms, eating Chinese or Mexican takeout, we were transfixed by these officials, Republican and Democrat, who did the right thing no matter how much they were threatened and hassled.

We admired them as we journeyed farther into the Land of Cheese. Also ice cream, if you're a fan of Tillamook. Not to be a goofus, but it hadn't occurred to me Tillamook was an actual town. 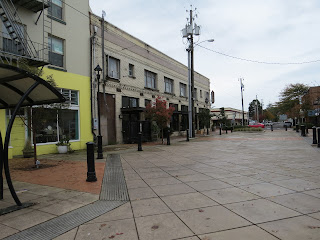 And quite a charming one. Earlier in the day we had visited an antique mall in Lincoln City (where, as you will see from my notes, I bought a barnacle), the Rocking Horse Mall. In Tillamook we found a thrift store that was much more stylin', Recurrent. 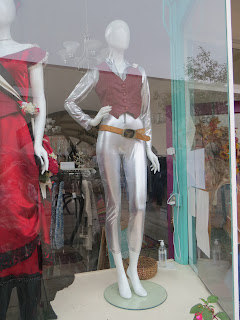 This was the other store that had the most elegant clothing I purchased on the trip. But that wasn't all. There was also a certain irresistible piggy pot that had to come home with me. 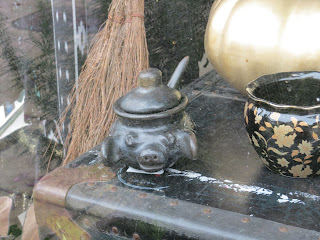 It's a good thing we didn't have our truck or Michael's van, or I might have felt tempted to get the gigantic vintage broiler. 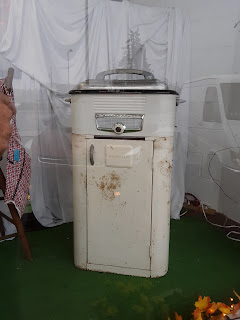 That left room for the loot we bought in Chinook, Washington, at Shipwreck Cove, which included a copy of one of my favorite books, Anna and the King of Siam. 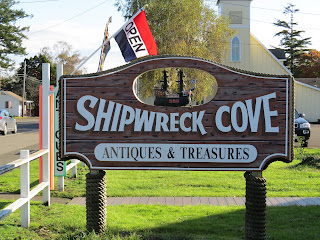 We ended up in Aberdeen, Washington, where my credit card statement details we got take-out from another Mazatlan Restaurant. So they may be a chain. 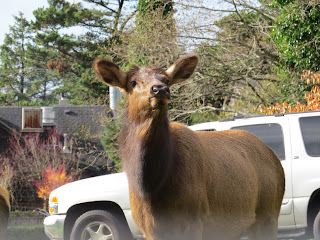 And, this being Oregon and Washington, we saw another herd of galumphs. And a town called Cosmopolis that really did not strike me as being terribly Cosmopo-licious. Granted -- I only got a quick glance.

We were almost at the top of the Washington Coast. One more day would get us there . . .

Posted by Emily Devenport at 7:22 PM

Email ThisBlogThis!Share to TwitterShare to FacebookShare to Pinterest
Labels: HWY 101, Oregon and Washington