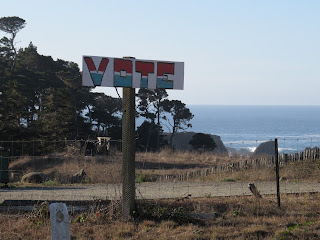 When I consult my email notes for Nov. 3, this is what I find:

Town of Walala no bathroom

Avenue of the Giants

And, dear god – the election 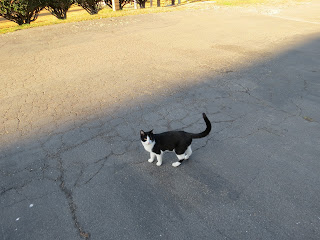 A quick search on Google informs me that Walala is actually Gualala, CA. I must have heard Michael say the name, and I just made Anglo assumptions. I don't blame Gualala for not having a bathroom readily available to people driving through. For one thing, there's a pandemic going on. For another, what picturesque little town wants to be a bathroom pit stop? It must be an ongoing issue however, because we began to notice that a lot of the little towns had Port-a-Potties on their main streets. A civilized gesture, in my opinion.

As for the Manchester Fire Department, it must have been a beautiful old building, or I wouldn't have made a note of it, but apparently I didn't get a photo of it, and a cursory search on Google Images doesn't turn up a pretty pic. So I'll leave that as a mystery to explore in the future. It gives me an excuse to go back, right? 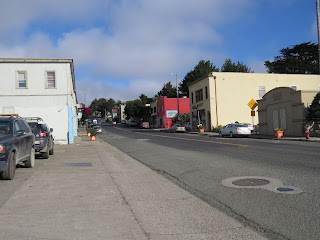 The photo above is pretty typical of the main streets of the little towns we passed through on November 3rd. When we got to Fort Bragg, we found the Paul Bunyan Thrift Shop, and apparently there was a one-eyed wiener dog tied out front, but alas, I didn't get a picture of him. I can state with confidence that we got plenty of goodies in the thrift shop however, because that was the case in every single thrift shop we visited. I am far too good at finding stuff I want to buy. In my defense, I had packed light with just that possibility in mind, and the few things we had brought along were starting to get grubby. We had yet to stay in a hotel with a laundromat, so we improvised. That's my story and I'm sticking to it.

Thrift stores, fire departments, and one-eyed wiener dogs notwithstanding, this was a trip up the coast, and the ocean (along with estuaries, inlets, and river and stream outlets) was the main point of this part of the trip, so we continually stopped to ogle interesting shoreline geology. 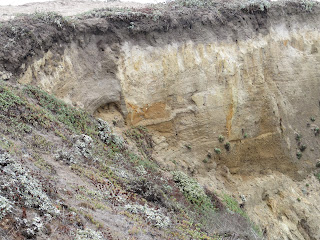 The palm trees growing on those wave-lashed rocks are some of the toughest plants I've ever seen. 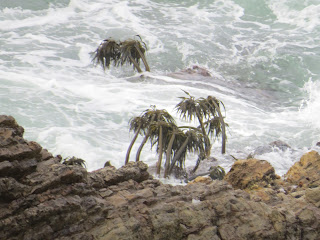 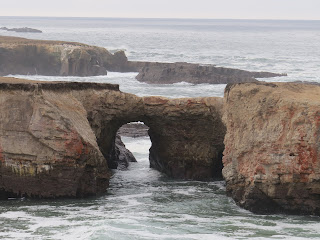 But the shore was only half the attraction along that part of the Coast Highway, because eventually we made our way up to the Avenue of the Giants. I took a bunch of photos of those giant sequoias, but I don't have the skill to capture the quality of the light in those forests. My digital camera overcorrected in the gloom and made everything look too bright. Still, the shapes were interesting. And we did see some fun carvings. 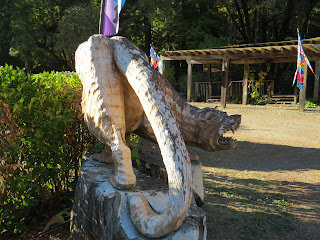 We settled in Garberville for the evening, next to the Humboldt Bar & Grill (which is a Mexican Food joint) across from an excellent thrift shop, The Garberville Thrift Shop, where I managed to get the most elegant articles of clothing I bought on the whole trip (and in the past year, actually). Michael bought a fishing pole. 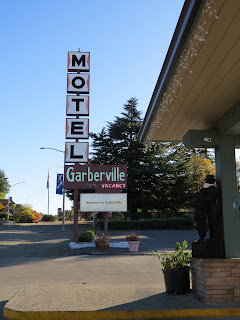 It had been a day of wonders. I feel grateful we were on the road, prowling along a fascinating coast on a highway that took us through charming towns. We stayed occupied the whole day, so we missed all the not-news you always see on election day, all the speculation that you get in place of actual information about how things are going. By the time Ernie and I tuned in to CNN, stuff was actually happening.

It was the kind of stuff that makes you pull your hair out. Mike's confidence evaporated under the onslaught of no-one-winning-in-a-landslide. I found the AP website on my laptop and kept refreshing it, hoping to see a clear victory for Biden looming in the search fields. Instead, he seemed to be far behind in most of the swing states.

However, the people on CNN saw it differently. They had information from each precinct, and an understanding of how each city would report results. They remembered who tallied early votes and mail-in votes first, and who did it last. And they never talked about Trump having a better chance of winning. He was behind in the Electoral College the night of the election, and he never got ahead. Biden was the one with a better path, and one of the things that proved that was when Arizona was called for Biden early on.

No wonder Trump got so mad when that happened. It was the bellwether. It was the reason I was able to tune out around 10 p.m. (back to the Murder Channel, because somehow that was more soothing) and get to sleep that night.  I found out the next day that none of my brothers were able to sleep that night. They all stayed up until the wee hours of the morning, and each of them finally gave up just before they would have discovered that Biden was kicking ass in the swing states, thanks to those mail-in ballots.

Before Ernie and I went to sleep, we had a little talk. "He could win again," I warned. "I'm been trying to think about how I'm going to cope with that, and the only plan I can come up with is to turn off the news for the next four years. When I log on to Facebook and Twitter, I'm only going to stay long enough to post a few things, I'm not going to read anyone else's posts, because I can't handle the doom. And when I can face it, I'm going to find some way to join a legal resistance. Because it's going to get ugly. That SOB is going to take vengeance on all his enemies, and no one in the government is going to be able to stand up to him."

"Yep," Ernie agreed. (He actually said more than that, but that was the gist of it.)

Comforted, we went to sleep, unlike my poor brothers.

When we got up in the morning, the future was so bright we had to wear shades. 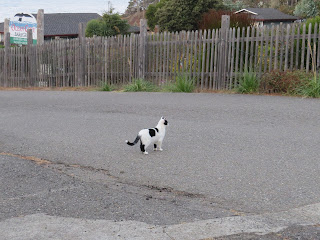 The kitty pictured above is one of two hotel felines who live at the Ocean Cove Lodge in Jenner, CA.
Posted by Emily Devenport at 7:45 PM