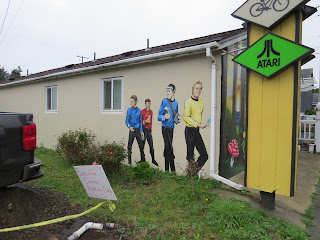 When I look at my email notes about the road trip, they mostly make sense -- except for "Coal back slough." Maybe that was a sign I saw by the road.

Reedsport gateway to the dunes

According to Google Maps, we got our morning coffee at Dutch Bros. in Brookings, Oregon. "They ought to call it Dutch Sisters," Michael said, because every single barista we had seen working for the Dutch Co. so far had been a gal. And I have to say, their coffee is WAY better than Starbucks (though Starbucks does make good packaged coffee). During our two-week trip, the best coffee we got was from Dutch Bros. And Wildflower. 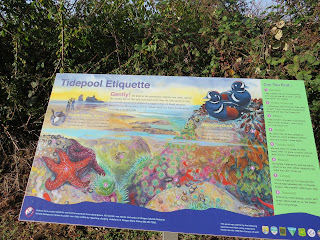 We were still on the Relentless March North part of our trip. Michael was familiar will all of the beaches and hikes along HWY 101, and there were details he wanted us to notice, like the wild blackberries and raspberries. 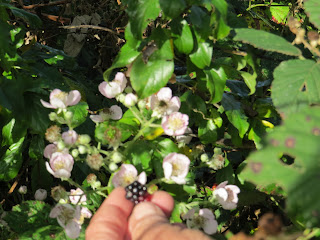 We nibbled a few of those along the way and photographed trees, and driftwood, and tiny waterfalls. The weather was gorgeous in a way that makes it really plain why people tend to flock to the West Coast. According to my credit card receipts we shopped at one thrift store and one antique store (the Purple Pelican in Florence). We had to stop at Misty Meadows Jams in Bandon, so Michael could get preserves for his wife. So of course Ernie and I had to get shortbread, honey, and god knows what else. 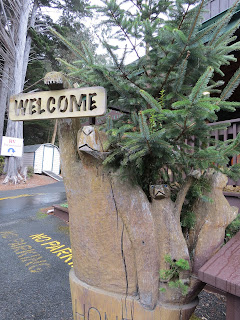 Port Orford probably would not appreciate me calling them "the town that time forgot," but they struck me that way, especially when I looked at this semi-ruined structure that still managed to look picturesque. They were one of the towns that had a port-a-pottie on the main drag, which scored a lot of points with me. 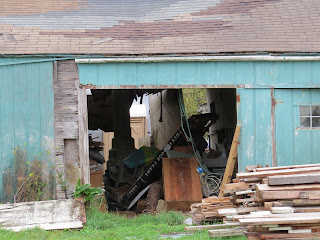 I was still compulsively checking Google News with the keywords "election results 2020," every half hour or so, when I could get online. I did that every single day for the rest of the trip.

But on November 5 we were less than halfway through our trip, with nine days still to go, and I was starting to feel like an expert at being on vacation. My team had just won the election, and I was flying high. I had never been to Oregon, and I had to admit, they really are good at coffee. HWY 101 beckoned, and along the way I noticed some things. Like someone made a fence out of buoys. 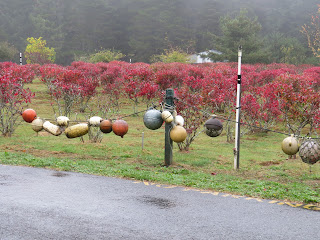 And these trees all seem to be pointing at something in particular. 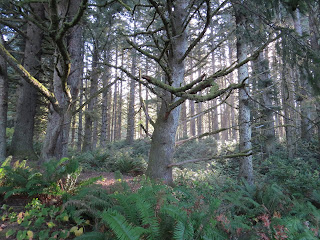 Shop cats are a thing, no matter where you go in the world. 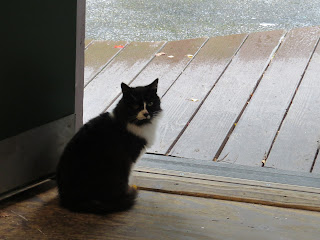 I finally got a photo of one of those pretty houses. 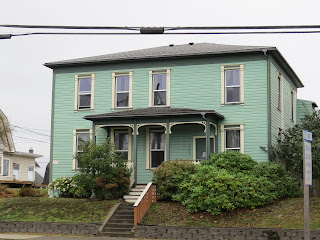 I thought the shark was cool, and then the chicken showed up. 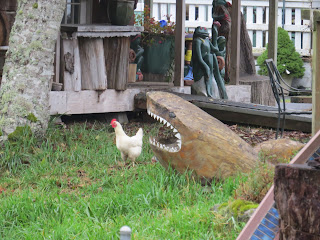 We never saw any whales in the ocean, but we saw plenty of carved ones. 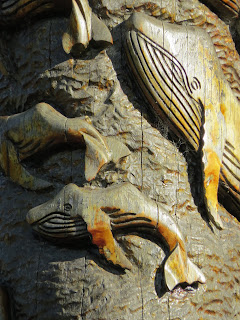 We settled for the night in Newport. Just about every night of the trip we ate either Chinese or Mexican food -- that night it was fare from Mazatlan Mexican Restaurant. Mom and Michael stuck to their peach-wine-and-MSNBC habits; Ernie and I went for CNN. We didn't need the Murder Channel Anymore. It was too satisfying watching those vote margins persist. 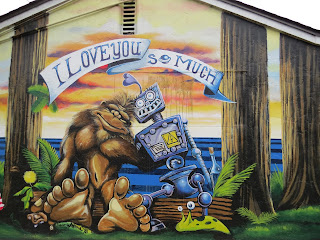 The next day we would look for Dutch Sisters again. Ahead lay the Land of Cheese . . .
Posted by Emily Devenport at 7:38 PM