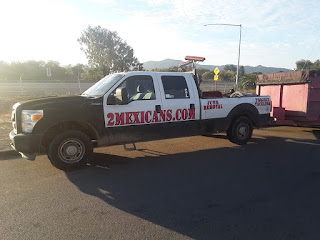 Saturday morning we drove through Boron and saw the Borax plant and a bunch of houses where employees probably live. Michael wanted to take us on the most interesting drive he could think of on our way to the coast, so geological wonders were heavily favored. And since it was California, vineyards and other fruits could be seen growing on either side of the road. The drive took us 4 1/2 hours, but we enjoyed it, so it didn't feel that long. As we drove into San Luis Obispo, we saw our first caravan of Trump supporters, their American flags shredding in the wind as they paraded down the highway. I suspect they were hoping for honks from kindred spirits. Most people just ignored them.

San Luis Obispo was founded in 1772. The Chumash were there long before that, and had a marine culture, taking advantage of the estuaries that came further inland at that time. The Spaniards showed up and founded a mission, and eventually the land was cobbled up into ranchos (land grants). It's got a lot of historic buildings, a lot of cool thrift shops, and a university. My brother David says it has the charm of Santa Barbara, which is probably why it tends to be a bit pricey, which is also why the thrift shops are so well-stocked. The climate is gorgeous.

Once we had checked into our hotel, we went prowling for thrift stores. Michael should probably be a tour guide, because he knew all of the good ones in town. However, this being plague times, we saw long lines to get into some of the stores. We only hit two: Assistance League of San Luis Obispo and Achievement House, where we scored some pretty clothing. After that, we hit Tonita's Mexican Food for take-out. 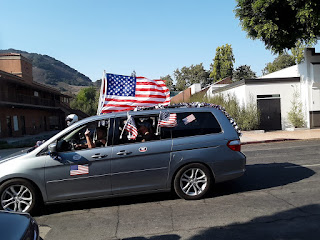 On the charming streets of SLO, the Trump caravans paraded, in search of supporters, or maybe just to intimidate people. They were flipped off for their trouble. Next to their wind-shredded American flags we saw a lot of Trump/Pence banners, but some also sported the black version of the American flag that represents white supremacists, a message that was not appreciated in liberal and Hispanic SLO.

Back at the hotel, Michael and Mom switched to peach wine and continued to watch MSNBC, laughing at the antics of Trump and feeling confident of his defeat. Ernie and I stuck to the Murder Channel. We didn't want to jinx it. We were about to begin the most enchanting phase of our trip. And we were going to need it . . . 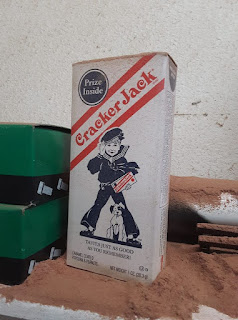 Posted by Emily Devenport at 6:34 PM