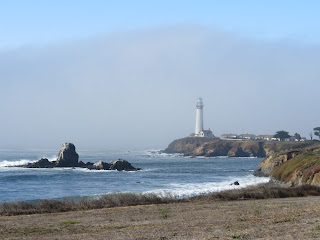 As I write this, my mom has suffered another decline and is now having trouble speaking, feeding herself, and drinking without help. She's still cheerful, still enjoying visits from family, and today (with my help) she ate half an enchilada with gusto. It makes me very glad we did this trip with her. If we had waited, she couldn't have gone.

The trip was challenging for her, but she did well enough that I dared to hope we could eventually take her to New Mexico for her 100th birthday in July. Now I know that won't happen, but in early November she guzzled wine with my brother every night, ate take-out with excellent appetite, and watched MSNBC avidly, waiting for the moment when Trump would be voted out. I tried not to worry about disappointing her.  I was pretty sure that this trip and the chance to vote Trump out of office were the two things keeping her invested in life at that point. 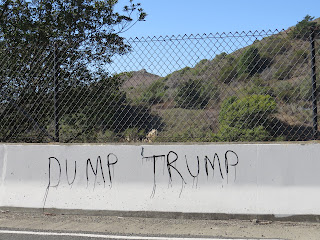 The election would occur the following day. Mike's confidence was starting to erode a bit, but I felt less nervous this year than I had in 2020. In 2016, I knew what a bad candidate Hilary Clinton was. It didn't matter that Donald Trump was also a bad candidate; his base was enthusiastic. Ours was Meh. Ours was uninvested and overconfident. The rest is history.

This time, we had a fighting chance. My estimate for Biden's margin of victory turned out to be dead on. So yay me. And on November 2nd, we were at the beginning of a wonderful road trip up HWY 1, heading for the Intersect with 101, which would eventually take us across the Golden Gate Bridge and through the outskirts of San Francisco, past beautiful old row houses and up the hills winding along the coast.

On the way, these were some of the things I sent myself emails about:

Pacifica, where people went down to the the beach to watch a tsunami (according to Michael)

Stinson Beach: NOBODY FOR PRESIDENT graffiti

Estuaries (I had never seen one before.) 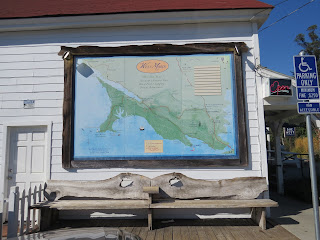 I was surprised how much the small towns along the California coast highway reminded me of the small towns in New Mexico, which also lie along highways that wind through hills and mountains. Each town has its own quirky character. Some are working communities; some are charming tourist towns. 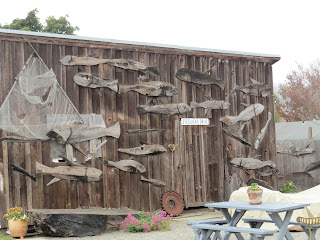 I had visited San Francisco over 30 years ago, to attend the ABA convention (back when there was such a thing), but this was my first drive across the Golden Gate Bridge. Michael told me that the bridge is constantly being painted -- by the time workers finish the whole thing, they start over again. 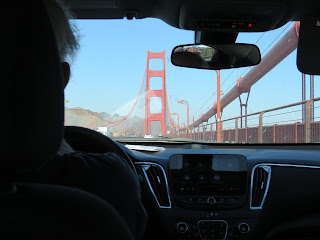 I love the old homes in those small towns. Some of them are very old, like the row houses in San Francisco. I hate the cheap, slapped-together ticky-tackies that pass for homes these days. And I really enjoyed looking at the variety of American house styles I saw in the small towns we passed through. 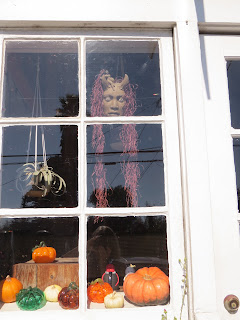 We even saw a few yokai. 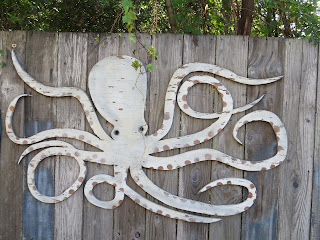 And plenty of octopuses. 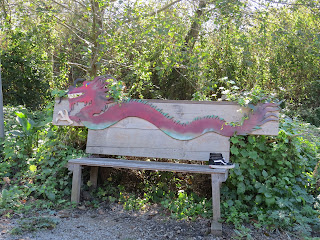 And a dragon who seems to have eaten a guy and then barfed up his shoe. We drove 167 miles (according to Google Maps), and then settled for the night at the Ocean Cove Lodge. 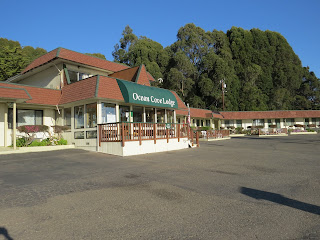 After getting yummy (if somewhat overpriced) burgers at a resort restaurant that my credit card bill identifies as Coast Kitchen, Ernie and I settled in for an evening of the Murder Channel. The Inversion layer settled over our view of the ocean. Early the next morning we would see Orion in the sky, despite misty conditions. The Day of Reckoning was at hand.  I'm really glad I already know how it turned out . . .
Posted by Emily Devenport at 8:26 PM