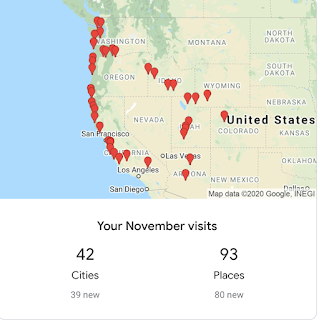 "Why is there a Barstow?” I asked my brother as we drove west on I-40.

“It's halfway between Las Vegas and L.A.?” he guessed. “And the train runs through there.”

He mentioned that there was a military supply station in the area too, which is not a bad reason to build a town nearby.

The terrain was shaped by volcanic activity, and there are lava flows that can be seen from the Interstate, so I wondered – could mining have been a factor? A quick online search revealed that Barstow was founded in 1880, when there was a silver-mining rush. It also marks a junction of pioneer trails. It was named Fishpond originally, and then Waterman Junction, but was renamed to honor William Barstow Strong, who was president of the Santa Fe railway, so Michael's guess about railroads wasn't far off.

After mining declined, Barstow continued because it had diesel repair shops and was considered to be a tourist stop (so yeah, halfway between Las Vegas and L.A.).

One thing none of us suspected is that in 1958 the Goldstone Tracking Station (now called the Goldstone Deep Space Communications Complex), used to communicate with spacecraft and satellites, was established in the locality. And Barstow has a Community College (founded in 1960), which is no small potatoes.

So Barstow – kind of cool. My desert soul likes the place, and it may deserve more exploration, but we were moving on in the morning. Maybe we'll go back some day.

This is neither here nor there, but the hotel in Barstow was one of two on our journey that had elevators. The rest of our hotels were more along the lines of the old-fashioned motor lodge. I'm particularly fond of motor lodges, not necessarily for any good reason -- they're the sort of hotel I stayed in as a kid when my mom hauled us along on road trips. She's the one who taught me to love the road. I'm even fond of the plastic cups and the ice buckets in motel rooms, not to mention the TV, and the bed I'm not responsible for making. As soon as we checked in (observing strict COVID 19 protocols in the lobby) I turned on Forensic Files, determined to avoid any news coverage of the upcoming election. Mom and Michael had no such compunctions -- they turned on MSNBC and poured themselves some wine. Mike was feasting on overconfidence. He was sure Trump would get thoroughly thrashed.

I was not so sure, though I felt better about Biden's chances than I had about Clinton's. I told Ernie that I thought it might come out with 51% to 52% of the vote for Biden, 46% to 48% of the vote for Trump, but that didn't mean Biden would win the Electoral College. As it stands now, Biden got more than 7 million more votes that Trump did, but it was still a close call with the EC. That sucks, big time, but it's way better than four more years of Unrelenting Doom, so I guess I'll take it.

We had yet to cross that bridge however, and the future still looked uncertain, so I kept the channel tuned to Absolutely Anything But. Michael came to pick us up so we could raid the local Panda Express and took one look at the TV. "You're watching the Murder Channel!" he observed, which was only fair.

One thing about Panda Express: it reminded me that I really like Chinese noodles and cabbage.

We had only one mishap on the road, and it involved Michael's Lucky Fish. The Fortunate Piscis is a plushie that Michael likes to put on the dashboard of whatever vehicle he's hauling across country. Unfortunately, Mom took an immediate disliking to the plushie. "I hate that fish!" she said, several times, with enough passion to cause Mike to relegate poor piscis to the cavern under his seat. Goodness only knows how that handicapped our luck on the trip, but we never had a flat or ran out of gas, so I guess we benefited from some residual good luck.

The next day we would end up in San Luis Obispo, crossing paths with several pro-Trump car caravans, many of which flew the blackened version of the American flag that serves as a symbol for American white supremacists. California is a deeply blue state, but we were about to discover that things are a little more complicated than that . . . 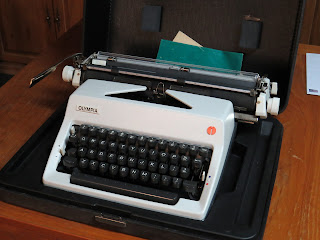 Posted by Emily Devenport at 2:25 PM