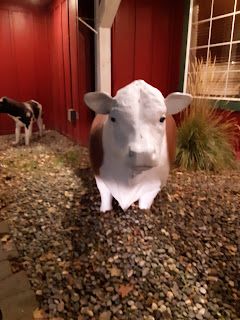 About midway through the day on November 8, we stopped at a 7-11 to hit the bathrooms, and when Ernie and I came out again we discovered that my brother Michael had driven off without us. At that moment, I blessed the fact that we all had cell phones. I called Michael.

He answered, wondering why the heck I would call him from the back seat, especially when he had been right in the middle of telling me a really long, involved story. He had wondered why we had been so quiet back there.

This was particularly ironic because when Michael was a kid, my mother and my aunt had driven off without him on an overnight journey, leaving him at a gas station in Blythe, California. It being the 1960s, no one had a cell phone (except maybe for spies in James Bond movies), so the owner of the gas station had to call the highway patrol, and they chased my mother down. 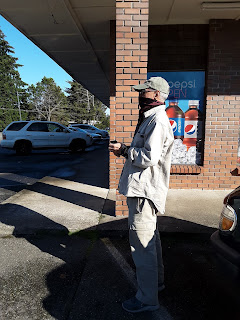 No law enforcement had to be recruited this time around. Having been convinced that the back seat of the Malibu was, indeed, empty, Michael came back and got us. It was a successful maneuver in a day full of them, starting with our coffee and pastry acquisitions at Lincoln Street Coffee Pot and Sasquatch Donuts. Somehow I managed to juggle my 16 oz cup and a bear claw (one assumes) and type baffling email notes:

I'm not sure exactly what I meant when I typed "Coffee, Mexican food," etc. with my fat paw, but I think it was my general impression of Washington and Oregon, at least along those particular highways on that particular trip. It's not a bad summation. We didn't do any yoga ourselves, but we saw a lot of signs advertising it. Who knows, maybe yoga studios have proliferated in every American city. God knows we could use it. In the meantime, here are some cute ducks from Port Angeles. 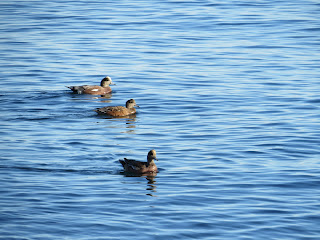 Michael had been checking weather reports, mindful of the fact that our Chevy Malibu had tires that were fairly new, but made for the desert roads of Nevada, not for blizzard conditions. So he decided to aim us back toward Oregon, with plenty of scenic attractions on the way. One thing he wanted to make sure we did was see some beautiful totems. 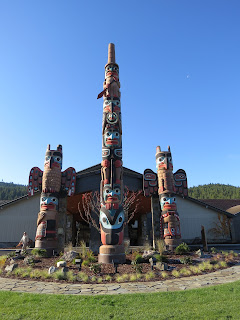 I wish these photos could convey even a fraction of the majesty of these carvings. Ernie says that totem poles have the same density of information that you find in Meso-American carvings. They also remind me of carvings from Oceana. 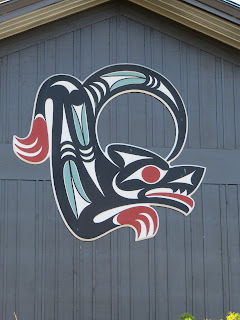 If I were going to be accurate while summing up Washington and Oregon with email notes, I probably should have added "volcanic deposits." We saw the Columbia River basalts, the results of titanic rift eruptions 17 to 15 million years ago. Michael gazed longingly at favorite fishing spots (many of which he pointed out to us on the way). 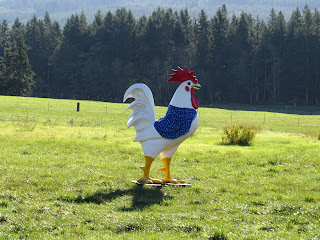 He also wanted to make sure I photographed the giant chicken.

I still took time to compulsively Google "election results 2020." At this point, I was checking the status of the Presidential Hissy Fit. I understood why Republican voters were disappointed -- I had felt the same way in 2016. I had no desire to gloat about the situation. Hell, I didn't even want to gloat to Trump. Anyone who's ever divorced an abusive husband will tell you that's not a good idea. 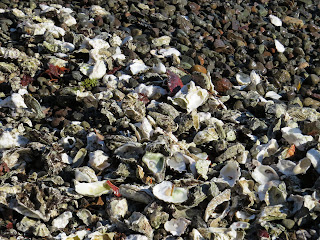 The gorgeous (and gorge-ous) scenery helped me celebrate the triumph of an election system that withstood historic turnout in difficult circumstances. It also reminded me why I love my country, for its brave election officials, its natural beauty, and Indigenous cultures, and Sasquatch, Mexican food, even yoga. 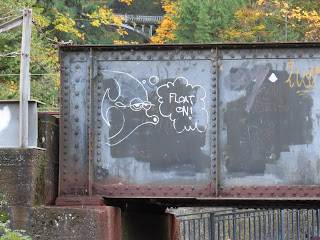 Michael wanted me to photograph Multnomah Falls on the Columbia River Gorge, but I felt equally fascinated by the graffiti on the walking bridge. But okay -- here's the waterfall. 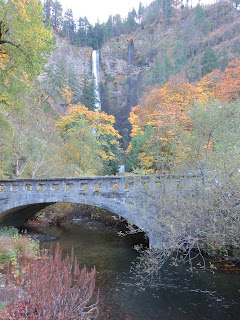 We stopped for the night in a town called The Dalles, and the way it was pronounced was almost like "Dallas" if you weren't listening closely. We ate supper at Cousins Restaurant, and I'll be hanged if I can remember what we had, but I'm reasonably certain it wasn't Chinese food. The cow from the top of this post is from the exterior of that restaurant. 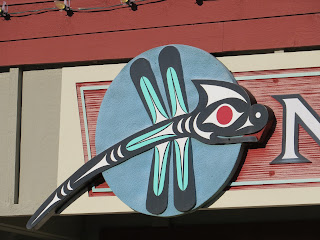 I'm thinking burgers.
We dodged the blizzard. The next day we would end up in Idaho. The dash was just beginning.

Posted by Emily Devenport at 6:06 PM