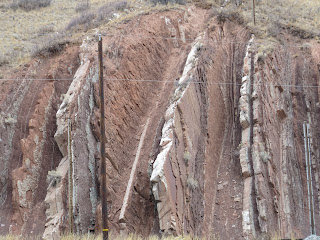 I took a lot of pictures on Nov 10, partly thanks to some amazing volcanic deposits that form the Snake River Canyon. Apparently the spot we visited was also famous because Evil Knievel jumped over it with his motorcycle -- I seem to recall that happening back in the 70s.

I can tell by my email notes that I was kind of sick of taking email notes. Or maybe the distance between towns was growing wider: 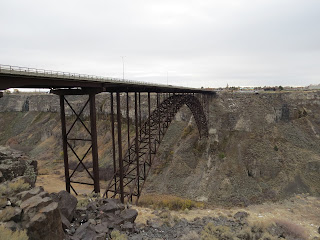 Dutch Bros. provided morning coffee as usual, and soon we were on the road, looking for the bridge over the Snake River. I snapped a lot of photos, but I didn't realize someone was hang gliding over the canyon until they had come to a safe landing. 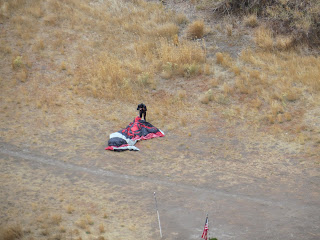 Michael had finally conceded to the cooler weather and put on a long-sleeve tee. He was fascinated with the underside of the bridge, where large voids from gas in the magma were exposed. 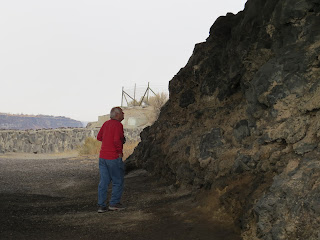 I can never resist the underside of bridges. 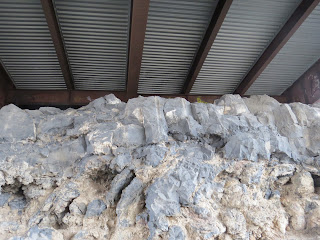 Because we were driving on I-84 and I-80, we managed to visit 3 states in one day, Idaho, Utah, and Wyoming. I knew when we had entered Utah because we began to see fantastically tilted strata. Much as I love my home state of Arizona, I don't think any other state can compete with Utah for fantastic landscapes. There's a reason so many movies set on Mars are filmed there. I suspect this bit of folded strata reveals the roots of mountains that were deeply buried when they were deformed by regional stresses. 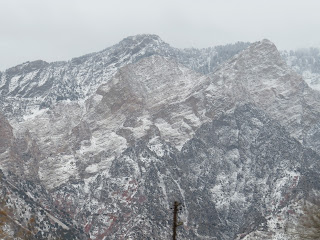 Michael introduced me to a Utah thrift chain that gives Goodwill Industries a serious run for its money, Deseret Industries. 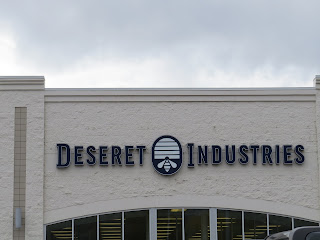 I love that the state symbol for Utah is the bee hive. As we continued along I-80, Michael demonstrated the tilt of the strata we were passing through just as I was trying to photograph a particularly dramatic scene up ahead, causing me to miss it, but it kind of worked out for the purposes of telling this story. Besides, what do you expect when you snap pictures from inside a car like a lazy bum? You're supposed to pull over, get out and brave the weather and the traffic. Though if we had done that for every good shot on this trip, it would have taken us about 5 times longer. 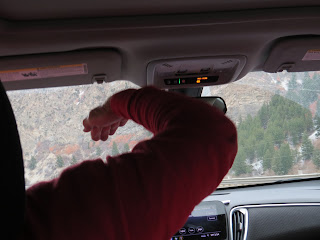 Eventually we saw some beds that had been turned on their sides, tilted 90 degrees. 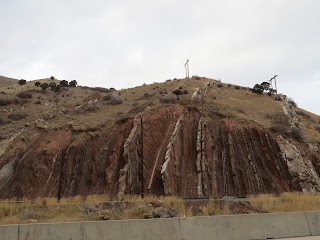 Utah also has a lot of thick sandstone deposits, from dune systems that extended throughout the Colorado Plateau. These deposits have weathered into landforms, from the whimsical to the majestic. 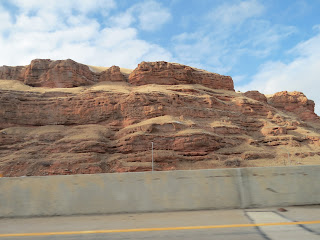 Some of those sandstone deposits end up looking like battleships. 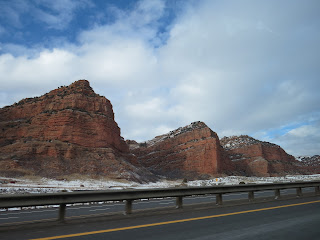 True, the shapes can be fantastical, but the colors are even better. 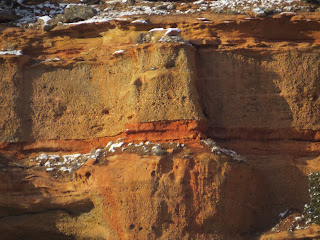 As we rolled out of Utah and into Wyoming, I thought about the supervolcano far to the North, one of the few features on Earth amazing enough to give Grand Canyon a run for its money, Yellowstone. Most of the world's geysers are located there. My mom took us there when we were in grade school, and it was like visiting another planet. It even had its own atmosphere (with a lot of sulphur in it).

We settled for the night in Evanston, Wyoming. According to my credit card receipts, we had supper at another Costa Vida. Ernie and I were beginning to tire of Trump's pathological denial of his election loss, so we found other TV channels to watch, variations of the Murder Channel (which still seemed more soothing).

We had been on the road for 9 hours that day, a very different approach to the first half of our trip, during which we meandered a lot more. We were running out of time if we still wanted to get back to Flagstaff by Friday the 13th. I had a feeling the most interesting part of the trip was probably over. But I was dead wrong.

Posted by Emily Devenport at 6:46 PM

Email ThisBlogThis!Share to TwitterShare to FacebookShare to Pinterest
Labels: Deseret Industries, I-80, I-84, Snake River Canyon