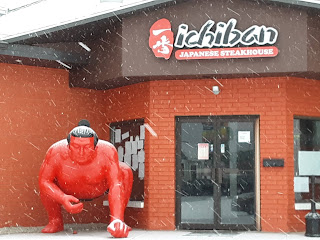 According to my credit card statement, the morning of November 11 we had coffee at the Caffeinated Cowboy in Evanston, Wyoming, a little drive-up joint of the same general ilk as Dutch Bros. Across the way, this red sumo crouched in the snow. He may have been an omen.

Michael had been leery of the lightweight tires on the Malibu when we rented it. The sumo in the snow gave him pause. He decided we'd better get going before it really started coming down. Soon we were packed up and on the road, but we moved cautiously. Michael had no illusions about how those tires were going to handle an icy road.

Unfortunately, many of the motorists speeding past us had illusions to spare. In short order, we saw them by the side of the road, spun out and wrecked. We tip-toed past them, thinking we had dodged a bullet. And then this happened. 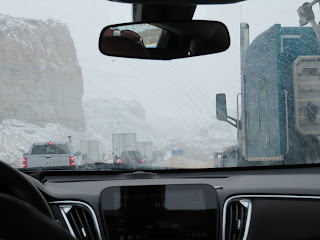 I-80 turned into a parking lot, because there was a tunnel up ahead. Apparently it's pretty common for motorists to go speeding into that tunnel and hit the black ice that tends to form in there. They wipe out and block the tunnel. We sat for an hour and a half while they cleared the road. By the time we got rolling again, I really needed to find a bathroom. We made a beeline to the facilities. I took a phone pic and sent it to my Facebook friends. 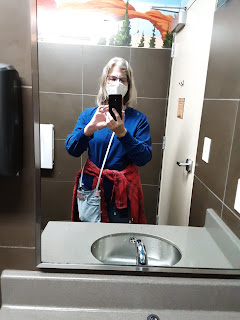 I felt like I had been saved by civilization. Outside, the Malibu had collected some icicles. 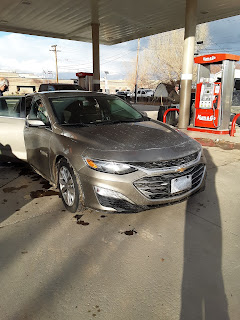 We still had to drive through snow flurries. Yet my mom decided she wanted ice cream. 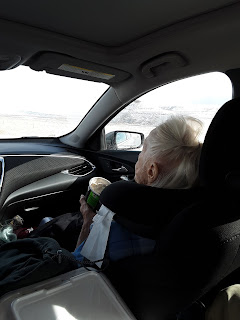 My email notes were a tad uninspired:

I took a lot of photographs -- once again, from the car, often with the window closed, which means that quite a few of them were blurry and splotched. But not all of them. 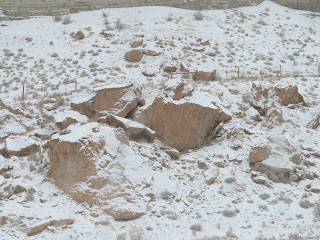 I couldn't get out a look at the formations up close, so I had to guess at their composition. I thought they were probably sedimentary, maybe mudstone and sandstone. But there are volcanic rocks that can look similar to sandstone, limestone, etc. Ash deposits in particular can look sedimentary. After all they are clastic. They can end up settling into drifts like snow. 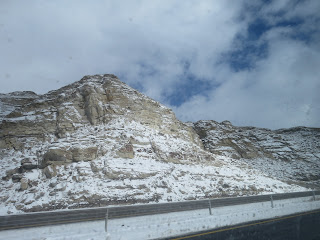 Our route seemed counter-intuitive. By Friday we wanted to be back in Flagstaff, yet we were headed in the opposite direction. Michael had a town in Colorado he wanted us to see, with a beautiful canyon nearby, so first we went east, and then we went south. By the time we crossed the border into Colorado, we were on HWY 13. On our way south, we saw some very fluffy sheep. 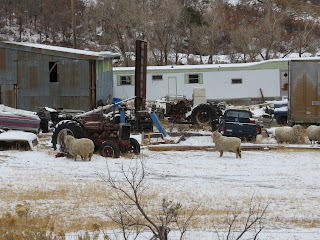 Our destination for the night was Glenwood Springs, a bedroom community for the exceptionally chi-chi Aspen. We had been on the road 9 1/2 hours, partly because we had been stranded for so long and partly because Michael moderated our speed to match the road conditions. We had supper at a restaurant called Tequila's. Then we settled into our warm and toasty hotel rooms. Ernie and I watched various Murder Channels. Mom and Michael drank their peach wine and watched the mayhem on MSNBC. We didn't know it, but Mom was going through changes. She had accomplished one thing that was keeping her alive: voting Trump out of office. She would soon reach the end of the other -- this road trip.

Michael was saying a lot of things to her that he needed to say. Here's his account of an unexpected conversation that occurred in the middle of the night on the 10th:

"Well, you see, no one wants to help me." She pivots slightly, peering through the dark in the general direction of the bathroom.

"Well, would you prefer to walk or to ride in your chair?"

She weighs the question. "I don't see why we shouldn't walk. What does the driver think?"

"He's not paid to think, Mom. He's here at you disposal."

I take her arm and off we go toward the biffy. It is a slow walk through the dark but the driver knows where he's going. When we reach the sink and mirror area just outside the bathroom I flick the switch for that light and what seems like one hundred fifty watts suddenly showers us, causing her to wince and squint in response.

She asks, "Do we need the interrogation light?" I quickly reach around the wall and turn on the bathroom light which, with its perhaps one hundred less watts, throws out a warmer, gentler wash. I quickly kill the powder room light.

"You need a hand perching on that throne?"

"No, I think I've got that part." I retreat around the corner a respectable distance.

I've heard mixed stories from Em and Ern regarding her middle of the night forays and lucidity. She arose only twice during the Coast trip and for the most part, "all hands on board" both times. For the most part she slept like a brick until seven a.m. (give or take).

Whether or not she ate the pastry we brought her (about 60 - 40 on that one) she proved to be an absolute coffee lush - sixteen (and, on occasion, even twenty) ounces at a pop. No matter how hot, she dispatched the coffee shack brew we fetched her each morning in short order. Extremely short order. I refuse to drink coffee that hot. I couldn't remember from one day to the next what the hell concoction they were buying her - hell, to me, coffee is nothing other than black water, an oil slick and bubbles - so one or both of them had to go along to order it. 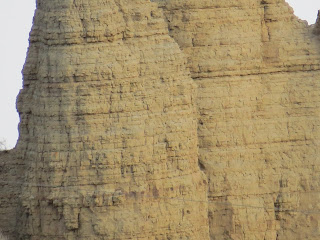 Em here again: As of this writing, my mom can no longer walk anywhere, let alone to the bathroom. She can't even sit in her wheelchair anymore. She's locked inside herself more often than not these days, and she seems to cycle between that unhappy silence and brief periods of being more like herself, followed by long bouts of sleep (22 to 23 hours). It's not impossible that she'll live to see the New Year, but I check to see if she's still breathing dozens of times per day.

Yeah, we went on this trip just in time. On the 11th, we survived a snowstorm pileup. The next day we were in for an unexpected treat.

Posted by Emily Devenport at 7:28 PM

Email ThisBlogThis!Share to TwitterShare to FacebookShare to Pinterest
Labels: Colorado, HWY 13, I-80, Wyoming