My Dad The Time-Traveling War Hero 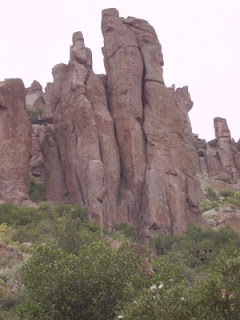 When I was about 8, I got caught in a really big lie, one so ridiculous there’s no way anyone would possibly have believed it – except me. It was a lie about my dad, and in my own defense, I have to say I told it because of something I honestly did not understand. And I don’t blame my mom for this fact, even though it was partly because she hadn't told me that she and my dad were divorced. My dad was in the Air Force, he was stationed in Viet Nam, so when I asked where he was, she always told me he was away fighting the war. What she didn’t realize was that I was too young to understand that the war was in Viet Nam. The war I saw on TV every day was the one in the movies, WWII. It was WWI, as well, but I figured it was the same difference. I loved those old movies, and I did not completely understand that they were about the past; in my mind, the 20s, 30s, 40s, and 50s all blended with the present. The past was incomprehensible if it was more than a few years old, so I decided it must all be happening now.
If I had been the kind of kid who watched the news, I might have heard about the war in Viet Nam, but my favorite show was The Time Tunnel. It fed my delusion that the past and present were really the same thing. So one day in school, as we were trooping through a section on WWII in our history books, I pointed to a picture in the book of a fighter plane and informed the class, "My dad flies an airplane just like that! He’s in the war!"
The boys in the class immediately caught my mistake, they pointed out that current fighter pilots flew jets. But to me, a fighter plane was a fighter plane, I didn’t see the point arguing about props versus jet engines. And to make matters worse, I insisted that Dad was still fighting WWII, because that was the only war I knew anything about. So when the boys pointed out that WWII had been over for 20 years, and the gap in my logic became really apparent, I felt the need to fill it with an explanation. "My dad is part of a special force," I said, "they’ve gone back in time to fight the Nazis – because the Nazis figured out how to use the Time Tunnel! They’re using it to steal the plans for the atomic bomb so they won’t lose the war! And my dad is going to stop them!"
Nobody bought that story, and that really ticked me off. Even if it wasn’t true, they could have given me the benefit of the doubt, right? Could they be absolutely positive the Nazis weren’t engaged in time travel experiments? No they could not! And furthermore, attitudes like that just get you eaten when the monster really does come oozing out of the vents at the movie theater. That’s been proven a thousand times over, at least in the movies.
I gave up trying to convince people that my dad was a time-traveling Nazi-thwarter. After a while, I forgot that I had ever told that story – until I read a book by Dean Koontz titled Lightning. I got halfway through that book, realized the good guy was German, then understood exactly what was going on. Okay, maybe he didn’t use the Time Tunnel, but those nefarious time-traveling, bomb-stealing Nazis showed up, just like I said they would!
I’m not saying Koontz used his idea-sucking, thought-theft device on me. He came up with that idea because it was a good idea. Vindication!
When I was about 9, Mom told me she and Dad were divorced. Years later, I was finally able to see far enough past the tip of my own nose to realize there had been a war in Viet Nam, though the truth seemed almost as strange as my lie had been. Maybe we can never make up anything as weird as the truth is.

But we can try, can’t we? Those holes in logic have to be filled somehow. Pardon me while I fetch my shovel . . .
Posted by Emily Devenport at 2:23 PM