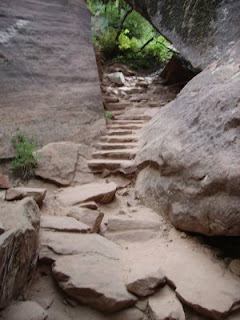 The brick & mortar business where I work has made me sign a document stating that if I talk about them online, I can be fired, so I won’t mention them by name. But I’m not mad at them for making me sign that paper. Because they’re up the creek without a paddle, and I can’t blame them for being freaked out about it. They’ve got a right to look after their reputation. God knows the retail giants aren’t doing anything else very well these days.

Unfortunately, the way most retail chains have reacted to the bad economy is to decide that they’ve got to start harassing the customer from the moment they set foot in the store and not let them go again until they have their name, phone number, e-mail address, and shopping preferences – and woe betide the customer who doesn’t also have a couple dozen frequent shopper cards. Furthermore, at my store I’ve been ordered to address you by name, no matter how much that may offend you. And you need to know my name too. If it’s any consolation, I’ll try to use your last name instead of your first, and I only mispronounce it about 35% of the time. I’ll try to mumble it so you won’t think I’m hitting on you.

But all of that “customer service” will do no good at all in the end, because I work at a book store, and within a few years, most book sales will be done online or with a phone app. Yes – I know everyone is saying that, and I also know there tends to be a gold-rush attitude about new formats and technologies that often turns out to be exaggerated. But in this case friends – it ain’t exaggerated. People are underestimating how big the change is going to be.

Forget all that stuff about how much you like paper books and how you don’t want to change. Because that’s just tough noogies. It’s not about what you want. It’s about what they’re going to give you, what they think they can do to turn a profit. Controlling costs is the only way big biz can squeeze the bottom line right now, and shipping around tons of paper is expensive. Zapping electronic bits in your general direction is way cheaper, and if you put it on a reader you like, you’ll get used to it pretty fast.

Don’t get me wrong, I love printed books. But I have to admit, I’ve been appalled at the waste I see in the book biz. We manufacture astounding amounts of trash every day at our location, just in terms of cardboard boxes and merchandising lists, just so we can build displays of things we want people to buy. But after all that effort, after all that paper and gasoline, most of the books that make it to our shelves get packed right back up eventually and shipped back again. It’s very Sisyphus-ian. Move that pile of sand over here, then move it back over there. On the small scale, no big deal. But we’re talking gigantic, and without easy credit to make it look like actual moolah is being made, the losses are apparent much more quickly than they used to be. So the electronic medium will sweep all that away. And how could that help brick & mortar stores?

Not one bit, actually. So they’re in complete denial about it. That’s why I’m wondering if you’d like a bag for your items, Mr. Smith. What was that phone number again?

The funny thing is, even if the brick & mortar chains crash, I don’t think amazon is going to be the only game in town. Google won’t either, even if they end up selling their own gigantic library of e-books. I think writers are going to control the e-book market, mostly because we’ll be able to set our own prices. We’ll tend to keep them really low, because we don’t have a gigantic overhead to pay for. Of course, we’ll be plagued by pirates and we’ll have to compete with millions of other sites for the attention of shoppers, but that won’t stop us. After all, we’ve been treated like dirt for decades, we’re used to trouble. We’re not easily discouraged, either. In fact, it’s scary how hard it is to get us to give up.


So here’s my advice to shoppers: don’t pay a lot of money for books, or movies, or music. Pay something, give writers and musicians a reason to keep making the stuff that entertains you, but don’t pay a high price for it unless you can’t live without it. If you think someone’s price for an e-book is too high, tell them so. They may lower it. Believe me, if you tell a book store clerk the same thing, they’ll just have to refer you to Customer Care. And there’s just one way a call like that can end.

“Thanks for shopping with us Mr. Smith. Have a nice day.”
Posted by Emily Devenport at 9:45 AM