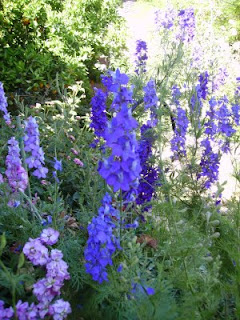 I’ve been gardening in Phoenix for about 10 years now, and I’ve learned that if I want the seeds I sow to sprout, I have to use the blitz approach. If I want 3 or 4 sweet pea vines to sprout, I have to sow 10 to 15 seeds. If I want a tub full of zinnias, I need to sow 50 zinnia seeds. If I want larkspur to tower above the scene, I need to take the dried-up old stalks in June and shake them over the area where I want them to grow the following year, a hundred little seeds or so.
After that, I need to shred old, dead matter from expired plants and gently sift it over the spot where I sowed the seeds. I need to water that area 2 to 3 times a week. Over the next several weeks, sprouts will appear. I call them spoinkers. This is because I imagine spoink! is the sound the sprouts make when their leaves pop out of the seed casing. All over the garden, it’s spoink! Spoink! Spoink! And those casings go flying.
I’ve tried a lot of flower varieties for my Phoenix garden, and I’ve settled on a few stellar performers. Sweet peas, zinnias, stocks, larkspur, celosia, snapdragons, and nasturtiums. If I’m lucky, one or two of the dozens of sunflower seeds I sowed will grow big enough to open a giant head.
But Nature is way better at sowing seeds than I am. Every year, several of the flowers that grow in my garden were sown by wind, and rain, and pooping birds. They don’t need to scatter shredded mulch over the seeds, they don’t need to fuss over them at all. Wild sunflowers bloom in several places, and I try to leave 1 or 2 of them where they are, because the birds and bees love them so much. I figure I owe them at least that much. Because no one has perfected the blitz approach half as well as Nature.
And thank goodness for that!
Posted by Emily Devenport at 7:38 PM

Email ThisBlogThis!Share to TwitterShare to FacebookShare to Pinterest
Labels: gardening in Phoenix