The Autobiography of an Idea Previously I blogged about ideas, specifically where writers get them. I mentioned that writers don’t have a problem thinking up stories, we’ve got the opposite problem. We’ve got too many damned ideas, so many that we can feel overwhelmed by them. But that doesn’t really answer the basic question readers are asking when they wonder where those ideas come from, so I thought I’d take another stab at it. Let me tell you where I got the idea for my Lee Hogan novel, Belarus.
Belarus was not actually the novel I intended to write. The novel I dreamed up was titled Shrouded Woman, the book that eventually was published as Enemies. One night Ernie and I went to visit Borders. Back in those days, Borders was a novelty, a gigantic book store where you could actually hang out. I was looking at the new books on the big tables at the front of the store, and one of them captured my attention. It was titled The Autobiography of a Face. The cover featured a close shot of a woman whose face was partially obscured by a veil. But even with all that fabric in the way, you could see her jaw was disfigured.
That author wrote about how cancer had changed her face and her life. Her image on the cover haunted me, I kept coming back to that book and looking at it. I didn’t buy the book, and I never read it either, mostly because the image on the cover had moved into my head and stared evolving into a character. I had no room in there for reality, fantasy had taken over the machinery.
When we got home, we discovered that a bunch of movies had arrived in the mail – we’d had the bad judgement to join one of those mail-order movie clubs, and our freebee-enticement selections picked that fatal moment to show up. We decided to watch Anastacia, starring Yul Brynner and Ingrid Bergman. For those of you who’ve never seen it, the movie is about a woman who may be the last survivor of the Russian royal family, an artifact of a lost world.
I went to bed that night and dreamed. In my dream, the lady with the veiled, disfigured face and the story of Anastacia had merged. By the time I woke up, I knew it was a story I had to write. I sat down at the computer and started to sketch out the basics. I asked myself why the lady at the center of the story was disfigured. Then I puzzled over why the society she lived in would insist she hide her condition behind a veil, and why that society should resemble imperial Russia, especially since it had been transplanted to another world. Why should anyone do that? What did they find when they got to that world? I already knew an alien race lived there – who were they? Why were they there? 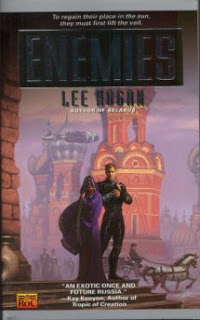 I kept asking myself the questions whose answers would explain the lady. That’s how I pieced together her back-story. But I felt I had to explain that back-story to my editor at ROC when I pitched the book (otherwise she might not understand why the shrouded lady should exist), so I wrote a 35-page treatment instead of the usual proposal. I had already written 7 other books for ROC, and the last one, Broken Time, had been nominated for the Philip K. Dick award. I thought I could get away with it. And I was right — sort of. My editor loved the back-story. So she wanted me to write 2 novels instead of 1, and the first would be about Andrei Mironenko, a sketchy-yet-important character, the guy who had founded the planet Belarus.
"Sure!" I said confidently.
Belarus turned out to be the hardest book I’ve ever written. It was a multi-viewpoint, third person narrative full of brilliant, complex characters. I made the mistake (thinking I’d never have to actually write the scenes) of promising 2 wars in the story. And I knew almost nothing about imperial Russia. I hadn’t a dime to hire a researcher and I was holding down 2 jobs at the time. I ended up making a few historical boo-boos that were pounced upon by a couple of reviewers on amazon (I’ll be fixing them in the upcoming electronic edition), but that wasn’t even my major concern at that point. I was busy dreaming up a world.
So remember, we started with a picture of a lady on the cover of a book and a half-digested movie, glommed together. They ended up in the Cuisinart of my dreams, and I asked myself a bunch of questions to explain a few things. Then BOOM, a contract. The fun part was behind me, the pick-and-shovel work took over my life. Time to mail an SASE to that Idea Company and buy some help. Only there IS no Idea Company, there’s just my feverish imagination. And the amazing part? That’s enough.
I started with a sketchy idea. As I wrote each section, characters just showed up. I didn’t plan them, I rarely thought about them. They walked into the room and tapped me on the shoulder. They knew what they were going to do and why. Most of them were a complete surprise to me, and that includes my favorite character from both books: Baba Yaga. She was the easiest one to write, she was the magic that made the whole shebang come together.
But don’t get me wrong, I didn’t sit down every day and channel all these folks. Some of them took a lot longer to arrive than others. I often sat down feeling baffled, and I often got up the same way. Some sessions I only managed a paragraph or two. I had to finally set myself a quota of ½ page per day, because I didn’t think I could accomplish a whole page. Having set myself the challenge of figuring out how a space war might be fought, I had to conclude it was a ridiculous notion. I conferred constantly about the technologies that might be involved with my super-smart husband, Ernie. The whole mess creeped along, one shambling step at a time.
But eventually, the machinery I was constructing began to run on its own, and Belarus took on momentum. Once that happened, I was able to write several pages a day, on one memorable occasion turning out 25 pages in just a few hours.
Ideas come from the subconscious. When you train yourself to retrieve and shape those ideas, they take on a life of their own. It’s sort of like having your own Central Casting, a mob of method actors who are convinced there’s no business like show business. Sometimes they’re brilliant, sometimes they’re corny, but they’re always THERE. You’re stuck with them. They’re stuck with you. Once you’ve written about them, they’ll move into other people’s heads, even if those people don’t remember where they got them.
Ideas think themselves up.
I hope that answers the question. Even if you didn’t ask.
Posted by Emily Devenport at 6:19 PM

Email ThisBlogThis!Share to TwitterShare to FacebookShare to Pinterest
Labels: Belarus and Enemies