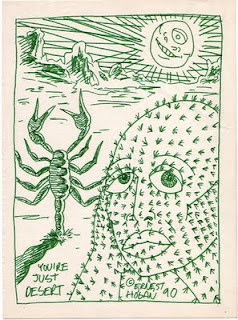 There are many perfectly innocent questions that readers ask writers, but the one that’s most likely to make some writers go ballistic is Where do you get your ideas?
Not all writers go ballistic, we know these folks are actually asking, how we get our ideas, not where (as in some town that ships out ideas in little boxes). People who don’t make up stories wonder how it’s done, what’s the magical process, what arcane lore do writers possess that allows us to invent entire worlds, fill them with people, then (coherently) chronicle their adventures? These same folks might be a little freaked out if they found out that writers get their ideas from the same places lunatics get their obsessions, delusions, and hallucinations, and that the mental condition that causes some people to compulsively check the stove 25 times in a row to make sure it’s really off also prods us into writing about stuff that never happened to people who don’t exist.
The truth is not very romantic, I’m afraid. And furthermore, writers aren’t either. You’ll find the same spectrum of personality among writers as you would find among teachers, lawyers, construction workers, sales clerks, and everybody else. Some writers are open-minded, good-humored, and nice to puppy dogs, others are nasty rotten twits. Most of us are somewhere in between.
Yet despite our real-life limitations, it’s possible for us to write about anything, from anyone’s point of view. Our characters may be saints, serial-killers, soldiers, kings, beggars, dogs, aliens, even talking coffee pots. We write from these points of view with varying degrees of success, but the point is, we can at least imagine the universe from their perspective. I think that’s one of the traits all writers share.
But to be a successful writer, you need two extra things: drive and the ability to learn. Drive is going to keep pushing you through unknown territory as you wrangle your story from its beginning to its end. And you will learn how to do it as you go, not just that first time but every single time you sit down to write. Once you’ve done it enough times, coming up with ideas won’t be a problem. In fact, you’ll have to beat ideas off with a baseball bat.
And that’s actually another problem. You end up with too many ideas. You’ll often feel compelled to scribble notes for them, do rough outlines if the idea is a good one, and you end up with twenty or thirty novels-in-progress at any given point in time. Even if you don’t have a day job (and most of us do) you couldn’t possibly write all of these novels, not if you want to do a good job of it. And that can paralyze you, much in the same way a sink full of dishes makes you want to avoid doing the dishes at all costs.
So how do you get past that? You pick a spot and start. Sometimes you have a false start, so you pick another and try again. You commit to a particular story and you finish it, come Hell or high water. That’s where drive comes in. If you try to rely on inspiration, you’ll start writing a hundred books and drop every one of them when the work gets too hard.
I’ve written fourteen books in about twenty years. That’s not counting another twenty that are about half finished and yet another twenty that are just in the form of rough notes. If I’m lucky, I’ll get to keep writing books as long as I want to, until I croak in front of my computer (or whatever gizmo takes its place). Getting enough ideas probably won’t be a problem, even if I get over the need to write and develop some other all-consuming pastime. No, I suspect my problem will always be too many ideas (and too many dishes, for that matter).
So pardon me while I pick a spot and get started. And pass the dishwashing liquid.
Posted by Emily Devenport at 9:46 AM

Email ThisBlogThis!Share to TwitterShare to FacebookShare to Pinterest
Labels: how to write novels