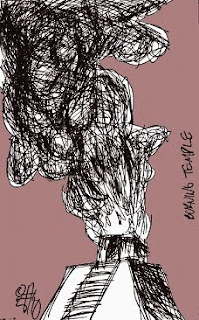 I've done some writing about a certain Big Box Bookstore, and the big mistakes the company has made in the eleven years I've worked for them. And I can't say that this article is going to diverge that much from my previous themes. But there's something about working for a Big Box Bookstore that rarely gets mentioned in blogs about What Went Wrong. It's something that is still, mostly, the fault of the Big Box Company, since it's an HR issue – a matter of how you supervise personnel and divide labor. It is simply the fact that when I began working for this Big Box Bookstore eleven years ago, it was Goof-Off Central.

By the way, I signed an agreement promising not to talk about the company (by name) while I'm working for them. Technically, I'm probably pushing it by writing these blogs, but I'm not just kvetching. I'm trying to cast some light on how/why this particular sort of business tends to fail.

So – back to Goof-Off Central. I'm not exaggerating when calling them this. When I started working for the company, it was actually possible for an employee to spend an entire day pretending to work. Here are some examples.

I worked in the music department. When I started, this department had a full-time supervisor, an assistant supervisor, a lead clerk, and four full-time employees. (By the time I left, there was just me.) We had enough people to scan in, unpack, sort, keeper, and shelve all the product that came in (three shipments a week). We could easily have had perfectly alphabetized shelves, properly stocked displays, well-stocked listening stations, properly stickered product (sale stickers), etc. Instead, the section was utter chaos. Stock backed up for weeks, the sections were poorly organized and lacked any alphabetical order, CDs often had two different sale stickers on them, and many listening stations stood empty.

Why? Because employees spent their time goofing off. And management didn't seem to know how to motivate them. I could have played along with this attitude and goofed off too, I would never have been criticized. Not as long as I showed up for work every day.

Employees ignored ringing phones. They ignored back-up calls to the register. They avoided customers on the floor, when they could. They shelved books wherever they would fit, rather than where they really belonged. They spent hours in the back room sorting books into bins and gossiping with each other. Those books never made it to the floor, and eventually got returned.

I decided early on to take some initiative. It wasn't that I expected to be rewarded – I was simply bored. So I started at one end of the music section and alphabetized the whole thing. It took about a month. No one realized I was doing it until I was halfway through. Once I had it well organized, I could shelve quickly and accurately. I was given responsibility for merchandising after that; then for setting up monthly listening-station programs. My GM appreciated my work, and I got regular raises and high marks on year-end performance evaluations. They didn't ignore my good work. But most of the time, the supervisors seemed to be focused on other stuff. In fact, I always got the feeling that the day-to-day operations of the store were a huge bother to them, almost beside the point.

I remember one incident when my husband and I arrived for work to find one employee at the register. She had a long line and was desperately calling for back-up. We hurried to the office, assuming no one was available to help her, so we'd better clock in fast and get up to the register. We entered the office and found eight supervisors sitting at their desks, laughing and gossiping with each other – and ignoring the back-up calls. They felt it wasn't their job to do the actual sales-clerk work in the store.

Eight supervisors. I'm amazed when I think there were that many of them in the store at one time. On some days, they outnumbered the sales clerks. I hated their attitude concerning grunt work, but in retrospect I realize it was right in line with upper management. We had a big conference room in our store where regular company meetings were held, and I briefly interacted with several executives over the years. I say briefly interacted because these people barely seemed to realize I existed. Their sole job in the company seemed to be to have lunch and attend meetings. They spent their days generating catch-phrases and spouting business philosophy at each other.

How could they get away with it? Because – for many years this Big Box Bookstore could sell just about anything. People were eager to go there, drink coffee, meet people, buy books and CDs. This was 1999, 2000, the first half of 2001. Back in the 90s, during the heyday of this particular chain, the money flowed like the Mississippi. It didn't start to tank until the 9/11 tragedy.

But it wasn't just 9/11 that did them in. It was a long list of bad business decisions and technology shifts, many of which are being discussed in online articles at PW and various other websites. But what is never discussed is the idea that big companies are inherently wasteful. They seem to be havens for friends, family, and cronies – people who get their jobs partly because of nepotism and partly because of the mistaken belief that executives are necessary to run a company.

They're not necessary. They are an artifact of the upper class. Executive-level jobs are a way for them to draw huge salaries and exercise power. They don't do this maliciously; they really believe they know better and do better than line employees. They can come up with numbers to prove it. Those numbers seem valid until the whole mess comes crashing down.

I'm not suggesting that we adopt communist values and build guillotines to rid ourselves of executives. I'm suggesting that we begin to exercise some common sense and stop creating situations were executives (and other employees) can work at Goof-Off Central. There wasn't one employee at Big Box Bookstore above the GM level who was necessary to run that particular company. Everything those overpaid executives did could have been done at the store level (except for Accounting, which could have been contracted out).

Line employees could have been paid better, with more merit raises for people who actually worked harder. Stores could have established closer relationships with vendors AND customers, ordering things that their local clientele actually wanted. Signs could have been printed by local printers, GMs could have had regular conference calls with each other to share winning strategies.

Yes, we all would have worked harder. But maybe we would have realized early on that we needed to develop a good website. For years, we line employees who actually gave a damn tried to tell our company what we thought needed to be done, based on our day-to-day experiences with customers. They blew us off, because we were line employees. If we had any smarts, we'd be executives, right?

So maybe we line employees would have failed too. After all, Amazon came along, and e-readers, and a crappy economy. Music, movie, and book vendors never realized their prices were too high – they never took steps to cut their own unnecessary costs. 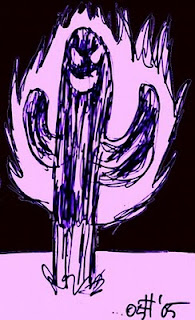 But at least we wouldn't have been Goof-Off Central. In my opinion, that would have been a worthy accomplishment.

Posted by Emily Devenport at 5:40 PM