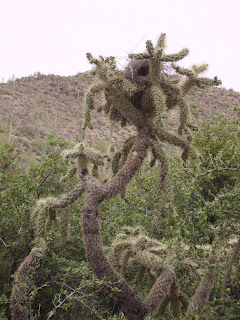 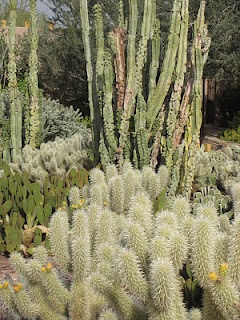 This isn't something you would necessarily believe if you only visited Phoenix. Not if you've never been to the Desert Botanical Garden, or the Heard Museum – not if you feel beauty is only solid green and humid. I admit, it's easier to appreciate Arizona if you like geology, lightning, birds, and giant, columnar cacti. You may think you'll only see desert vistas here if you don't know that our highest peak is around 12,600 feet and that we have snowy, forested mountains as well as deep, dry basins.

But I admit our reputation as a desert state is well-earned. All four of the great deserts of North America dangle their toes into Arizona. To the North is the Great Basin Desert, spilling over our border from Utah and Nevada – it's a rain-shadow desert full of scrubby sage-brush. In the North-West is the Mojave, whose most famous feature is Death Valley, another Wonder of the World – its signature plant is the Joshua Tree. From the South-East, the Chihuahuan Desert spills into Texas, New Mexico, and the South-Eastern basins of Arizona – it harbors shrubs and small, tough cacti. But the biggest desert in Arizona is the Sonoran, in the South and South-West. It's the only place in the world that has two rainy seasons. And the Sonoran is the American desert with the warmest winter. That's why we're the only place in the world where the Saguaro grows. 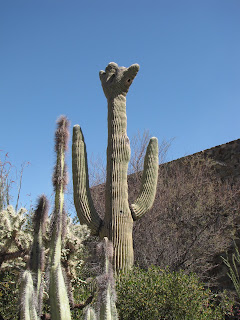 Stand alone in the open desert among a group of saguaros, and you won't feel alone. They live between 100 and 200 years, and they have a presence. Think of them as the Ents of the desert. They can be a scruffy lot, and they often make faces at people. Some of them look more dead than alive. But some of them top 50 feet, and one famous guy has over 100 arms. 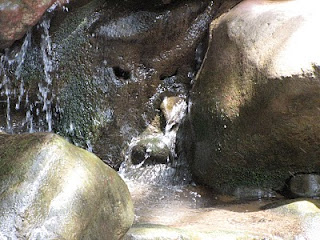 Arizona is Geology Heaven, a place where the rocks aren't “haired over” by vegetation. We have a long, varied volcanic history, starting about 1.7 billion years ago when our chunk of North America plowed into the ancient Canadian Shield. The Grand Canyon is unparalleled in its ability to represent millions of years of sediment laid down by shallow seas and by lakes, rivers, and even sand dunes. But Arizona is one, giant erosion feature – we have many other canyons. Oak Creek Canyon is an enchanted place with deep red sandstone. Walnut Canyon is carved from the same cross-bedded Coconino sandstone and Kaibab limestone found at the top of the Grand Canyon. 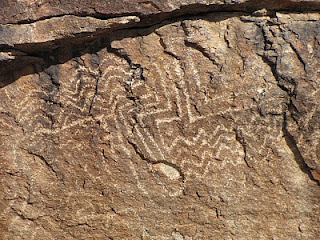 Despite decades of plundering by fools and yahoos, the Petrified Forest features the best examples of petrified wood in the world. You can see petroglyphs on Newspaper Rock and near one of the preserved archaeological sites in the park. But my favorite thing about Petrified Forest is its bizarre Chinle layer, which doesn't quite look like any other sedimentary group I've ever seen. It's made up of shale, silt, mudstone, a little sand, and silica from volcanic ash. It's colors range from blue to red, pink, brown, green, yellow, tan – based on whatever trace elements are present. 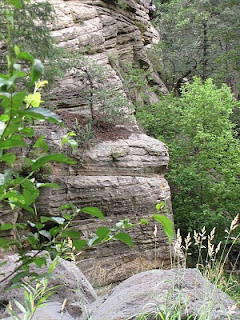 We have a meteor crater. We have a volcano that last erupted about 1000 years ago. We have more bird species than any other state in the union. We have thunderstorms that sound like atomic explosions. We have snowstorms AND sandstorms. We have the best Mexican food in the southwest (stop squawking, Texas and New Mexico – you know it's true). Navajos and Hopis own most of the North-East part of our state – a place that looks a lot like Mars. The Spaniards never successfully colonized us, thanks to the Apaches and their original Homeland Security. The coldest winter temperature on record for Phoenix was 16 degrees Fahrenheit – the hottest summer temperature was 123 degrees Fahrenheit.

And we're good-looking, too. Though we can be a scruffy lot. And some of us make faces at people.

If you're thinking of visiting, try all of those places I mentioned. You'll be amazed. But you'll barely scratch the surface of what's here. I've lived here over 50 years, and I'm still exploring. Sometimes I dream of visiting other places. Sometimes I even go. But I'm like the saguaro. This is the only place I can live. 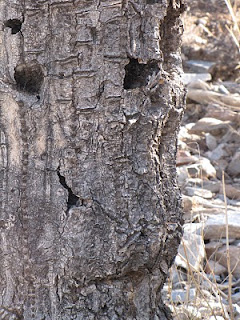 Posted by Emily Devenport at 8:37 PM