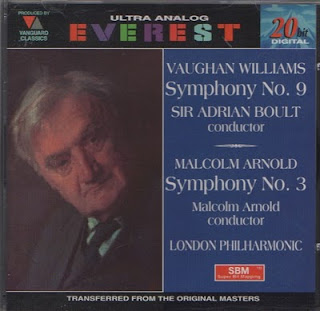 This is an historic recording for those who love music: Vaughan Williams Symphony No. 9 (conducted by Sir Adrian Boult) and Malcolm Arnold Symphony No. 3 (conducted by the composer), on Everest, EVC 9001, produced by Vanguard Classics. I bought mine on amazon.com, from the "new & used" section.

I love Ralph Vaughan Williams' 9th Symphony; to me it is a mixed bag of emotion. It always sparks cinematic images in my imagination, (all of my favorite RVW music does that for me, it's easy to understand why he was invited to write film scores). Perhaps because I'm American, I hear passages in the 9th that remind me of Bernard Herrmann and Aaron Copland. I own the historic Adrian Boult recording. When I played it again, just before writing this review, I imagined a world full of grandeur, danger, mystery, ruined in some places, but full of fascinating corners. There's a theme in the second movement that makes me think of tragic love, and I am particularly fond of the quirky third movement, which reminds me of marching robots. In fact I think RVW's 9th symphony would have made a fine soundtrack for Part 3 of Jackson's LORD OF THE RINGS movie trilogy. So I'm startled when I read that so many people feel its tone is bleak and ultimately hopeless.

I wonder if the answer lies in the fact that the emotions in Vaughan Williams' music are so complex. The first RVW piece I ever heard was the Thomas Tallis Fantasia, which pierced me to the core. I had never heard music that evoked the natural world so perfectly, yet was also deeply spiritual. My favorite piece is "The Lark Ascending," which always reminds me that emotions have two sides. For every moment of joy, there's the knowledge that sorrow exists too.

My favorite movement in the Pastoral Symphony is the 2nd. When I was writing my fifth novel, I listened to it over and over, trying to catch the tone. I mentioned it to my brother the other day, and once again heard the "b" word (bleak). And considering that RVW wrote this symphony when he was serving in France during World War I, this interpretation is justified. But it seems to me he must have seen some beautiful, lonely places during this time. I've lived in Arizona all my life, a state full of beautiful, lonely places that many people might consider bleak. I hear that 2nd movement, and I see beautiful-lonely. I hear RVW's 7th symphony, and I see Scott trekking into Antarctica, but I also see an expedition to Mars. When I hear the 5th symphony, I often see the Grand Canyon, though it couldn't be farther from London during WWII. I hear the 9th and wish I were a fantasy film maker, so I could use it as a score.

Okay, I'm a bit of a kook, and my other musical preferences are eclectic, everything from Rachmaninoff and Prokofiev to Respighi, Grieg, Debussy, Liadov, etc. Much as I love these other composers, no one speaks to me as clearly as Ralph Vaughan Williams. In the last movement of his 9th, I can see things clashing, falling down, coming apart, but the strings and that subtle harp at the end seem to suggest that the stars continue to shine down on us anyway, and maybe the things that fall apart are the things that should.

There's one other important fact about this historic recording: In a brief introduction, Sir Adrian Boult tells us that Ralph Vaughan Williams passed away the night before. This places the recording firmly at a momentous point in history. I suspect that's why the Arnold Symphony is also included here, since the composer is conducting his own work. This recording is a cherished one in my collection.

Posted by Emily Devenport at 9:35 AM